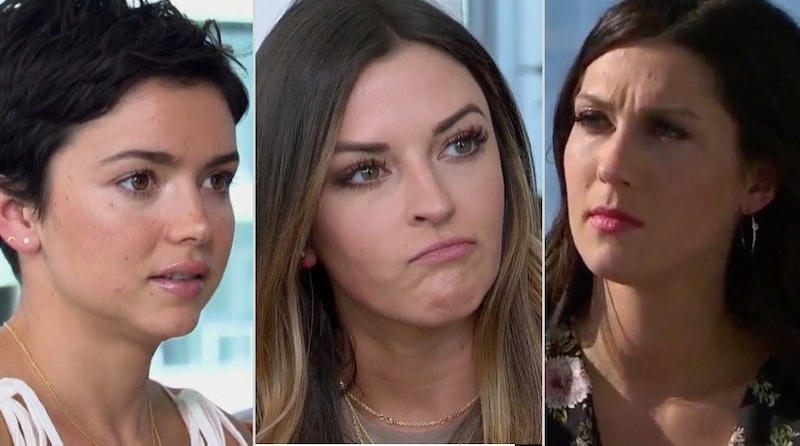 After competing on Arie Luyendyk Jr.'s Bachelor season, Bekah Martinez has plenty of opinions about the franchise, and she's dishing all to Bustle. Read what Bekah has to say about Becca's Bachelorette season and the Becca-Colton-Tia love triangle in this week's recap.

Ah, hometowns! While this specific episode of the season normally bores me to tears, I thought we got some great insight in the final four, plus a little girl drama.

I don’t have much to say about Garrett. He and Becca do seem very in love. I’m not going to lie, I’m still not over Garrett’s Instagram likes. Knowing his underlying feelings on such incredibly important topics is unsettling and makes it hard for me look at him apart from it. Plus, I missed his hometown date because I got stuck in traffic on the way home from work. Moving on!

I really like Jason, but his relationship with Becca is so clearly behind the others'. Becca and Jason look like they’re on the third date while Blake and Becca and Garrett and Becca are already on year two.

I just don’t see Jason making it past fantasy suites, which I’m assuming will happen since Becca can’t seem to stop mentioning their chemistry. However, Jason and his family did seem very sweet, and his mother has aged beautifully.

UGH, BLAKE. I’m about to go into gush mode. I’ve really fallen for him throughout this season, and it’s obvious Becca did from the start. He seems to be consistently vulnerable, open, and comfortable around her.

Blake seems like one of the few men who is unmoved by the fact that he is on a TV show. His conversations are always honest and earnest, with no trace of self-consciousness. It was awesome to see his relationship with his dad. It’s obvious they have a special bond — Blake was so vulnerable with his dad, and his dad was so tuned in and attentive. I always think that’s a good sign; having a supportive, present father probably means Blake has a higher chance of becoming one!

Colton is sweet. He really did seem like he cared about Becca. I feel bad that most of the dialogue surrounding him has been about his virginity and his ex-girlfriend.

I’ve already said more than necessary about the Tia/Colton thing. This is not a personal vendetta against Tia, it’s strong feelings against this all-too-common girl behavior: holding a friend responsible for feelings that are not her responsibility to deal with.

Here are the facts: Becca was a good friend from the start and wanted to dump Colton for fear of hurting Tia. Tia came on the show when Becca and Colton's relationship was still fresh and gave them her very clear blessing. She also repeatedly downplayed her prior relationship with Colton, saying it was never serious and there were zero feelings left. It took Becca a lot to get over her apprehensions about Tia and Colton’s past, and then she apparently did. Then, Tia waited until it looked like Becca might actually be seriously into Colton (hometowns) before saying something.

If you give a friend permission and blessings to pursue a relationship with an ex, it’s not fair to change your mind when you see them happy together.

I think it’s obvious that Becca and Colton’s relationship wasn’t going to make it to the final rose. Therefore, people will shrug it off saying it doesn’t matter. But what if Becca HAD been head over heels for Colton? Tia had no way of knowing, but what if Becca saw Colton as her number one?

Tia put Becca in the awkward situation of choosing between her friend and a man she could have potentially been in love with. She put her feelings before Becca’s in this situation. If you give a friend permission and blessings to pursue a relationship with an ex, it’s not fair to change your mind when you see them happy together. Yeah, it was honest, but also, it didn’t need to be said. (Trust me, I have a bit of experience with saying things that should probably just stay in my mouth.) At the end of day, I think it was a bit unnecessary and selfish. Tia is not a bad person, but I don’t think she should have went on the show to put pressure on Becca for feelings she should have dealt with privately.

Speaking of dealing with things privately, next week is fantasy suites, and you better believe I’ll be tuning in. Until then!