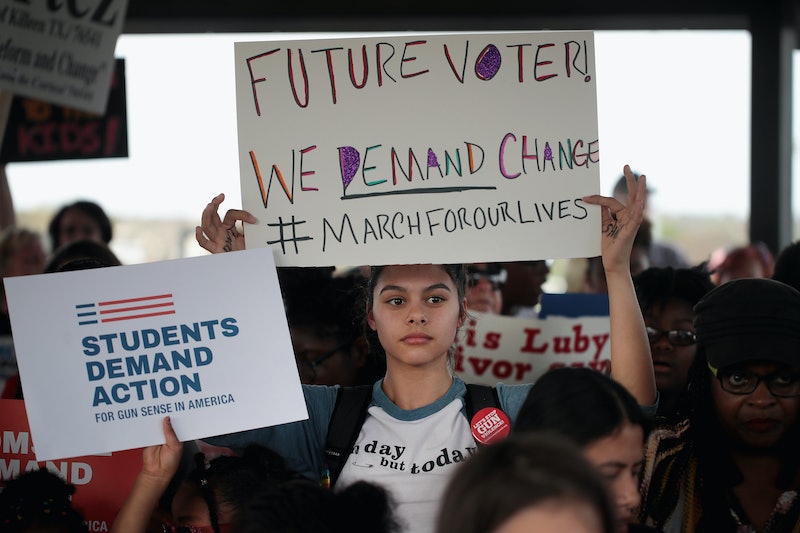 Nearly two decades after the Columbine High School massacre, the school's current students have launched a new initiative to end gun violence. Columbine students' #MyLastShot project calls on people to allow photos of themselves to be publicized if they ever become victims of gun violence, in an effort to spark change.

#MyLastShot calls on people to place a sticker on their driver's license, ID card, or another personal item as a way of giving permission for their photos to be publicized. The initiative also calls on people to designate an advocate to ensure that the wish expressed on the sticker is carried out.

"In the event that I die from gun violence, please publicize the photo of my death," the sticker reads, per #MyLastShot's website.

Current and former students from Marjory Stoneman Douglas High School in Parkland, Florida — where a gunman killed 17 people last year — were among the first to participate in the #MyLastShot initiative, with March for our Lives activists like David and Lauren Hogg sharing photos of their ID cards on Twitter.

"The power of photography is immense," the student organizers behind #MyLastShot tweeted on Saturday. "It’s Emmett Till sparking the Civil Rights Movement or ‘Napalm Girl’ helping to end the Vietnam War. — photos that exposed the worst of humanity, and brought out the best."

In a promotional video announcing #MyLastShot, the project's organizers expressed their hope that the "graphic images of our deaths" will spark change when statistics, studies, and even individuals' names will not:

As Denver7 News pointed out, media organizations don't regularly publish graphic images of mass shootings or other crime scenes, in compliance with guidelines from the Poynter Institute. However, the students behind #MyLastShot hope that the publication of these photos will "change the world for the better."

"When a shooting happens, we're sheltered from the horrors behind every headline," one of the organizers said in the promotional video. "No more."

According to Axios, #MyLastShot organizers have already sent out nearly 4,000 stickers to students across the country, and David Hogg asked for 100 stickers on Thursday. Hogg has been an outspoken advocate against gun violence ever since he survived the Parkland shooting in February 2018.

Like the students from Parkland, many survivors of the Columbine High School shooting in 1999 have been passionate gun violence prevention activists. According to Vox, the Rebels Project — which serves as a resource for mass shooting survivors — set up a pen pal program between Columbine and Parkland survivors after the shooting at Marjory Stoneman Douglas High School. Some Parkland students also traveled to Colorado last year for the 19th anniversary of the Columbine shooting, CNN reported, even though most of them hadn't yet been born in 1999.

The #MyLastShot initiative is student organizers' latest effort to challenge gun violence, and it was unveiled just a month before the 20th anniversary of the Columbine shooting. Current Columbine students hope that publicizing photos of mass shooting deaths will prevent people across the country from ignoring "the true horror of what’s happening," and compel them to fight for change.