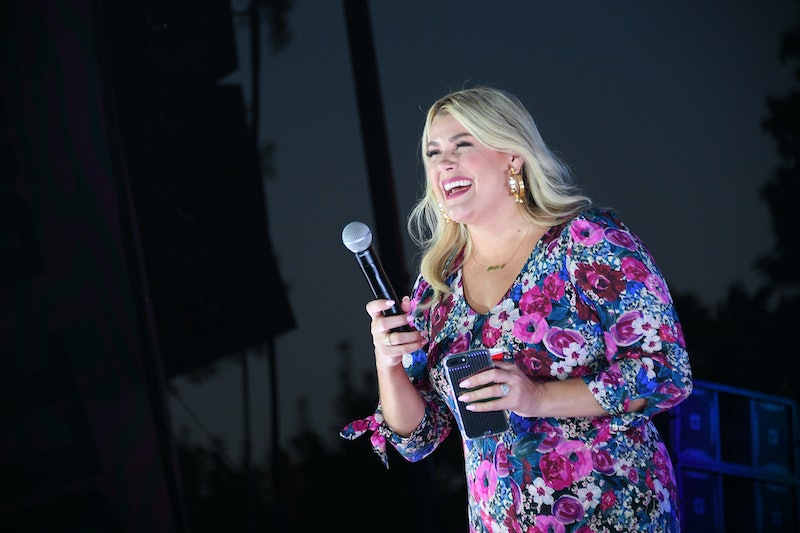 As we're walking through the Bustle office, comedian and actor Heather McMahan’s eyes curiously dart around. “I could never work in an open space like this,” she says. “My voice is too loud, I would sound like a sex hotline worker.” Her booming sound — perfect to fill the corners of the comedy clubs and theaters she often performs in — took over Brooklyn's Prospect Park in September during Bustle's Rule Breakers festival. It can more recently be heard in her 16 city sold out tour, The Farewell Tour — and yes, she's managing expectations by calling her first ever tour The Farewell Tour.

McMahan herself is a bit of a nomad; though she’s lived in Los Angeles and currently New York, McMahan proudly hails from Atlanta. Following her father's death in 2015 — one of the "darkest times" of her life — McMahan suspected that her career would be put on hold. "I was like, great, here I am sitting in this situation where I have to take care of my family, and I thought my career was going to stall."

However, it only gained momentum.

Let's talk about how you probably know McMahan. It might be from her first, and "possibly last," tour. Or maybe her podcast "Absolutely Not." Or, you might be one of her 400,000+ followers on Instagram, where she's made a name for herself by posting parody videos of herself as Ina Garten, or Tiffany from Decatur, or Instagram stories calling out Best Buy over a faulty TV shipment. It was this type of content that McMahan credits to her brand taking off, when she began having "genuine conversations about what was going on in my life." Listening to her on Instagram makes you feel as if you invited a tell-it-like-it-is girlfriend over for a weekly wine night (McMahan likes to "Chard So Hard"), where the two of you bond over the hell of simply going to the post office or whether or not mercury retrograde can be blamed for everything.

If Joan and Conan had a baby, it’d be Joan O’Brien.

McMahan’s humor combines observational comedy and self-deprecation, but she ultimately describes her brand as "joyful." Though she uses her life experiences as comedic material, McMahan’s inspiration comes from figures that have long spearheaded the comedy industry. She describes herself as a mix of Joan Rivers and Conan O’Brien. Drawing from Conan's self-deprecating humor and Rivers' bluntness, she laughs, “If Joan and Conan had a baby, it’d be Joan O’Brien. That’d probably be my real stage name."

McMahan’s comedic work holds much more meaning than solely amusing an audience for a night. If her Instagram world is a place where she can play dress-up and make stories out of the everyday strangers she encounters, her weekly podcast, “Absolutely Not,” is a safe space for more serious issues. “It’s like you’re either supposed to talk about beauty or murder mysteries,” McMahan says about the female podcast space. And while you should never say never when it comes to the comedian, she has managed to carve out a spot for her listeners that isn't afraid to take on serious topics. For instance, in Episode Nine, titled "Ya Peaked," McMahan was joined by friend and celebrity makeup artist Jamie Greenberg, who had similarly lost a parent to cancer. McMahan continues, “So many people reached out to me after that episode and said, ‘Holy sh*t, I needed to hear that.’”

It's the more serious issues that McMahan also finds the humor in, regardless of pressure to be politically correct. Despite the loss of her father to cancer, she makes it clear that cancer jokes are fair game. In fact, she says that those who want to be offended can stay home. Hoping to find common ground with her audience, she states, “In comedy, our job is to go out into the world, observe things, and take all the information, peel back those layers and make fun of it so it’s relatable, and we can learn from it.” She continues, “If I can’t talk about that situation, and have someone connect to it, then what are we doing here?"

As for what’s next for McMahan, a Netflix special wouldn't be bad. "I still want to get out there and work on new material and build that story." Although McMahan thinks she couldn't work in an open space, she already has been. Shedding figurative and literal borders, McMahan has been working the open spaces of her comedic performances, free of anyone's creative control but her own. And she intends to keep it that way.

More like this
Everything We Know About Jerry Seinfeld's Pop-Tart Movie
By Radhika Menon
What Does The Presley Family Think Of 'Elvis'?
By Arya Roshanian
RHOA’s Kenya Moore Said Her Friendship With Marlo Hampton Is “Too Far Gone”
By Brad Witter
Thandiwe Newton’s Dating History Includes This Megastar & A Rising Musician
By Alyssa Lapid
Get Even More From Bustle — Sign Up For The Newsletter