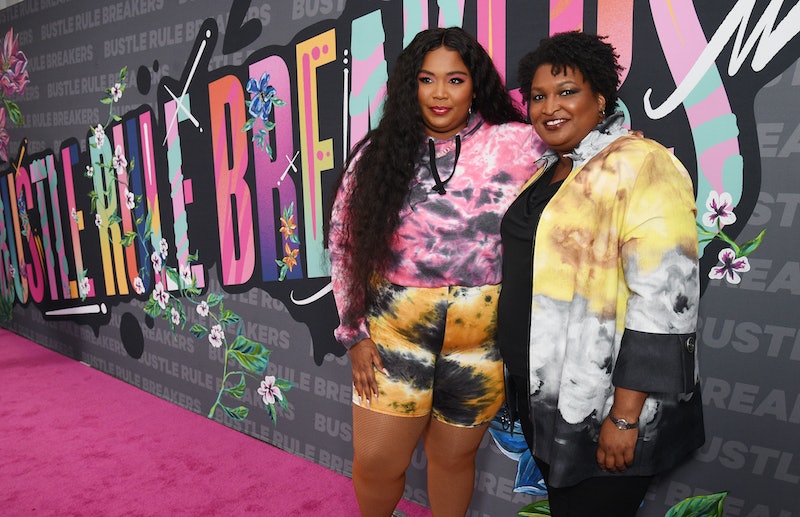 Bustle's 2019 Rule Breakers festival had it all: performances from some of the coolest women in music, inspirational surprise guests, all kinds of freebies and goodies, tons of glitter and flower crowns, and most importantly for any festival, lots of amazing food options. Everything that happened at Rule Breakers 2019 was part of its bigger mission to celebrate music makers and trailblazers who are challenging the status quo, and writing new rules for us all.

The event brought fans and some of the year's most inspiring game changers together at The LeFrak Center at Lakeside, Prospect Park in Brooklyn, on Sept. 21. Attendees were able to participate in all kinds of activities, like riding around the lake in "batboats" inspired by the CW's Batwoman, and stepping into the mysteries of the upcoming Nancy Drew series in a special Nancy Drew-inspired cocktail lounge. They were also treated to guest appearances from stars like Busy Philipps, Katelyn Ohashi, Valorie Kondos Field, and Stacey Abrams — all of whom were profiled in Bustle's digital Rule Breakers issue, just in case you need a little more inspiration for the week ahead.

And then, of course, there were the day's musical performances by artists ABIR, Jesse Jo Stark, Betty Who, and Lizzo. "I think the women playing today are so powerful and beautiful and strong," Stark told Bustle on the pink carpet before hitting the stage. "I think the event is beautiful itself." But even before they started singing, there was plenty to get excited about at Rule Breakers 2019 — just take a look at everything I did during the day.

Kicked Off The Day With An Empowering Yoga Session

Everyone who wanted to start the day with a good dose of zen arrived at Prospect Park right when the doors opened at 1 p.m., in order to take advantage of the Y7 and Athleta yoga class. Instructor Angelica Wilson got everyone feeling powerful and prepared to take on the day ahead, while DJ AMRIT helped guests flow from one pose into another with an energizing hip hop set, making this basically the coolest yoga class ever.

No festival is complete without amazing photo ops, and the WNBA Tunnel — which was one of the first things guests saw upon arrival — certainly fit this bill.

Looked To The Future With Tarot Card Reading

Everyone loves a good tarot card reading — and I do mean everyone, based on the long lines for one-on-one readings in the sunshine that stretched around the park. Afterwards, guests hit up the Visa Money Milestones booth to learn about their financial futures, before kicking back and relaxing with a glass of rosé to ruminate on what was written in the stars for them.

Anyone who wanted to feel like the hottest thing on four wheels headed straight for the Michael Kors roller rink, where they danced and skated to a groove-worthy set from DJ Natasha Diggs and DJ Rashida. They also got the chance to skate alongside the stunning Michael Kors roller dancers, who showed off their impeccable choreography in the middle of the rink.

Made Some Wickedly Wonderful Flower Crowns

You can't have a music festival without flower crowns — but, since this is Rule Breakers, no ordinary flower crown would do. Instead, guests had the chance to make their own devilishly cool flower crowns inspired by the upcoming Disney film, Maleficent. Afterwards, there was free, green-and-black ice cream to tuck into, because that queen is nothing if not a total trendsetter.

Got Festival-Ready Makeup At The e.l.f. Cosmetics Glitter Lounge

In addition to the flower crowns, it was hard to spot anyone in the crowd who wasn't rocking a face full of glitter, courtesy of the e.l.f the Rules! glitter lounge. (Yes, it was basically like spending the day inside an episode of Euphoria.)

Cooled Down With St. Ives

St. Ives gave guests an opportunity to cool down and freshen up throughout the day with its refreshing misting station.

Charged Up At The Fossil Gen 5 Lounge

When you're at a day-long event with photo opportunities at every turn, you're going to need a chance to recharge. The Fossil Gen 5 Lounge provided the perfect place to do just that.

McMahan hosted the day's activities on stage, introduced special guests, and got everyone in the right mood to party thanks to her infectious energy.

Rocked Out With ABIR

Singer ABIR got everyone on their feet with her sultry vocals and soulful songs — basically, the perfect playlist for jamming out with your friends on a Saturday afternoon.

Ultimate cool girl Jesse Jo Stark took the stage on Saturday afternoon with a rocking performance that made everyone in Prospect Park stand up and take notice.

Got Inspired By Busy Philipps

Busy Philipps, who's been a major advocate of women's health and reproductive rights, used her time on stage to inspire others. "I just refuse to let our collective stories go unheard by the old white men passing horrendous, restrictive, and dangerous laws," she told the crowd at Rule Breakers. "I decided to take the power back, and I decided that we have to be as loud as we can doing it."

After going viral with her perfect 10 floor routine earlier this year, the UCLA gymnastics alumnus flipped her way back into everyone's hearts onstage by showing off some of her jaw-dropping moves alongside her coach, Valorie Kondos Field. It was a moment full of joy, excitement, and impressive acrobatics.

Took A Break In The Plan B One-Step Lounge

After all of the excitement of the day, it's not unusual to want a moment to sit down and regroup — and the Plan B One-Step lounge had the perfect opportunity for that. Guests could relax in stunning, pop art-inspired chairs to listen to inspiring spoken word pieces from Aija Mayrock, or take a moment to inspire others with the "I've Got This" mural.

Relaxed at the Rita's Oasis

If some R&R was still needed after all the excitement happening by the stage, the Rita's Oasis was there for refreshing drinks and a tropical-inspired nail art bar.

Danced Until The Sun Went Down With Betty Who

Rule Breakers was packed with performances designed to get the crowd on their feet, from Jesse Jo Stark's cool-girl rock and roll to ABIR's soulful jams. And once Betty Who took the stage in the early evening, everyone was ready to keep dancing the night away — which is exactly what they did, thanks to the Australian singer's catchy hits.

Got Inspired To Make Change With Stacey Abrams

The voting rights activist and former Georgia gubernatorial candidate took to the stage before Lizzo's headlining performance to inspire everyone in the audience to break the rules. "Break them because they need to broken, because that's the only way change can happen," she said. "The only way for us to save our futures is to write the rules ourselves."

The Rule Breakers festival truly went out with a bang, courtesy of Lizzo's joyful, fun, and incredibly dance-filled performance. In addition to performing hits like "Tempo" and "Truth Hurts," the singer and rapper showed exactly why she's the ultimate rule breaker by using her time on stage to encourage fans to make their relationship with themselves their number one priority. She took her audience to church with chants of "Hallelujah" between songs, and of course, inspired everyone to run for office.

Bustle's second annual Rule Breakers festival may have just ended, but if you aren't ready to stop breaking all the rules, don't worry; Bustle's Rule Breakers editorial initiative is always there, to inspire, empower, and make you feel, well, good as hell.

More like this
The 'Love, Lizzo' Harry Styles Scene Is Just 1 Moment That Made Fans Feel Seen
By Brad Witter
Shania Twain Replaced Brad Pitt’s Name In “That Don’t Impress Me Much” At The PCAs
By Jake Viswanath
Singer Jenni Rivera Received Death Threats Prior To Her Tragic 2012 Plane Crash
By Brad Witter
A Taylor Swift Documentary About The Ticketmaster Fiasco Is Streaming Now
By Grace Wehniainen
Get Even More From Bustle — Sign Up For The Newsletter