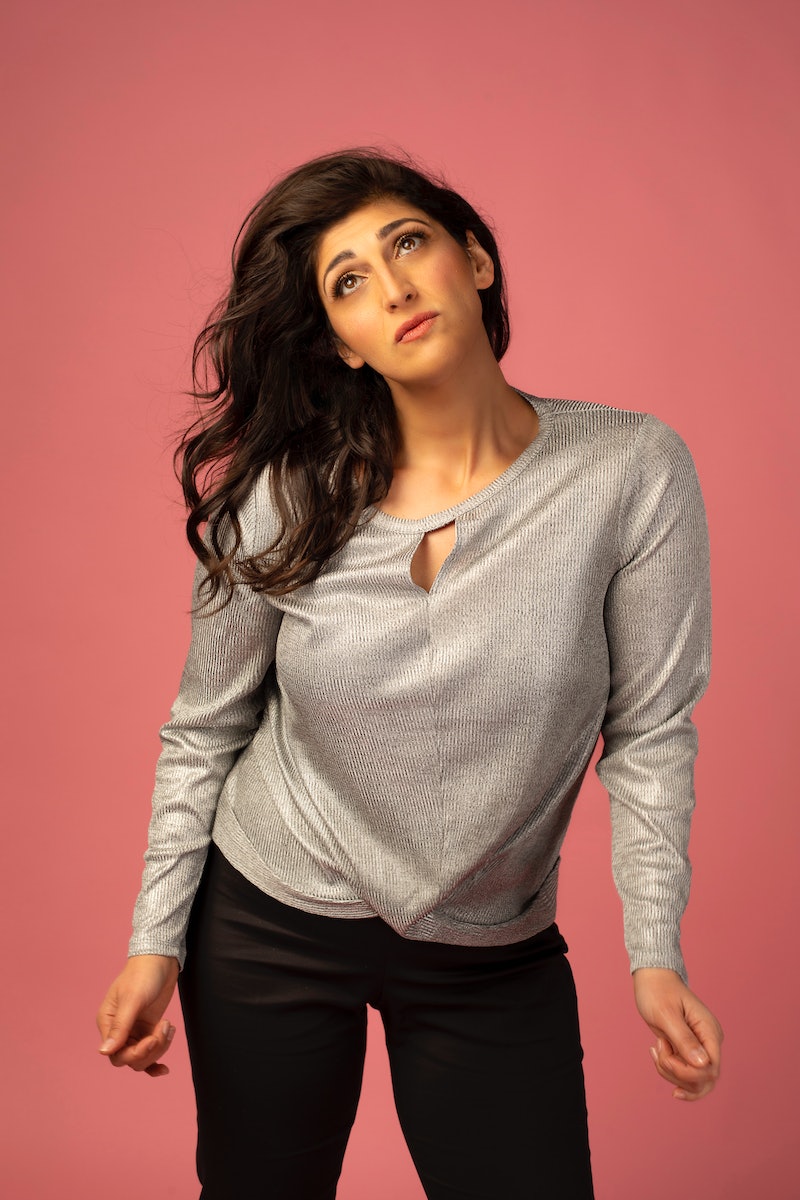 Discovering the power of comedy wasn't quite a laughing matter for comedian Zahra Noorbakhsh. Growing up near San Francisco following the 1979 Iran hostage crisis, the first generation Iranian-American had become accustomed to people "threatening to ram their cars into" her family or "flipping the bird," she tells Bustle. During one trip to the grocery store when she was five, an older man even approached her mother — who wore a hijab at the time — and began demanding to know why her "people" hated America.

"I ran in between them with a box of Lucky Charms and was like 'Ah! Lucky Charms! Give me Lucky Charms!'" Noorbakhsh recalls. "I started making a big scene and sort of created a distraction, trying to be funny and silly, liked I'd seen kids do on TV. And the guy started laughing and he said, 'These kids are all the same, aren't they? Just sugar, sugar, sugar.' And then he left smiling. And I was like, 'What happened?' That's comedy!"

Experiences like that taught Noorbakhsh, now the co-host of the popular #GoodMuslimBadMuslim podcast, just how much impact comedy can have. So when she turns on the news to see fellow comedian Louis C.K. admitting to sexual misconduct or Kevin Hart apologizing for "insensitive words" against the LGBTQA+ community, it truly feels like an abuse of that power to her. And she's had enough.

"I'm really tired of hearing about apologies," she explains. "I want to hear an acknowledgment of their past behavior, but I also want us to talk about actions moving forward. I think what everyone is calling for is for people to be better people: Don't be homophobic, don't be a proponent of rape culture, do those things that make you a better human. I want to hear us as a populace focused on action, as opposed to apology."

One of the biggest problems in the comedy world, Noorbakhsh says, is that "98 percent of comedy is developed at a bar or nightclub," which she believes fosters a misogynistic culture in which "the underdog is the guy at the bar trying to score." Earlier in her career, that atmosphere led her to frequently try to out-wit her male peers, and, eventually, to consider quitting comedy completely.

"As a women in that scene, I felt like I was always responding to either how f*ckable or unf*ckable I was," Noorbakhsh says. "I didn't have a language to kind of say, 'Oh, I'm being tasked with identifying myself with the male gaze at a bar and then proving that I could be funnier than them by being more crass.' I had no interest in doing that, and, at the time, how that translated for me is that I just wasn't good."

Aside from combating gender bias, Noorbakhsh also had the extra hurdle of being a woman of color in a very white industry. "We see white, male comedians 'change' the field of comedy, so to speak, all the time," she says. When people of color perform, she says, they "always get relegated to this sort of margin of simply doing something different with comedy, as opposed to changing the field of comedy."

Witnessing this over and over, especially in her earlier years, affected Noorbakhsh deeply. "That really would sit with me, and I would start to notice how so many people of color would have to leave the comedy scene to establish a context outside of stereotypes and tell a story that had an arc," she says.

Her saving grace came in the form of organizations like the Pop Culture Collaborative and comedians like W. Kamau Bell, who directed her one-woman show, All Atheists Are Muslim: A Romantic Comedy. There was also her now-co-host, Tanzila "Taz" Ahmed, with whom she launched the #GoodMuslimBadMuslim podcast in 2015 after trading jokes on Twitter for about a year. Explains Noorbakhsh, "we weren't hearing our stories out there, and it really was as simple as us not hearing these voices, and deciding to be those voices."

The duo even got to record a May 2016 episode of their podcast at the White House when Amed received a Champion of Change in Art and Storytelling award — an experience Noorbakhsh still finds unreal. "We were next door to Vice President Biden's office, and the room that we recorded in was where they had made the call to drop the Hiroshima bomb," she recalls. "And there were just these like portraits of very important old, white men everywhere. It was just such a surreal and extraordinary experience. In Michelle Obama's book, Becoming, she says how important she thought it was that they make the White House accessible to people who wouldn't normally have access at that level of D.C. And I felt like we were kind of an example of that."

Nearly three years later, Noorbakhsh, whose next comedy special On Behalf of All Muslims films in June, continues to make her mark on the comedy world. Her views on comedy's role in the current "volatile political climate," however, have shifted over time. "I think one of the challenges that's facing a lot of comedians and fans right now is the expectation that comedy is always mean to alleviate tension," she explains. "But I don't think that's comedy's job. I think comedy's job is to illuminate tension."

"As comedians," she continues, "we have to show what comedy is actually for and use our platforms for good. Now, everyone is being asked to sort of choose sides. And I think we do need to." Hopefully the Louis C.K.s and Kevin Harts of the world will take note.

Editor's Note: The original headline of this article has been changed.