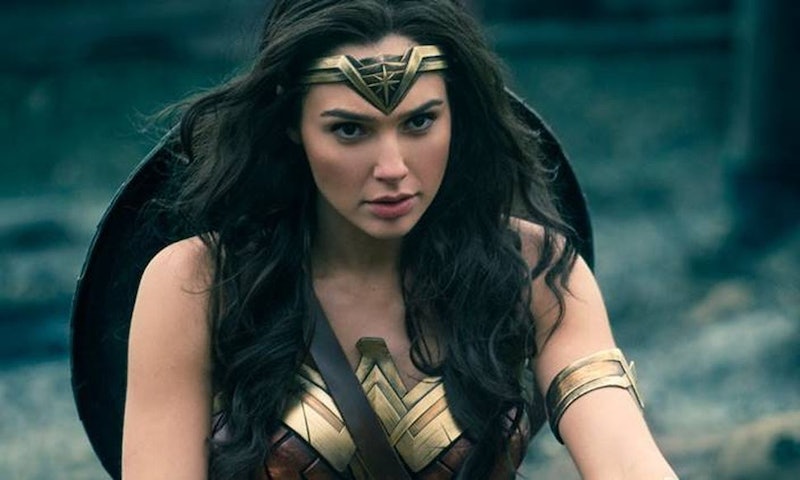 Despite the fact that the film is literally only three and a half weeks into production Wonder Woman 1984 footage was shown at San Diego Comic-Con to uproarious applause. Director Patty Jenkins was joined on stage by Chris Pine (even though Steve Trevor died in the last movie, but we're not going to worry about that) and Gal Gadot, and made it very clear that the footage was extremely rough, just a morsel of action that she wanted to share since that's what you do at Comic-Con. Of course, that doesn't mean we can't obsess over it and every other little bit of intel that they gave us.

The footage, which may not even end up in the final cut, returns to a familiar location for those fans following every little tidbit of Wonder Woman intel. We finally know what Diana Prince is doing in that wonderfully tacky ‘80s mall. The rough cut presented at Comic-Con gives a peek at Wonder Woman taking on the ‘80s, saving a little girl who seems genuinely thrilled to meet her (see: the embodiment of how literally every woman in the audience felt watching that footage). It seems to be the same mall from the Steve Trevor photo, which certainly raises some questions, none of which were answered by the footage or the cast. Obviously.

Panel host Aisha Tyler did us all a solid though and at least attempted to ask the obvious question: Hey, Chris. How come you're here? Aren't you supposed to be dead? Well, he didn't have much of an answer but let's read into it anyway. "I’m actually not really here right now," he said. Luckily, Jenkins did offer a teensy bit more: "It’s something I’m super excited for everyone to see … it’s a super important part of our movie."

There was also quite a bit of talk during the presentation about reinvention and how the new Wonder Woman film isn't "more" of the original, but it's own film, which may explain things.

“The way we all look at it is it’s not a sequel, it’s a new chapter," says Gadot. "It’s a whole new movie." Jenkins added that she never wants to “do more of anything for the wrong reason.”

“I want to make great movies in my lifetime and suddenly I found myself saying I have these characters in this world that I love and we can make a whole new movie," she said. "It’s not more of anything even though it’s evocative of all those things we did in the first one."

While on one hand, she probably means that in a bit more of a conceptual way, that the film has no plans to rehash the originals tricks and twists, but considering that we've got a dead man walking around in a tracksuit, I'm taking just about everything as a hint.

Of course, the only thing we know for sure is that Jenkins and Gadot are extremely passionate about delivering yet another fantastic film to the fans that loved the first one. “The bar is high, but our aspirations are even higher," said Gadot. And that's just about the best thing a fan can hear.