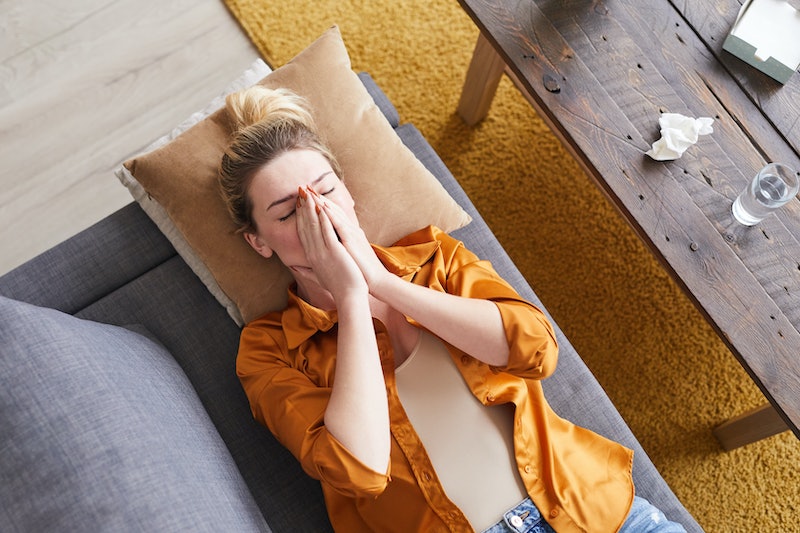 It’s only February, but so much happened in the first month of 2020 that people say they’ve had enough bad news for the entire year. From worries of a third World War, to the international coronavirus outbreak, to Megxit, and Kobe Bryant’s unexpected death, January brought a lot of stressful news to people’s feeds. Those memes about feeling already exhausted by 2020 are describing something real: compassion fatigue.

“The last couple of weeks were really terrible,” psychotherapist Dr. Susanne Babbel tells Bustle. “People who I've not seen for a long time would call and say, ‘I need to check in.’”

Compassion fatigue is often defined as a general state of physical and mental exhaustion caused by continued exposure to other people’s trauma. It’s often experienced by caregivers, aid workers, doctors and others who deal with trauma on a daily basis. Symptoms include feelings of hopelessness, insomnia, and nightmares brought on by the stress associated with hearing or seeing distressing situations over and over.

Pain increases that sense of time being stuck.

Babbel says that over the 20 years she’s been practicing, she’s noticed more clients describing signs of compassion fatigue. Every so often, there’s a particularly bad year. As we hear about humanitarian crises, climate change, and diminishing global security 24/7 — where 20 years ago, reading the news was a limited part of someone’s day — people across backgrounds and ages can start feeling compassion fatigue, too. “People are more aware [of bad news] now,” Babbel says.

Babbel began researching compassion fatigue after she felt it herself while training as a therapist. Her research made her realize how almost anyone can experience compassion fatigue. “It can really be anywhere and in anyone,” Babbel says, “When people would talk about loss ... or traumatic situations for other people, they wouldn’t just feel empathy, but would internalize their stress and end up with similar symptoms.”

Babbel says those memes asking if “2020 has any other months or is it just January?” are describing a particular effect of this condition: feeling like time is moving at glacial pace is linked to both direct and indirect trauma or stress. “If we stay with the worry and the hopelessness and the helplessness, it can feel like the time doesn't stop,” Babbel says. “Pain increases that sense of time being stuck.”

To battle compassion fatigue, Babbel trains her clients to do mindfulness exercises. Even a few minutes of meditation or stillness each day can help combat symptoms. “It can help people to be aware of what they’re actually feeling physically and emotionally,” she says, “then take the intensity out of it and feel calm again.”

Beyond that, Babbel recommends taking breaks from consuming stressful news. She also recommends talking through traumatic stories with friends. Isolating the moment between a distressing stimulus and a reaction to helps people become more aware of what’s triggering them, she says. “In that moment... we can connect to our emotions,” she says. “Be your own observer.”

More like this
6 Abortion Advocates To Follow On TikTok
By Sara Youngblood Gregory
The UK Abortion Laws In 2022, Explained
By Sophie McEvoy
How To Protect Your Digital Privacy If You Need An Abortion Post-Roe
By Kaitlyn Wylde
How To Decide Between Using White, Pink, & Brown Noise
By Carolyn Steber
Get Even More From Bustle — Sign Up For The Newsletter