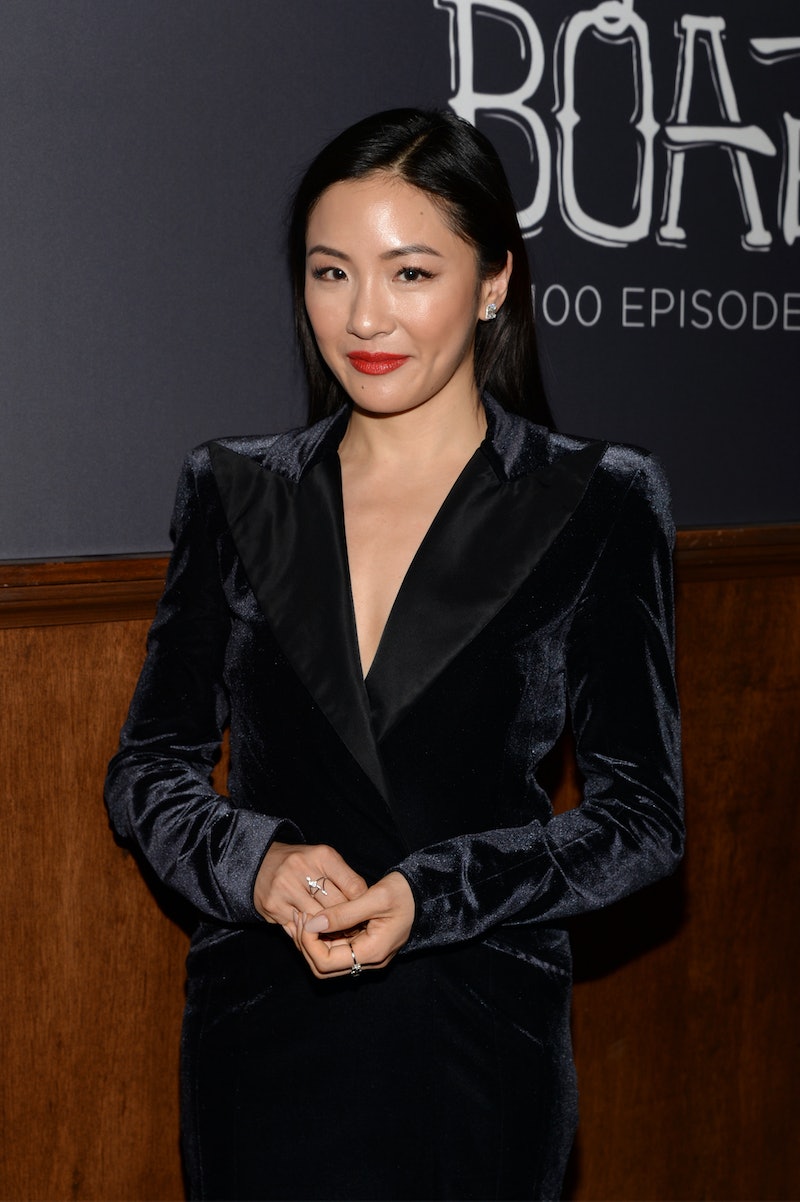 In a new interview with the Los Angeles Times, Constance Wu clarified her Fresh Off the Boat tweets that made headlines earlier this year. Shortly after her ABC sitcom was picked up for a sixth season in May, the actor tweeted in a since deleted tweet, "So upset right now that I'm literally crying. Ugh. F*ck." Some of her fans were dismayed by her response to her hit show continuing, and even though she quickly clarified that she was simply upset that she would have to pass on a project she was hoping to do, Wu found herself being labeled a diva. Now the Hustlers actor is opening up about what she learned from the backlash, and why she hopes more people in the industry will own up to their imperfections.

Wu is quick to own her Twitter gaffe in her interview with the LA Times. "I had this moment of heat where I got upset because I had to give up a job I had been looking forward to and had been chasing for a while," she said. "It was moving to me how many people from the show reached out to me, and even on set ... to say, 'Just so you know, we love you and we know who you are, and you didn't deserve any of that stuff.' Because they also know that I'm an actress — I can be dramatic. I mean, that's our toolkit, right? I'm dramatic. I'm emotional. But they also know that that doesn't represent me because they have a hundred episodes of behavior that proves otherwise."

The moment also made Wu realize just how closely people were following her social media presence, and she shared with the publication that she's still grappling with what it means to be a public figure.

"I like that people are expressing their feelings about it, because it improved my awareness of what it means to be a ... public figure," Wu said of the backlash. "I've had a back and forth about it. It's the line between being a role model, but also authenticity. I think a lot of why people are lonely in this world is because they go through these Instagram feeds and everybody’s life is perfect. Nobody trips up. And sometimes I think, might it be good to see our heroes mess up a little bit and not always be perfect?"

Ultimately, Wu's reaction was a deeply human one. Having to pass on a dream job would upset anyone, but because she's part of a popular sitcom, her tweets received a different level of scrutiny. Shortly after she tweeted about her disappointment, the Crazy Rich Asians actor shared a lengthy apology to her fans via Twitter. She wrote in part, "People 'assumed' that that meant I don't love and enjoy FOTB. But I do love and enjoy it. I hope you believe me. People can hold conflicting feelings in their hearts — that conflict is part of being human."

With Hustlers coming to theaters on Sept. 13, Wu is set to further solidify her status as one of Hollywood's rising stars. And while she's grateful for all of her roles, she also hopes that the film and TV industry can reach a point where her career as an Asian-American woman isn't seen as historic.

"I am grateful for my entire career," she told LA Times. "But the fact that my career has been historic shouldn't necessarily be a call [to say to] me, 'You should be so lucky' — it should be a call to pay attention to the fact that this kind of thing shouldn't have been historic. Me getting to play a fully human experience as an Asian American, that shouldn’t be historic. But it is. Let's talk about the system, not whether or not I deserve to be in it and how I need to feel about it."

Despite this, the Fresh Off the Boat star isn't eager to repeat her Twitter mistake, but if she does, she's not going to beat herself up about it. After all, everyone has emotional reactions sometimes, and yes, that includes your favorite actors.