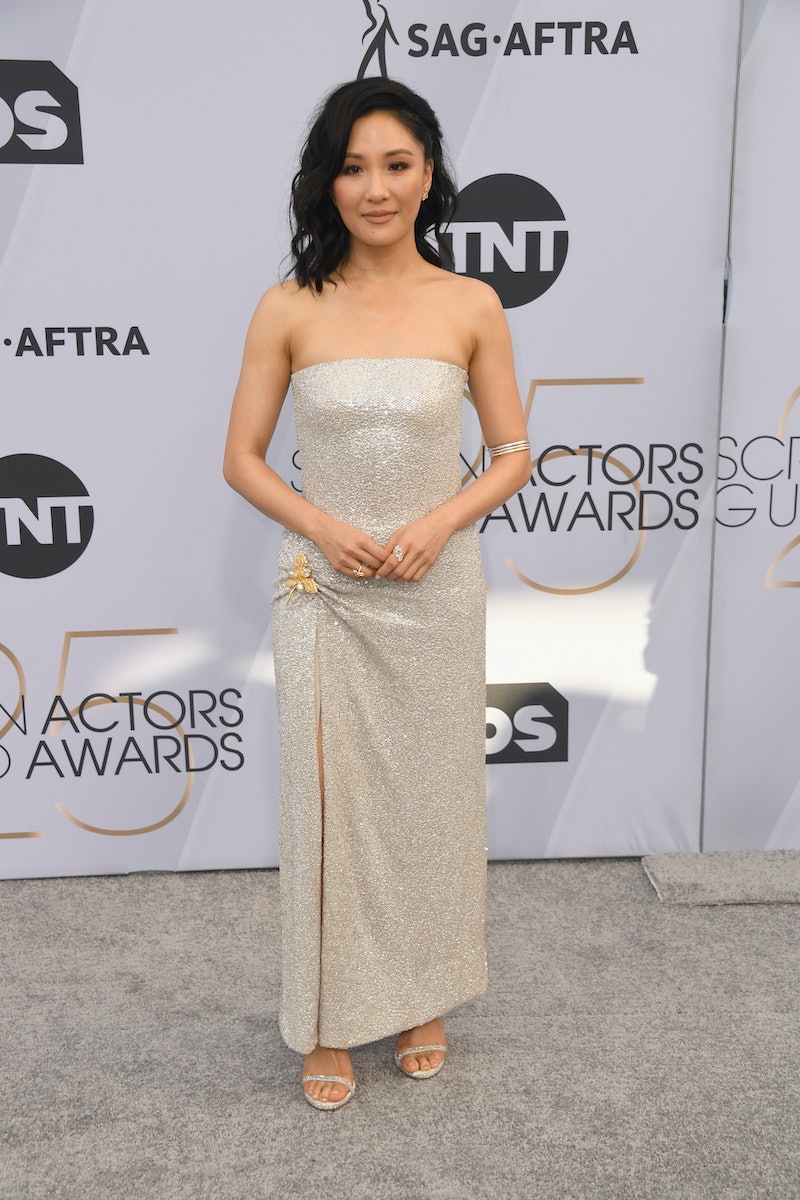 Crazy Rich Asians and Fresh Off the Boat star Constance Wu has wowed her fans, fashion watchers, and beyond during the 2019 awards season with her ensembles. Constance Wu's 2019 SAG Award dress was another instance of the actor absolutely "crushing it" on the red carpet. She has knocked it outta the park many times with her ensembles. That's to say nothing of her outstanding work in the film and series, respectively.

She is going to remain "one to watch" long after the awards season wraps. She's been that stunning from show to show, carpet to carpet, and she has further established herself as an incredibly stylish celeb.

The actor wore a strapless, champagne-colored column dress that was cinched on one side. It was simply sparkly — like a glass of bubbly.

She added a matching, above-the-elbow arm cuff and wore it on the opposite side of the cinching. That was a subtle and gorgeous touch.

Her hair was fashioned into loose, beachy waves swept to the side and showing off her earrings. It was effortless, as though she walked off the beach, added some product, and got ready. Wu, who debuted wispy bangs at the 2019 Critics' Choice Awards, went with a totally different coif at the SAGs.

Her makeup was elegant and lovely. She went with a soft, peachy lip and highlighted cheeks. I was sort of expecting Wu to wear something champagne-hued or neutral, since that's the fashion route she has been going — and owning — as of late. But with her, neutral color palettes are not boring. Not. Even. Close. She adds such sexy touches, like her lingerie-inspired, Verga Wang gown at the Golden Globes. At the SAGs, the construction was simple, with a slit. But the sparkle of the fabric added that extra "oomph."

Wu wore this sheer tulle dress with an orange sash and corseted bodice to the 2019 Golden Globes. She was easily one of the best dressed stars of the ceremony. The contrast of the fitted top and the flowing bottom was beautiful. Can we talk about the messy and side-parted bun for a moment? It was also a lovely stylistic variation from her elegant gown.

As mentioned, Wu continued to rock the neutral color palette at the 2019 Critics' Choice Awards. She opted for a sparkling, champagne-colored Rodarte dress with lots of sequins that mimicked a starry sky, a deeply-dipping V, and those delicate, leaf-like shoulders. It was chic and sexy in the same breath. She wore her hair down and showed off the kind of bangs that inspire you to book an appointment with your stylist to copy them. While the bangs were MIA at the SAGs, you can still marvel at her look a week prior.

Her SAGs ensemble was another red carpet win during the 2019 awards season. It's going to be fun to watch her for the rest of the year. She never, ever disappoints with her fashion choices. Her color palette has been the same but the style, shape, and silhouette of each dress was unique.