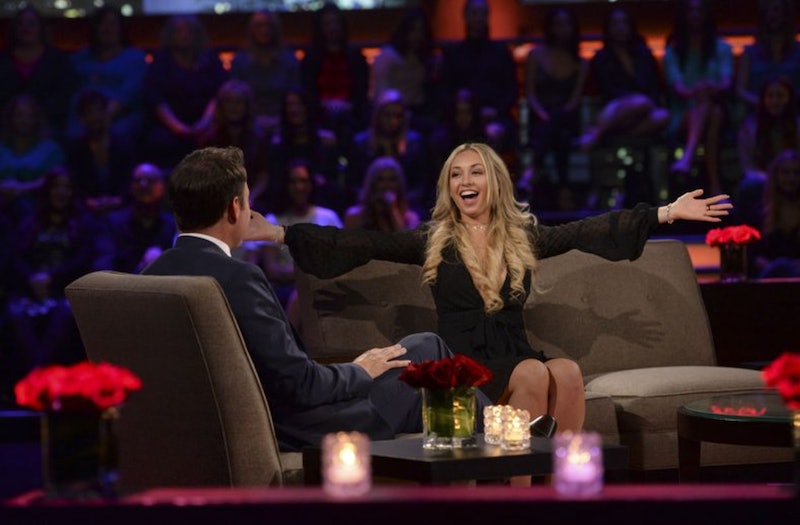 Holy corn shucks, it sounds like Corn will be taking her napping talents to Paradise. On Thursday, E! News confirmed that The Bachelor contestant Corinne Olympios will be on Bachelor in Paradise. Well, I’ll be Clare Crawley’s talking raccoon! Bustle reached out to Olympios’ reps, who declined to comment on the subject.

From the moment I watched Olympios present Nick Viall with a sack of tokens on night one of The Bachelor Season 21, I knew she was a perfect candidate for Paradise. However, in recent months, she’s played coy about whether or not she’ll appear on the Bachelor spinoff; back in March, the sleep-loving reality TV personality told E! News that she was in a new relationship, all but squashing my dreams of seeing her attempt to find love on BiP. But thankfully, our manure-hating heroine may be down to YOPO after all.

If Corn is indeed part of the cast, what can and should fans expect? A source claimed to E! News that Olympios has other Paradise intentions:

"She's not interested in dating anyone in Paradise. She's going along for the ride, to have fun, and support her girls. She's going to be the best wing woman. But, you never know what will happen."

I hope Corn sticks around for the whole season. It would be a real summer bummer if she showed up on, like, Episode 4 only to be eliminated at the next rose ceremony. If something like that happens, I will cry into my bowl of cheese pasta.

I was stoked for Paradise Season 4 before this Corn report, but now I’m beside myself. I bet she won’t let anyone re-interrupt her. I bet she’ll bring a bunch of props and slowly roll them out as the season goes along. Ingredients for cheese pasta, a corn cob costume, a case of olive jars, and so on. And of course, I bet she’ll nap on so many hammocks. And on so many pool rafts. And I bet she’ll pull up a beach lounger next to that bird cage where Chris Harrison greets everyone and catch some Zs.

Aug. 8, can you please pack your suitcase, drag it across the shore, and get here already?

Editor's Note: This post has been updated from the original version to mention that Olympios' reps declined to comment.