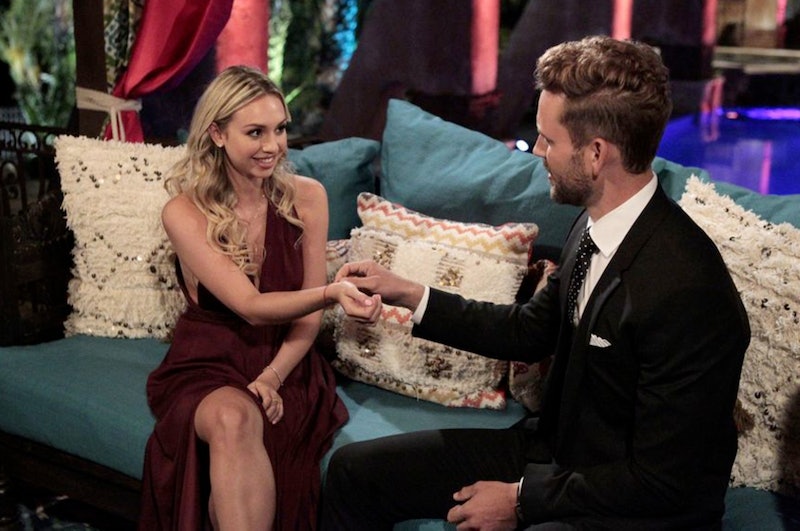 There have only been two episodes of Nick Viall's season of The Bachelor and things are already so chaotic. And, most of this drama comes from contestant Corinne — her actions, Nick's response to her actions, and the other women's reaction to her actions. Bachelor fans know that every season one contestant is painted as the "villain," and Corinne has been portrayed as one from the get-go this season. She has definitely drawn the ire of the other ladies in the house, but not everything she says or does is completely out there. Take Corinne's rambling speech about her sole purpose for being there. On this week's installment of Bustle's Bachelor podcast, the hosts argued that Corinne kind of went on a strange tangent — but some of it was pretty true.

And, as a bonus, this episode of Will You Accept This Podcast? which you can listen to here, features an old interview with Nick Viall from the time he appeared on Bustle's sex & relationships podcast and dished all about love. Speaking of sex and relationships, back to Corinne. Bustle Senior Entertainment Editor Kelsea Stahler and Romper Senior News & Entertainment Editor Allison Piwowarski had a lot of feelings about Corinne's outburst, which they shared in this week's podcast. Allison said that it appeared to be a case where Corinne began the speech and just couldn't get out of it, so she had to keep going. I think we have all been there at one point or another, where you begin to talk and just kind of hoped to find a point along the way. Both Allison and Kelsea also think alcohol played a huge role in the ordeal as well, considering the ladies appeared to be drinking pretty much the entire day.

But, as Kelsea noted, Corinne was just dropping truth bombs — and you can't hate a contestant for telling it like it is. Of course things are going to get weird when you are all competing for one man. The way the speech was delivered could have been more clear and respectful, but, honestly, I don't think she was wrong in being upfront with everybody about her intentions. She just didn't have to be so over-the-top about it.

She went on a long, rambling diatribe about how the women should all just look out for themselves and stop trying to make friends with each other. Like Kelsea and Allison stated in the podcast, it was pretty awkward and seemingly alcohol-fueled, but she certainly was being upfront about why she was on the show. She was there for Nick, and Nick alone.

I've always found it pretty strange that the women place such an emphasis on being fair to each other, because you really aren't there to make friends. If anyone is going to appreciate that attitude it's Nick. He frequently paid more attention to the Bachelorette on his seasons than his fellow suitors, because he was there to woo Andi and Kaitlyn — not convince the other men to be his friends.

Now, could she have said it better? Yes. The importance of the point she was making got kind of lost in her slurred words and pointed meanness, which is unfortunate. Still, Corinne is sure to be fun to watch this season, and to listen to if she keeps it real. And, make sure you check out what the ladies from Bustle's Bachelor podcast have to say about it each week to stay on top of all the drama.