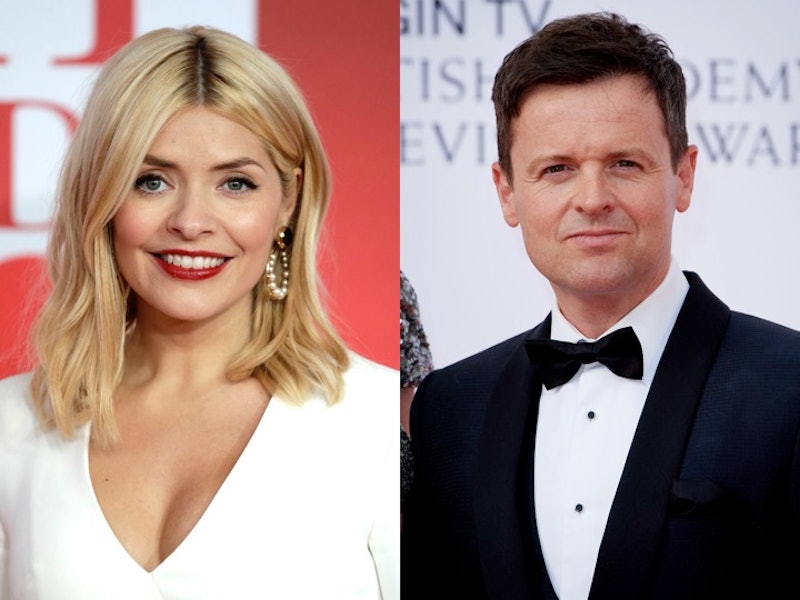 It's approaching I'm a Celebrity...Get Me Out Of Here! season, but this year's series is already looking a little different. Recently, Ant McPartlin announced that he won't be co-hosting the show this year, inviting speculation as to whether Declan Donnelly will find a stand-in for Ant or opt to go it alone. Now, rumours are circulating that This Morning's Holly Willoughby could co-host I'm a Celebrity with Dec, with newspapers reporting that Willoughby's the firm favourite of ITV to fill the role.

According to the Mirror, Willoughby is "highly coveted by ITV bosses", who, according to an unnamed source, "could make an approach for her to co-host alongside Declan Donnelly." However, a source at ITV told the paper that nothing's in writing yet — in fact, Dec hasn't even taken part in any "formal discussions" about a potential stand-in for Ant, though these discussions are "set to happen next month." An insider claimed, nevertheless, that Willoughby would be a perfect fit, telling the Mirror, "Ant and Dec both love her and I am sure they'd be thrilled if she got the job. They share a management company [that's the James Grant Group] so Holly already knows what being in the Jungle for weeks entails." I've reached out to Holly's representative for comment.

Ant confirmed that he won't be hosting this year's I'm a Celebrity in a joint statement on Ant and Dec's official website, attributing his decision to his ongoing treatment following his arrest for drink driving in March 2018, as the BBC reported. He said, "My recovery is going very well and for that to continue having spoken to Dec and ITV, I have made the decision to take the rest of the year off. I’d like to thank both Dec and ITV for their continued support and I look forward to getting back to work in the new year."

The statement also revealed that Ant & Dec's Saturday Night Takeaway won't return in 2019, owing to an advance production schedule that would require Ant to begin working on the show now. "Neither Ant & Dec nor ITV wanted to compromise the quality of the show and therefore felt it was better to rest the series next year. They will instead bring the show back in 2020, bigger and better than ever," the statement read.

Dec added, "Whilst I am obviously sad at the thought of being without my best friend in Australia this year, I am proud of the work Ant has been doing privately and I am fully supportive of his decision. I’m looking forward to us both being reunited on screen in 2019."

So how well suited is Holly Willoughby to a hosting gig in the jungle? Well, as the Mirror observes, she's already good friends with Ant and Dec, meaning there'll be no lack of chemistry should she host alongside Dec. In an interview with the Guardian earlier this year, she explained her reluctance to discuss Ant's arrest for drink-driving on This Morning, saying, "Everybody knows that Ant is a very good friend of mine and I’ve known him for a very long time." She added, "Out of respect for him, I love him to bits, it’s not something that I find very easy to talk about. Because it’s a friend. His is not my story to tell." Sounds likely that if Willoughby did stand in for Ant on this series of I'm a Celebrity, she'd approach it with a great deal of sensitivity.

Plus, as a co-host of This Morning alongside Phillip Schofield, she's used to a somewhat gruelling daily schedule. But therein lies a potential snag to Willoughby's I'm a Celebrity stint. She'd have to abandon her duties on This Morning for three weeks, leaving Schofe all alone — or in search of a new co-host of his own.

I've reached out to ITV for confirmation of the rumours, but haven't received a reply as of yet. There's still about three months to go before the new series of I'm a Celebrity begins (Radio Times predicts it will launch on November 18th), so it's likely there'll be twists and turns ahead on the matter of who, contestants and co-hosts alike, will be going into the jungle.