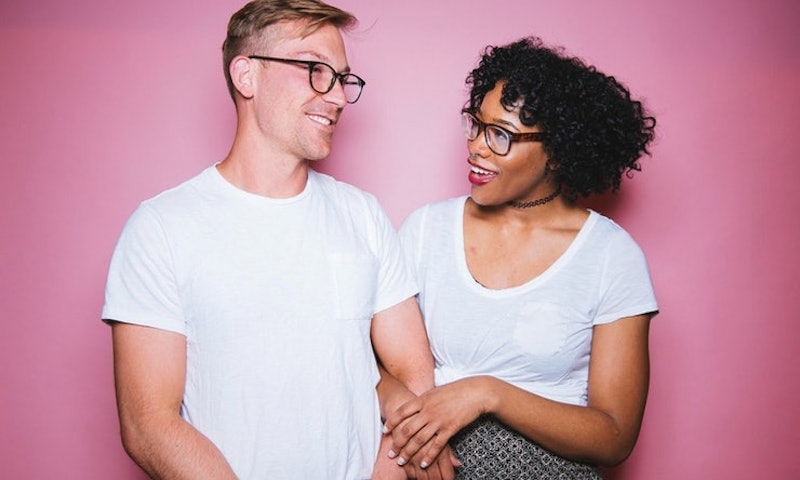 When it comes to money and relationships, there are so many different issues that can arise, from one partner spending too much on a couch to another not being honest about their credit card debt. But it's important to understand how money — including how much you both make — can affect your relationship. That way, you can open up a conversation and deal with any potential problems before they even start.

Recently a new study published in Demography found that couples who earned similar amounts were more likely to stay together in the long haul. Patrick Ishizuka, a postdoctoral fellow at Cornell University's Cornell Population Center, looked at how finances affect marriage — both in terms of how likely we were to get married and how likely we were to stay married. He looked at theory called "the marriage bar", which is the idea that as couples approach a financial stability level that allows them to achieve things associated with marriage — like owning a house — they are more likely to marry. His research showed that was the case and argued that marriage is becoming a privilege of a certain wealth level. No surprise there, as many of us probably know people putting off marriage until they feel like they can afford it.

"In theory, it doesn’t cost any more to live as a married couple than it does to cohabit," Ishizuka tells Bustle. "But many couples want to have achieved middle-class economic standards before marrying, such as having stable jobs and a steady income, owning a home and a car, and having enough savings to throw a big wedding. There seems to be an earnings threshold that’s important for couples to meet before they marry. As couples’ earnings get closer to what is typical of married couples in their state, their odds of marrying increase. But after couples have met that standard, further increases in earnings don’t seem to matter. And having wealth, such as owning a home and having financial assets, also increases couples’ odds of marriage. This is consistent with the theory that middle-class economic standards influence couples’ willingness to get married."

Because couples often fight about money, it's easy to assume that having more money means less fighting, but the research actually found that the connection was slightly more complicated than that. Ishizuka found that couples who earned similar amounts were more likely to stay together.

It makes sense that earning the same amount would help a relationship. But if both couples earn the same, those disagreements can be approached from a level playing field, which can be more productive than if one party feels guilty or resentful about an income inequality.

The research also found that couples who cohabit before getting married have more egalitarian views on money than those who don't. "Probably the main reason why couples who live together before marriage have more egalitarian views is because people who cohabit are different from those who don’t," Ishizuka says. "Cohabitation used to be uncommon, but today most couples who marry have lived together first. People who live together before marriage tend to have less traditional attitudes about men’s and women’s work and family roles than people who marry directly from being single. We don’t have evidence that the experience of cohabitation makes couples more egalitarian, but cohabitation does seem to have less rigid norms around male breadwinning than marriage."

What's The Best Way To Deal With Money Issues?

Whether you earn the same amount as your partner or not, money issues can arise at any time — so how do you stop it? Whatever it is, talking about money — and normalizing talking about money — is crucial. “Talking about money is immensely important,” Priya Malani, co-founder of Stash Wealth tells Bustle. “Studies show that spending habits and money decisions are a very clear indicator of your values and priorities in life. So if you and your partner have vastly different spending habits and you don't have a system in place to manage the difference, it's likely there will be conflicts in other areas of life as well.”

If you start talking about money early and can explain how money issues make you feel — whether it's vulnerable, defensive, anxious, or anything else — it's easier to get on the same page as your partner. "The worst thing you can do for your relationship is withhold how you’re feeling, especially about money," Bouchard says. "The problem is, we don’t trust ourselves in how to have those conversations in a way that brings us closer, so we tend to avoid them." Talk it through, come up with a budget and spending system that you both feel comfortable with, and try to move forward from there.

Talking about money just doesn't come naturally for some people, but it's important to get used to discussing it with your partner. In a relationship, money issues are bound to come up but, if you talk about it and approach the money conversation from an egalitarian point of view, you should be able to come up with a system you're both comfortable with.

More like this
Melony & Gia Prove That Couples Who Grow Together, Stay Together
By Jessica Morgan
Are Gemini & Leo Compatible In A Relationship?
By Kristine Fellizar
My BF Wants To Stay Friends With His Ex Primary Partner. What Do I Do?
By Sophia Benoit
What Are Swingers? Everything You Need To Know
By Lexi Inks
Get Even More From Bustle — Sign Up For The Newsletter