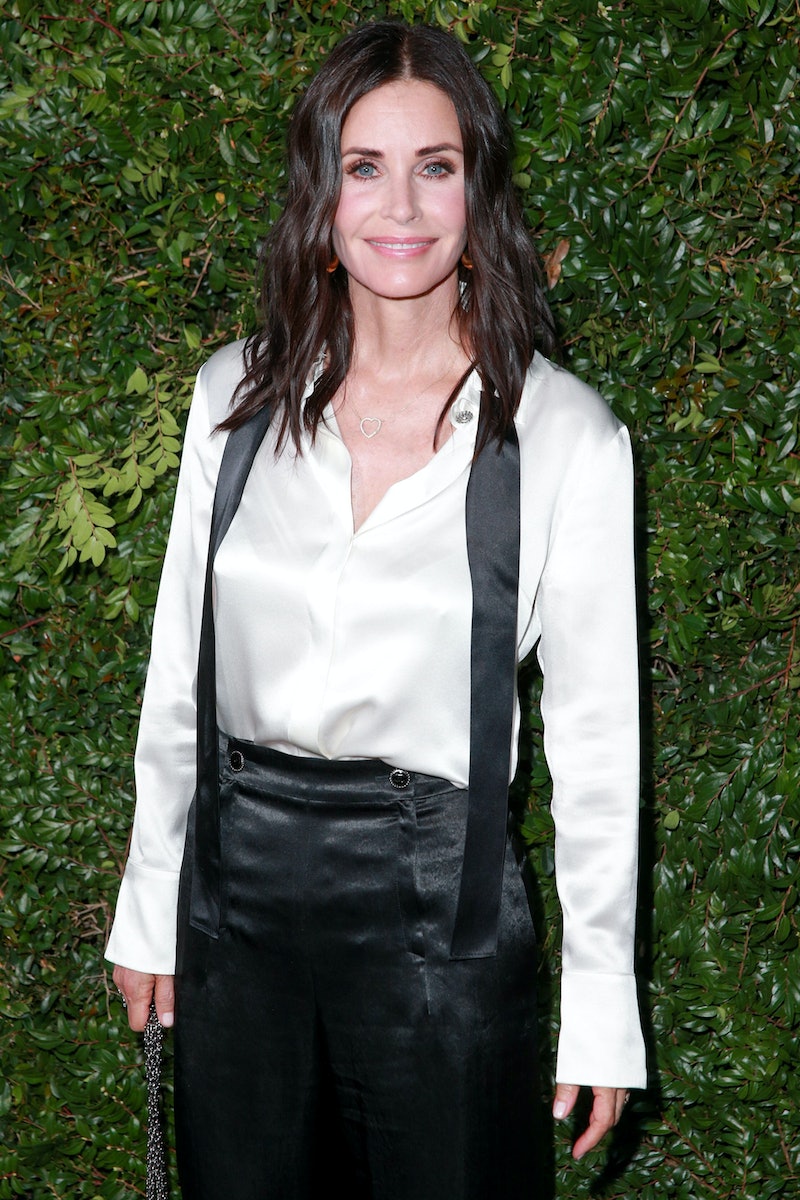 Although she's only been on Instagram for less than two months, Courteney Cox has been totally killing the social media game when it comes to sharing throwback photos of her time in the entertainment industry. Most recently, Cox visited the Friends apartment building, giving fans a major moment of nostalgia when she posted a video of herself visiting the outdoor location used as the exterior of her character Monica Geller's New York City apartment.

In the video, which was posted on Wednesday, March 30, Cox joked, “Goodnight guys, I’m going home” as she walked towards the building while waving at the camera. The Friends transitioning theme music played in the background as the camera dramatically panned up to the top of the building as if to point straight the pad that Monica once hung out in with her pals, Rachel, Phoebe, Chandler, Joey, and Ross during their time on air. Lending further sentiment to the post, Cox shared a caption that mirrored the widely-recognizable style of Friends' episode titles, hilariously referring to her Instagram clip as "The One Where My Rent Went Up $12,000."

“#Missthosedays", Cox wrote in a hashtag, while also tagging the name of producer, writer, and close friend Molly McNearney (Jimmy Kimmel's wife), who presumably served as cinematographer of Cox's trip down memory lane.

Since joining the 'gram back in January of this year, Cox has shared many nostalgic moments with her followers, which now stand at 1.4 million and counting. In her first post, which was orchestrated on The Ellen DeGeneres Show, host Ellen DeGeneres recreated the layout of the Central Perk coffee house set and gave fans a Friends reunion moment that many won't soon forget.

Leading Cox into the surprise gathering, DeGeneres revealed that they were sitting on the actual couch that was used during the filming of Friends. Following some small talk, DeGeneres casually told Cox, "I wish Lisa Kudrow was here because that would be fun." Kudrow, who has remained close with Cox over the years, then appeared on stage and the trio posed for a photo that would become Cox's official introduction to the photo sharing social media platform.

Excited by Kudrow's appearance, Cox joked, "This is my first Instagram post? Oh my God, It's all downhill after this." Cox shared the inaugural Instagram photo on January 29, along with the caption, "Hello Instagram! I’m here with a little help from my friends." Later that day, she also posted a Boomerang of herself and Kudrow walking into the entrance of the studio where DeGeneres' show is filmed, topping it off with, "Love this girl ❤️"

On March 2, Cox again channeled one of Friends' most iconic moments. In a video, which showcased three men to moving a table down a hall in her house, Cox shouted, “Pivot!,” creating a scene similar to the 1999 episode in which her on-screen brother Ross (David Schwimmer) did when trying to move a sofa into his apartment. “Just another Friday night #pivot,” Cox captioned her Instagram post.

It seems that these nostalgic moments are something that fans will have to hold close to their hearts, since its likely that a Friends reboot will never happen. Despite being supported by some cast members, the notion of a revival has long been shut down by both NBC execs and even the show's creator.

Although there won't be a reboot, having Courteney Cox share important nostalgic moments like these certainly helps keep the spirit of Friends alive.