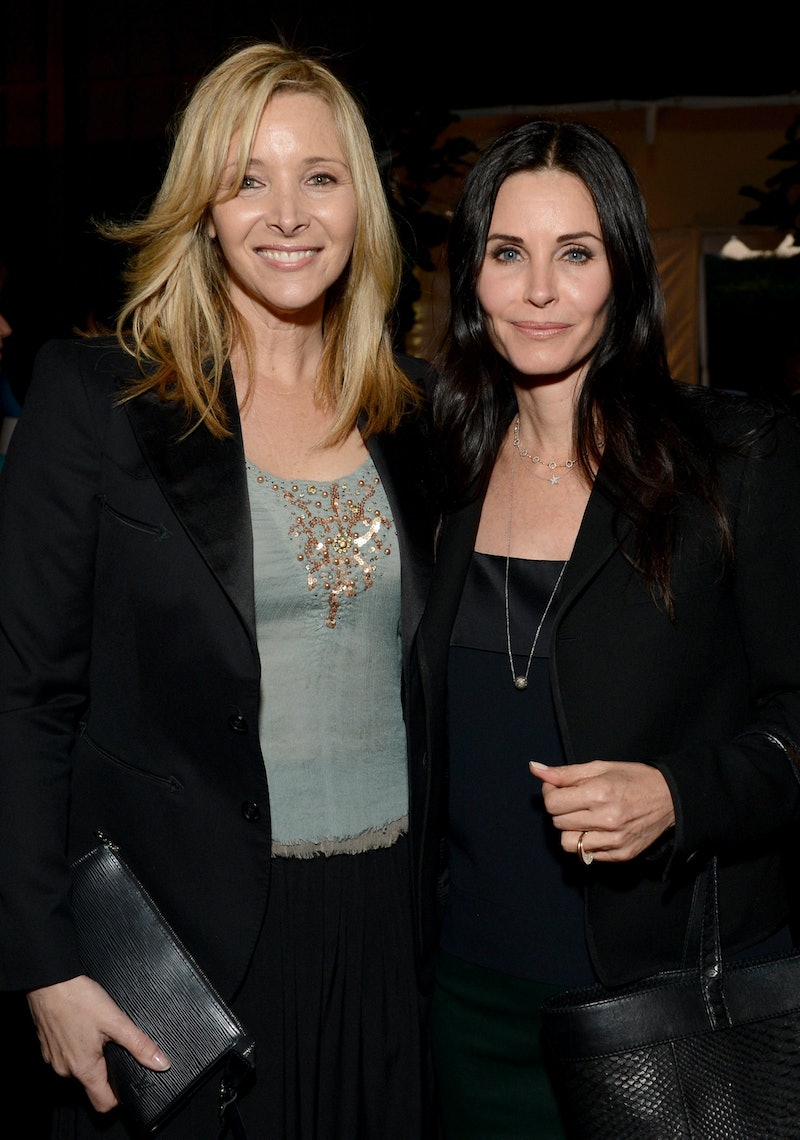 Ever the perfect host, Ellen DeGeneres recently put together a Courteney Cox and Lisa Kudrow Friends reunion that is sure to make '90s sitcom fans' hearts swoon. On Tuesday, January 29, the talk show host pulled out all the stops to help Cox promote her new Instagram page and Facebook series Nine Months with Courteney Cox, according to E! News. For Cox's appearance, DeGeneres flawlessly recreated the layout of the Central Perk coffee house set to commemorate the actor's very first Instagram photo and it surely turned into a moment that fans will never forget.

While pretending to drink coffee, the 61-year-old comedian revealed that they were sitting on the actual couch used during the filming of Friends and casually said to Cox, "I wish Lisa Kudrow was here because that would be fun." And in that moment, Kudrow magically appeared on stage, surprising not only Cox, but legions of fans in the audience that couldn't seem to get enough of the amazing reunion. Cox, excited about Kudrow's presence, jokes, "This is my first Instagram post? Oh my God, It's all downhill after this."

As she chatted with the women, DeGeneres was sure to remind the pals to follow one another on the social media site while making a great reference to Kudrow's character Phoebe's legendary stint as a singer in the cafe. Speaking to Kudrow, DeGeneres said, "I wish you had your guitar here. That would be fun." With Kudrow joking, "Wouldn't it? But who would play it?"

All-in-all, Cox seemed extremely appreciative of her former co-star's support and thanked her for showing up. Never one to miss a beat, Kudrow quickly quipped back with a Friends theme-song joke, saying, "Oh, I wanted to be there for you. Get it?"

The talk show gathering was in support of Cox's new docuseries about pregnancy which premiered on Jan. 22 via Facebook Watch, according to Deadline. The series, which airs on Tuesdays and Wednesdays, follows the stories of families who are experiencing challenges during their pregnancies.

While the DeGeneres Show reunion made for a great TV moment, Cox, Kudrow and many other cast members from the iconic sitcom have remained close since the show wrapped nearly 15 years ago. Just last week, DailyMail reported that Cox and Kudrow were spotted out at lunch together in Beverly Hills, California along with Kudrow’s father Lee. Cox and Kudrow’s January 22 outing came just four months after they hung out for dinner to celebrate the 24th anniversary of the Friends premiere in September 2018. Prior to that, they were spotted together at the American Film Institute’s 46th Life Achievement Award Gala in June 2018, according to People.

It seems that fans of the show will have to hold moments like these close to their hearts since the notion of a Friends reboot has been totally shut down by both NBC execs and the show's creator. Although the idea of a reboot was supported by some cast members, show-runner David Crane revealed to The Wrap that a Friends reunion was “never happening." Meanwhile, The Hollywood Reporter noted that NBC Entertainment Chairman Bob Greenblatt explained, "We can't just reboot everything," when asked about the possibility of the show's revival.

While there seemingly won't be a reboot anytime in the near future it's dafe to say that after a decade of laughter, Friends will forever remain a major pop culture staple which will continue to live on through reunions such as these.