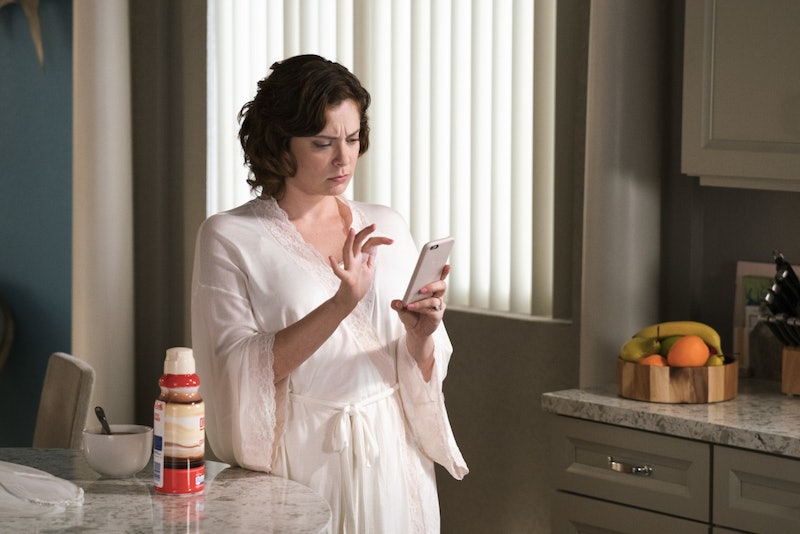 It's no secret that underneath all the romantic drama and hilarious hijinks and dysfunctional relationships The CW's musical dramedy Crazy Ex-Girlfriend is actually about a woman living with anxiety and mental illness. Even in this day and age there is still a taboo and stigma linked with those words and ideas, so the fact that a TV show can take such a dark issue like depression and turn it into comedy while still handling it responsibly is no laughing matter. There's a reason why The CW renewed the critically-acclaimed series.

The show's creator and star Rachel Bloom has always been vocal about her own struggles with anxiety and depression, so Rebecca's onscreen journey is one very close to her heart, and something to which most viewers can relate. It's realistic, raw and unapologetic. It's not something represented very often on TV, so it's definitely a good sign that Season 3 is going to continue exploring mental illness in a very real way.

Last night's jaw-dropping Season 2 finale ended with Rebecca getting left at the altar by Josh Chan (Vincent Rodriguez III), the object of her romantic obsession, and her vowing to "destroy" him as a woman scorned. But perhaps the most intriguing part of the episode, "Can Josh Take a Leap of Faith?" is how the show finally gave viewers a glimpse of Rebecca's secret past when she had to spend time in a court-ordered mental institution. Apparently, she had been in this situation before: her married Harvard law school professor ended their affair, and she couldn't handle the rejection ... so she set his home on fire. This flashback spoke volumes about how Rebecca is repeating her past mistakes, and her history of mental illness all stems from her absent father abandoning her when she was just a child.

But of course, she would never admit that to anyone. So when her father called her "crazy" after she was left at the altar, her response of, "Little bit!" was shocking. Has Rebecca finally come to some kind of realization about her own mental health? Has she accepted that she needs help?

"That’s a good call," executive producer Aline Brosh McKenna tells Bustle along with a small group of reporters at The CW office in Burbank. "One thing I know we are going to explore next year is what has her past mental health history been. So, if you’ll notice here, she got sent to a mental health facility where they put her on way too much medication. You see her completely zoned out, right? And they’re giving her meds and she doesn’t even look to see what they are and she’s just sitting there, humming all day. She’s had bad experiences with being diagnosed and given medication that makes her feel bad, which is a very common thing with people who have disorders."

Rebecca started to take steps toward self-care this season by seeing a therapist regularly ... but she never actually listened to what her therapist said. That is definitely progress from what we've seen from her in the past, though.

"Whatever [meds] she was given, she felt like was not appropriate and obviously when we see her in New York, she’s zonked when we meet her in the pilot," McKenna says. "So we’re going to learn a lot more about her past struggles with her mental health and to reign in these issues that she has. She has a core fear of being crazy or feeling crazy because she has moments in her life where she feels untethered, and a lot of the time, when she hears the word crazy or someone else says the word crazy, her instinct is to say, 'That’s not a fair term, that’s not a real term,' which is true."

According to the showrunner, Rebecca's constant attempts to "use her intelligence to bracket the word" crazy speaks to her underlying issues that she never truly faced before her finale confrontation with her father Silas (John Allen Nelson).

"In that moment, I think she owns the fact that, like, ‘Well, people think I’m crazy, and it’s partly your fault, asshole,’" McKenna says. "Her dad is very charming in a way that you could see particularly a child would be susceptible to. I love the acting choice he made — she gives him the check and John put it in his pocket. He never looked at it, and that’s what a con man does. He sort of can’t help it either, he just is the way he is, but this was really the episode to see that her seductive and unavailable and selfish but charming and self-protective father, that he really is the Bundt cake mold into which she has poured every man since then, in a way."

She pauses, then continues, "I mean, that’s a little bit of a reductive way to look at it, in some ways she’s clung to this idea that they were in love and that somehow he got whisked away by an evil king or something. She has to come to terms with the fact that he chose to leave her because he is, as Dr. Akopian (Michael Hyatt) says, he’s a negligent parent and an incompetent parent."

"When you're in the mental state that she's in, the boundaries between the past and the future, it's very much a story that she's telling herself about why she doesn't get the love that she thinks she deserves and wants," McKenna says. "Her quest for love and fulfillment dates from childhood when she had a seductive, distant father who then cut out completely, and so I think these issues are lifelong. I'm sure we will see more things from her past."

But let's be honest, it's not as if her mother Naomi (Tovah Feldshuh) was any better. While Naomi didn't abandon Rebecca, she wasn't exactly the best maternal influence in Rebecca's life either.

"If you notice, her mother does not rush down to comfort her at the end," McKenna says. "There's a little bit of Grey Gardens that happens with the two of them and she felt like they had made a vow to not tell people about the crazy stuff, so Rebecca is now making a scene, causing a scene ... She was very upset the first time Rebecca tried to kill herself as you'll remember in the pilot — she says, 'The knife wasn't sharp and you inconvenienced your aunt Nancy.' She's upset that she is making a scene at her wedding and that it's going to cause her some embarrassment that she was about to pitch herself off a cliff in front of all these people, yelling about Robert. Naomi likes things to look good, no matter what's underneath them, so she's not happy about this."

More like this
Here’s What Happens To Bill & Frank In 'The Last Of Us' Video Game
By Brad Witter
Linda Ronstadt’s “Long Long Time” Plays A Pivotal Role In The Last Of Us
By Brad Witter
Netflix Shut Down 'Bridgerton' S3 Rumours About A “Very Dark” Storyline
By Bustle
Michael B. Jordan Tackled His "Public Breakup" With Lori Harvey On 'SNL'
By Brad Witter
Get Even More From Bustle — Sign Up For The Newsletter
From hair trends to relationship advice, our daily newsletter has everything you need to sound like a person who’s on TikTok, even if you aren’t.