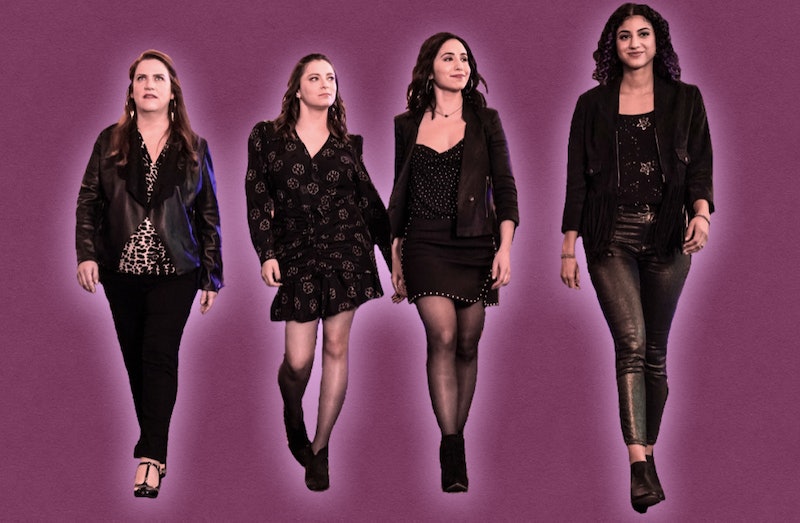 From Glee to Rise, from Nashville to Empire, the tradition of the musical TV show is a rich one. It's something that Crazy Ex-Girlfriend has been explicitly aware of from the get-go, and its on-point parodies of musical genres and tropes have been part of the show's calling card from day one. But while other musical TV shows had their own unique takes on the genre, none of them fully figured out the connection between their music and the inner lives of their female characters: Glee and Rise both chose, inexplicably, to focus on unlikable male protagonists, while the female leads on Nashville and Empire spent a lot of time acting out soapy clichés. So as much as I’ll miss Crazy Ex-Girlfriend’s on-point parodies of my favorite Broadway shows (an entire episode dedicated to mercilessly mocking Cats? Yes please!), what I’ll miss the most is the way the show used its musical moments not just for laughs, but to build the most eloquent, moving, and realistic depiction of a female ensemble on TV today.

Even without its musical elements, Crazy Ex-Girlfriend became an unusually rich depiction of female characters over the course of its four seasons. All four of its main women began as stereotypes: Valencia (Gabrielle Ruiz), the sexy mean-girl romantic rival; Heather (Vella Lovell), the maybe-stoner cynic; Paula (Donna Lynne Champlin), the supportive “team mom”; and Rebecca (Rachel Bloom), well, it’s right there in the title. But slowly, without any flashy “aha” moments, these four characters became complicated, three-dimensional, and shockingly realistic.

Part of that is the trope-subverting nature of the show overall. Every time we think we’ve figured something out about a character or a plotline, the show zips in the opposite direction. On most shows, Valencia and Rebecca would never have had a relationship that didn’t revolve around Josh, their shared ex; on Crazy Ex-Girlfriend, their friendship moves way beyond that former rivalry pretty quickly, and lasts long after either one’s relationship with Josh. It’s a testament to the fact that this is a show that’s only interested in tropes in relation to how they can be gleefully subverted.

But ultimately, it’s the music that provides the greatest insights into these characters and their inner thoughts, because it’s the soundtrack inside their heads. Rebecca’s wildly manipulative early-season antics could make her firmly unlikable — until we hear her singing “I’m A Villain In My Own Story” and “You Stupid B*tch” and realize that she hates herself more than anyone else ever could, and suddenly, we sympathize with her. And she’s not the only one: songs ranging from Paula’s “After Everything I Have Done For You” to Heather’s “The Moment Is Me” let characters break free of their assigned roles and reveal bits and pieces of their interiority that, together, form full, human characters.

There’s a rule in musical theater about when to put something in song instead of in spoken dialogue: you do it either when you need something flashy and entertaining with a vague theme and lots of energy, or, more crucially, when there’s a significant emotional moment. Where other musical TV shows try to subvert or tweak this very classical formula, Crazy Ex-Girlfriend exploits this structure, paired with a witty, often casual lyrical voice, to give shading and nuance to its characters. While its men benefit from this too — Nathaniel and Greg both got infinitely more complex the more they sang — the music is, more often than not, about the inner realities of being a woman.

That’s not to say that it’s all angsty introspection. In fact, Crazy Ex-Girfriend’s best use of music is often its funniest. Through giggle-inducing, hilariously relatable, I-can’t-believe-that-got-by-the-censors levels of detail, songs like “The Miracle of Birth,” “Heavy Boobs,” and “The Sexy Getting Ready Song” turned sexist tropes into songs that are laugh-out-loud funny for how explicitly, uncomfortably awkward and real they are. Bloom has a remarkable knack for deflating tropes of all sorts, deconstructing the ideas we take for granted in our fiction, and it’s never more apparent or more relevant than when she turns her talents to chronicling what it’s really like to be a woman in song. The joke isn’t in how ridiculous and exaggerated these characters are. It’s in the revelation that these characters are us, but with musical numbers.

Because that’s the thing that most people don’t get about musicals. The pop-culture stereotype of a musical is an old-timey romance with cringey, outdated gender politics and jazz hands galore – something that Crazy Ex-Girlfriend has taken pains to parody mercilessly. But what musicals actually do is give us a way to say the things we can’t say because they’re just too much. So we sing them instead, giving us a means of getting inside the characters’ heads, rather than simply seeing how they present themselves to the world. Where other shows have to resort to stern voiceovers or awkward dream sequences, Crazy Ex-Girlfriend’s musical roots allow it to explore its characters’ psyches and inner lives within its own unique brand of reality.

Although musicals in general tend to attract a more female demographic (the Broadway League’s 2018 demographic report found that 66 percent of Broadway audiences are female), TV musicals over the past decade have struggled with how to use the format to effectively shatter that male-centric storytelling gloss. The majority of TV musicals (Glee, Rise, Empire, even Galavant) have defaulted to a male protagonist, with female characters who are often (but not always, to be fair) pigeonholed into stereotypes: the ingénue, the diva, the older woman, the comic relief. Perhaps it’s because musicals lend themselves to heightened realities, we end up with soapy and/or archetypal characters. Crazy Ex leans so far into that heightened reality that we come out the other side — we start with archetypes and end up with fully realized characters whose struggles-in-song seem like parody but actually hit home for their specific, relatable, sometimes ugly and sometimes joyful moments.

It’s a testament to the skill of Bloom and co-creator Aline Brosh McKenna that every moment, even the silliest-sounding songs, still feels organic to the characters. This wide array of music is also an indicator of the rich inner lives of these characters — and it’s the music that helps us understand just how complex these women are. The musical elements of Crazy Ex-Girlfriend might seem like the most heightened and unrealistic part of the show, but they’re actually the most reality-revealing of all.