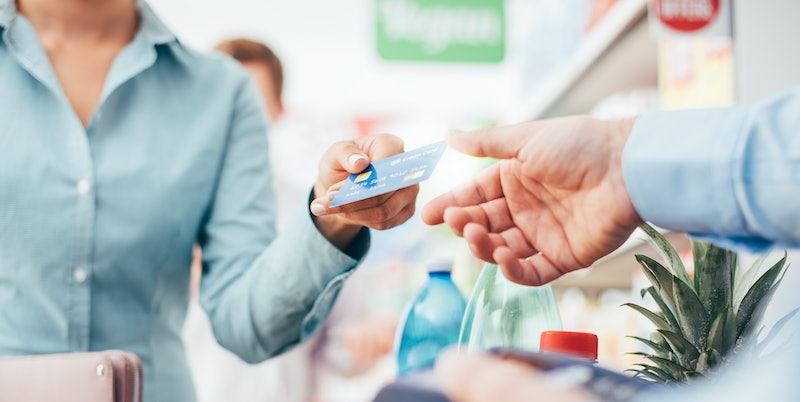 Stokkete/Shutterstock
By Brandi Neal
May 24, 2019

Of all the things you clean on the regular, it's likely never occurred to you to clean your credit cards. I'm a total germaphobe, and it's never occurred to me. But I'm definitely going to start because an experiment from LendEDU found that credit cards are have more germs than you'd expect — in fact, this research found they're dirtier than a public restroom in New York City and almost four times grosser than a NYC subway pole. Oh my gross.

The experiment used a device that tests for bacteria on surfaces and found that the front of most credit cards had an average germ score of 285 while the back of the cards had a score of 317. The filthiest card tested had a score of 1,206. Just to put that into perspective, the suggested germ score for tables in restaurants is 10 or less. And while you've always known that cash and coins are dirty, they're actually pretty pristine compared to credit or debit cards. Hundred dollar bills are the cleanest form of payment with an average germ score of 76, probably because most people don't walk around with a pocket full of hundies.

I don't know why credit card germs have never occurred to me before. Your cards are touched by hundreds of strangers, they're slid into germ-ridden public machines, and you set them down on filthy surfaces. Excuse me while I go wash my hands like a surgeon.

When it comes to the dirtiest things in New York City, credit cards fell right in the middle. Topping the list are bikeshare handlebars, fast foot restaurant door handles, and park benches. Surprisingly, the least germ-infested things in the city were subway poles and public restrooms. In fact, subway poles were the cleanest thing on the list by a pretty big margin. Mind blown.

I suppose no one thinks about cleaning things like bike handlebars, door handles, and park benches. But the subway and public restrooms are cleaned on the regular. And although cash and coins aren't as dirty as cards, they're still pretty filthy.

"According to research from Mastercard and the University of Oxford, the average bank note is home to 26,000 types of bacteria including E. Coli. And the average coin has more germs than on a toilet seat," Sean Perry, founder and director of cleaning company Neat Services, told LendEDU. "It’s perhaps not surprising given the number of people that exchange money on any given day, many of whom do not wash their hands before or after handling it."

The good news is that if you opt to use cards over cash, you can get rid of the germs by wiping your cards down every day. Consider doing this at the same time you clean your phone, which I hope you're doing because phones are 10 times dirtier than toilet seats.

In addition, wash your hands or use an alcohol wipe after touching communal items like door handles, credit card keypads, and apparently park benches. And it should go without saying, never ever put money or cards in your mouth.

More like this
The Guide To “Witches Stairs” & Why They’re Actually Great For Small Spaces
By Emma Garza
The UK Abortion Laws In 2022, Explained
By Sophie McEvoy
6 Abortion Advocates To Follow On TikTok
By Sara Youngblood Gregory
How To Protect Your Digital Privacy If You Need An Abortion Post-Roe
By Kaitlyn Wylde
Get Even More From Bustle — Sign Up For The Newsletter