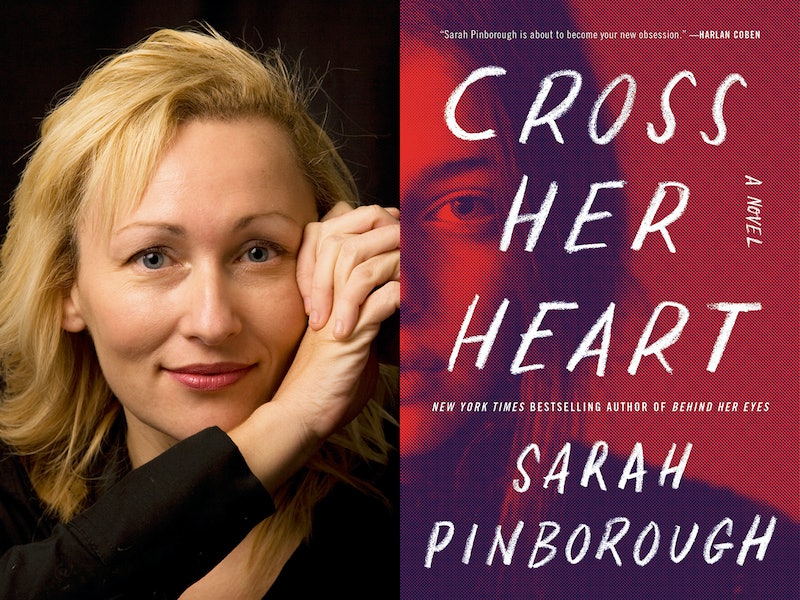 At least twice a week, I read a piece of news on the internet that forces me to think to myself, "That must be the plot of a Gillian Flynn novel." Sadly, more often than not, it's just real-life in all it's gory, creepy, horrifying, distressing glory. It's not surprising then that so many horror, thriller, and mystery writers have been inspired by true crimes in the creation of their fictional tales. But how do authors find these stories — and how do they use them as inspiration without exploiting the victims of the crime in the process?

Sarah Pinborough, the author of Behind Her Eyes, 13 Minutes, and other books, is all too familiar with this dilemma. The thriller writer has turned to real-life for inspiration for her own novels, including her most recent release, Cross Her Heart. The book follows Lisa, a single mother with a terrible secret. When her past is revealed to her daughter — and the world — it sets off a dangerous chain of events for them both.

In an interview with Bustle, Pinborough reveals how her fiction is inspired by true crime — and how she works to ensure that she's as thoughtful as possible about using real stories as the basis for fictional thrillers:

Bustle: Can you tell us about the true story that inspired Cross Her Heart?

Pinborough: I could but then I'd have to kill you. But seriously, I can't give much away without spoiling it. Cross Her Heart is very much influenced by a case from the late 1960s. Not having been born until the ‘70s I didn't know much about the case but after reading a book on it, I blended details of that case with those of a more recent one to use as a basis for my novel.

"Cross Her Heart is very much influenced by a case from the late 1960s."

Pinborough: I used elements of one real person's background and elements of a real crime: The kind of people involved, and the kind of life they'd had. There are slight similarities to the real event but I changed some elements, especially about the victim. I used quite a lot of real legal points and studied court documents and read up on the aftermath, but all my characters are fictional creations and the crime is a fictional one.

Pinborough: I think it really depends on whether the story is clearly re-telling the whole tale of a particular crime. I loved Leila Slimani’s The Perfect Nanny and wondered how the family she based the story on felt about the book because it was so clearly drawn from the New York case, although reset in Paris, and I imagine the characters were quite different to the couple from real life. It's so difficult because writers are vampires in some ways, and we always like to explore human reactions to crimes, and if you write crime novels or thrillers, then you want the emotional resonance to be true. However, the only novels I've written in which nearly all the characters were real people and the crimes were all real crimes were Mayhem and Murder and they were set in 1898 and 1901 so I really didn't have to worry that I'd upset anyone! In 13 Minutes, which was inspired by the murder of a U.S. schoolgirl, I changed everything, including who was guilty and who was innocent. With Cross Her Heart a lot of UK people might guess the case that inspired it, but the characters are quite different, and I hope I've treated anyone who may still be living with respect and sensitivity.

"It's so difficult because writers are vampires in some ways, and we always like to explore human reactions to crimes, and if you write crime novels or thrillers, then you want the emotional resonance to be true."

Pinborough: Ha! Yes, the whole 'fridging' thing. (As in, "woman found in fridge starts the man's journey," just in case someone hasn't heard the term. I only learned it recently.) I think writers all consider much more how we use "woman as victim" these days and that's a good thing, but for me personally, I wasn't fueled by outside gender politics as it were, but rather my own. I reached an age a few years ago — I'm 46 now — when I became interested in telling stories about women – the good, the bad and the ugly of women — and therefore they couldn't just be victims. That didn't interest me. I think, especially with Cross Her Heart, all the action in the novel is driven by women. There are men in my books obviously, some good and some bad, but they're not "in charge" of the book. For my past few books, and the one I'm currently writing, it's all about exploring female dynamics. I'm tired of the saint or hooker role that women so often have in a story. I prefer the grey areas that most women try to navigate while also running families and holding down jobs and trying to be sexy twice a week and still feel like themselves rather than simply someone's wife or mother!

"I reached an age a few years ago — I'm 46 now — when I became interested in telling stories about women – the good, the bad and the ugly of women — and therefore they couldn't just be victims."

What are some books, movies, or podcasts based on a true story (true crime or otherwise) that you always recommend to friends?

Pinborough: Oh my gosh… Well, I was recommending The Staircase to people for the last couple of years before Netflix made it famous. Wolf Hall (the TV adaptation as well as the novel) I recommend all the time because I'm a sucker for a Tudor story. I don't really do podcasts because I've never really got into them. I love pretty much any biopic ever made, doesn't matter how terrible, because I'm fascinated by people's life stories, especially those who end up soaring high, because there is so much damage done by ambition and money. Anything based on true life gangsters I love too. I'm not a very highbrow person — I tend to love stories about people who lived juicy lives!