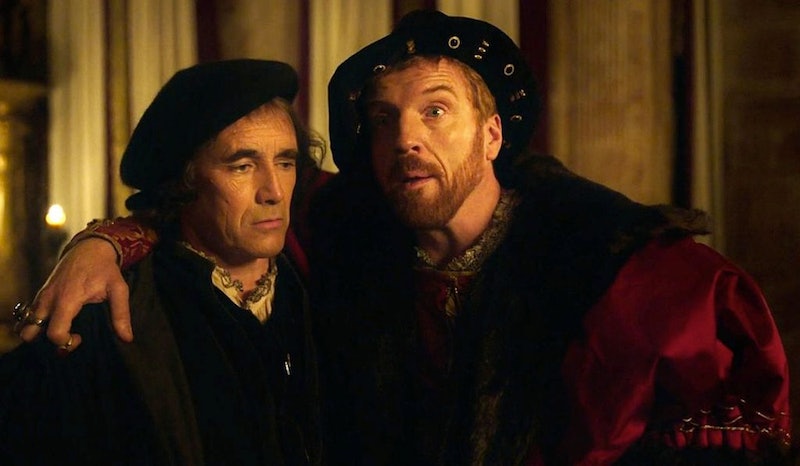 The bad news is the last episode of the glorious miniseries adaptation of Wolf Hall airs Sunday. The good news is that Hilary Mantel is currently hard at work on the final installment of the Thomas Cromwell trilogy, which is sure to be just as full of royal shenanigans, political machinations, assassinations, and incredible characterizations as Wolf Hall and Bring Up the Bodies. The other bad news (sorry!) is the book, The Mirror and the Light, may not come out FOR A YEAR. Meaning very shortly I am going to be very hard up for my bloody-minded-historical-fiction-with-a-dash-of-humor fix.

I'm sure I'm not going to be the only one suffering from Thomas Cromwell withdrawals, and although Wolf Hall leaves ginormous, Sasquatch-size shoes to fill, there are other excellent options out there if you just can't get enough historical fiction. Mantel's books are so special because of the way she takes recognizable historical figures — Cromwell, King Henry VIII, Anne Boleyn — and turns them into the people. When she describes the deep love Cromwell has for his family, or the way Henry VIII looks at Anne Boleyn with such longing (obvi before he wants to cut her head off), these denizens of the 1500s feel as familiar as your friends and neighbors. It's historical fiction at its finest.

With that in mind, although I can't promise all the books on the following list will be quite as epic as Wolf Hall , (or quite as strictly historical fiction— some are what I like to call "historical fantasy") I can confidently say that they will get you happily through the wait for Mantel's last installment. So strap on your crinoline (or codpiece) and get ready to travel back in time.

If you can't get enough of Wolf Hall's political intrigue, try:

As much as I love Elizabeth Taylor, no portrayal of Cleopatra had really done justice to her sheer brilliance until Schiff's Pulitzer Prize-winning novel. The woman was a political boss who negotiated and strategized her way to the most powerful position in the world. She was undeniably ruthless and occasionally brutal, but her political genius and survivor's spirit are undeniable. I mean, we're still talking about her 2100 years or so after her death. Enough said.

Obviously, A Game of Thrones isn't so much historical fiction as it is fantasy, but nobody writes bloody political scheming, backstabbing, and subterfuge like Martin. He is a true master at making the political personal, and vice versa. Every person in Westeros with the smallest bit of leverage is trying to weasel his or her way to power, willing to sacrifice honor, love, even life, to be the person on the Iron Throne. Anyone who thinks politics are boring has never read Martin, and his ability to expose human nature at both its finest and most depraved is remarkable.

The Pillars of the Earth by Ken Follett

If sweeping epics are your thing, then Follett is your guy. The Pillars of the Earth is my favorite Follett work, because it has all the best aspects of a juicy historical fiction, plus a trio of strong, resourceful women characters to boot. The story is set in 12th century England and centers on the building of the greatest Gothic cathedral the world has ever known. Its construction fuels epic battles that pit brother against brother, and of course, church against state. The unpredictable, volatile relationship between the latter two makes for some particularly unforgettable political maneuvering. There's also romance, a curse, and some assassinating and hanging. Basically, everything you love about historical fiction.

If you want another saga with strong women like Wolf Hall's, try:

Gabaldon created a Saga with a capital "S." I think there are something like 170 books in the Outlander series now, (OK, maybe eight) but either way enough to keep you happily tucked away in the 18th century for a while. Claire Randall, former combat nurse and main protagonist extraordinaire, is feisty, smart, and self-reliant. All qualities that come in handy when she is inexplicably transported from 1946 to 1743. But it's worth it, because she meets the hunky, hot-blooded Scotsman James Fraser.

And the rest is all epic battles, steamy bedroom scenes, and Randall being pretty much a bad-ass. Plus now there's the Starz TV adaptation, so you may actually never run out of Outlander.

The Mists of Avalon by Marion Zimmer Bradley

I remember this fat, juicy paperback sitting on my mom's nightstand when I was in grade school. We were allowed to read pretty much whatever we wanted as kids, but The Mists of Avalon was off limits. So, of course I was dying to get my hands on it, and I basically didn't put it down from the moment I read the first page. Bradley masterfully tells the story of King Arthur from the women's perspective — Viviane, Gwynyfar, Morgaine and Igraine. Turns out that Viviane, Lady of the Lake and High Priestess of Avalon, has some similarities to Cersei Lannister. So you can probably imagine what my mom was leery about.

But it's truly an epic story about women, with all the great historical fiction elements. OK, so maybe King Arthur and Camelot never actually existed, per se, but the time period did. This is an amazing, historical-fiction-fantasy hybrid filled with goddesses, magic, and knights.

Tademy's family saga follows four generations of women born into slavery along the Cane River in Louisiana. This is the story of Tademy's actual family — she weaves genealogy, history, and fiction together to recreate the lives of her ancestors. Along the way she uncovers illegitimacy, rampant racism, and a corrupt society. But the women of Tademy's family refuse to stay subservient, and they scheme, manipulate, and sacrifice in order to give their children a better life. These are incredible women, and their indomitable drive to not just survive, but succeed and prosper, will completely suck you in.

Gregory is the indisputable queen of scandalous royal intrigue, and the first novel in her Tudor Court series doesn't disappoint. The title refers to Katherine of Aragon, the first wife of King Henry VIII. The daughter of two great monarchs, she was smart, strong, and stubborn, all traits that came in handy when she was kicked to the curb after the death of her first husband, Prince Arthur, Henry's elder brother and the heir to the crown of England. Refusing to be swept aside or to fall into the avaricious hands of her father-in-law, with cunning, manipulation, and courage she eventually becomes Queen of England. Katherine of Aragon had a fascinating, if tragic, life, and Gregory makes the most of all the dramatic circumstances and scandalous court happenings. It's a thoroughly entertaining read.

Poor Marie Antoinette. Sure, she may have told the starving people of France to just "eat cake," and spent all their money on elaborate hairdos, but in many ways she was simply a product of her upbringing and environment. Naslund creates a real woman from the myth, and her dramatic reimagining of the life and times of the infamous Marie Antoinette is a gem. She was flawed, certainly, but also generous, loving, and affectionate. Shunned from her arrival (when she was 14!) as an outsider, and even more ostracized when she failed to provide the Dauphin with an heir, (he couldn't consummate the marriage) she was deeply lonely.

Naslund gives us a fascinating glimpse into the difficult, and often dangerous, art of navigating life in a royal court. Sometimes, as in the case of Marie Antoinette, failing to do so is lethal.

The Forever Queen by Helen Hollick

I stumbled on this literary wonder totally on accident, and I will be eternally grateful. Do you see the subtitle? "Sometimes, a desperate kingdom is in need of one great woman" — it was love at first sight. Emma of Normandy, the Forever Queen, is the bride of the King of Saxon England. When he turns out to be a complete dud, both as a king and as a husband, it's up to the resourceful, brave Emma to save her people from the invading Danish Vikings.

Emma of Normandy is one of the great heroines of English history, and Hollick brings her to vivid life. Not only is this excellent example of historical fiction the tale of a truly extraordinary women, it also has all the other great stuff: epic battles, revenge, bloody executions, love, hate, treachery, triumph... I wish I could read it again for the first time.