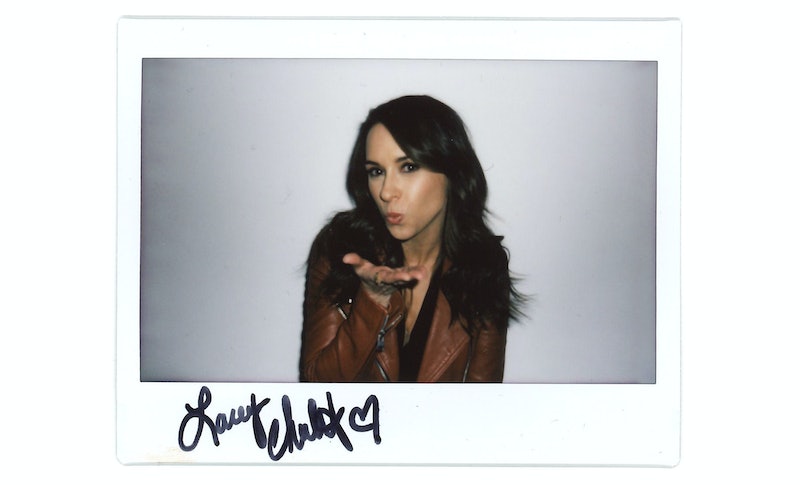 When celebrities hang out with Bustle writers, we want to give them the chance to leave their mark. Literally. So we hand them a pen, a piece of paper, a few questions, and ask them to get creative. The rest is up to them. This time, Crossword Mysteries: A Puzzle To Die For star Lacey Chabert is leaving her mark in the Bustle Booth.

What do a bespectacled redhead with an uncanny ability to talk to animals, a teenager coping with the loss of her parents, and the heiress to the Toaster Strudel fortune all have in common? They're iconic characters brought to life by Lacey Chabert. But beyond playing a major part in millennials' childhoods with roles on Wild Thornberrys, Party of Five, and Mean Girls, the 36-year-old has found another pretty sweet niche: Hallmark movies.

As a veteran of a whopping 17 movies for the channel, Chabert knows exactly what makes them so appealing to audiences. "Especially now more than ever, people want to feel good," she tells Bustle. "To be able to sit down in front of your TV for two hours and know that there's going to be a happy ending, and you'll be moved and you'll laugh, is a positive experience."

Though Crossword Mysteries: A Puzzle To Die For (premiering Sunday, March 10 at 9 p.m.) is just Chabert's latest in a long line of made-for-TV movies, it marks her first foray into the mystery genre. Chabert plays Tess, a crossword puzzle editor who teams up with a police detective (Chabert's frequent Hallmark co-star Brennan Elliott) to track down a murderer who may have planted clues in her puzzles. What follows is a twisty puzzle of its own.

"It was different than what we’ve done together before," Chabert says of how this project compares to she and Elliott's previous four Hallmark movies together. And even if Tess and co. do solve this movie's mystery, Hallmark is far from finished making movies about crosswords and murder: the Crossword Mysteries crew is already gearing up to shoot the next three installments in the series soon.

"I continue to be blown away by the loyal following that Hallmark has," Chabert says. "I always try to raise the bar from one project to the next and I hope they feel I've done that with Crossword."

It's a mantra that Chabert has repeated throughout her career, including in the aforementioned roles of Eliza Thornberry, Claudia Salinger, and Gretchen Wieners. "I really do put my heart into everything I do," she explains. "So when someone tells me they appreciate it, and they're quoting the lines — with Mean Girls, for example, 15 years later — it means the world to me." And while she admits she's "thrilled" to be part of such beloved projects, she's even more excited about her future. "I hope it's just the beginning," Chabert says.

For more about Chabert, check out her answers to our Bustle Booth questionnaire below.