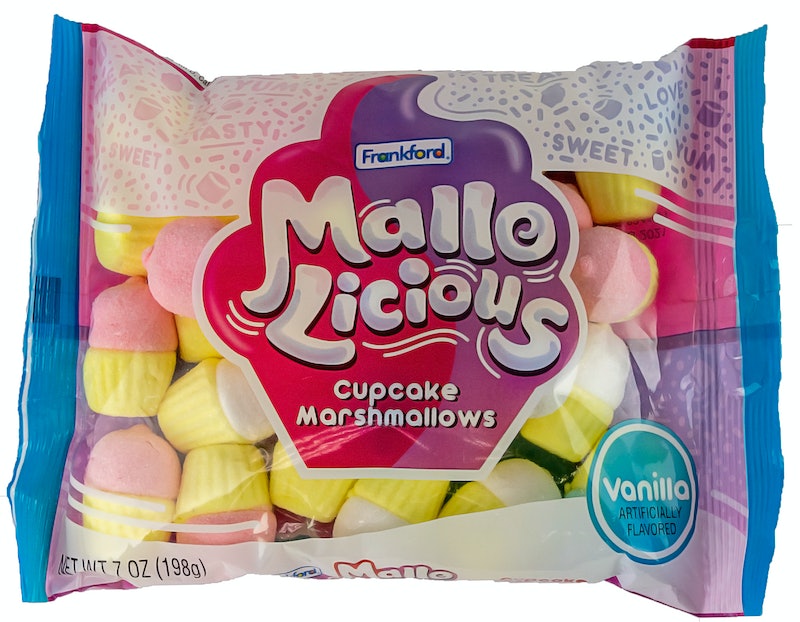 Have you ever wistfully stared at your dessert plate of half marshmallows, half cupcake, and thought to yourself how deeply inconvenient it is to have to move your hand to switch between the two? The universe heard about your plight, and has responded with Mallo-Licious's Cupcake Marshmallows, which are about to hit shelves at Walmart. The marshmallows, which come shaped and colored like teensy pink and white-frosted cupcakes, don't just look the part — they're also vanilla-flavored, giving them that distinct cupcake taste you know and love. I don't know about y'all, but I am personally standing with one foot in the text of this article and the other in front of someone's fireplace, turning this into the most delicious s'more of my life.

Per an exclusive email to Bustle, these Mallo-Licious Marshmallows from Frankford Candy, along with a whole host of other new flavors, are launching exclusively at Walmart, and will be rolling out nationwide over the next few weeks. The Cupcake Marshmallow may be a full-blown dessert hybrid, but the other variations have a fruity twist. Two of the flavors include a Banana and Sour Apple flavor, two flavors that are rarely explored in the marshmallow field — perfect for a grilled Banana Marshmallow peanut butter sandwich or, dare I say, a green Sour Apple Marshmallow topping to a spooky Halloween pie?

The two other two varieties about to hit Walmart's shelves aren't just unique for their flavors, but because they are legit filled with more dessert. The Chocolate-Filled Strawberry is, in fact, a strawberry flavored marshmallow that has been stuffed with chocolate. I imagine the resulting s'more is so decadent that all other s'mores are quaking in their graham crackers. The fifth and final flavor might be the most unusual of all — a Jelly-Filled Sour Peach marshmallow. I'm not even sure what you could turn it into baking-wise, since honestly the whole jelly situation just sounds intriguing enough on its own. Perhaps as the garnish to some kind of sour drink, if you're living large and peachy.

While these are all pretty legit snacks to just eat directly from the bag, I implore you to also consider all of the infinite possibilities of things you can make with marshmallows (aside from the classic, of course, which is sticking them in the microwave for 30 seconds and watching them explode). You could turn any of these into an intriguing Rice Krispy Treat, for instance, or chop them up into smaller pieces to bake in brownies or cookies for an extra twist. If you wanted to go full marshmallow pro, you could always opt to bake them into the inside of a cupcake (imagine the Banana flavor inside a chocolate cupcake with peanut butter frosting — you're welcome!). But of course, there's always the classic marshmallow mainstay of hot chocolate, which seems to suit the Chocolate-Filled Strawberry best.

Each bag of the Mallo-Licious Marshmallows will retail for $2.47 per pack in Walmart stores, where you should be able to spot them in the next coming weeks. Happy Marshmallow Season, y'all!