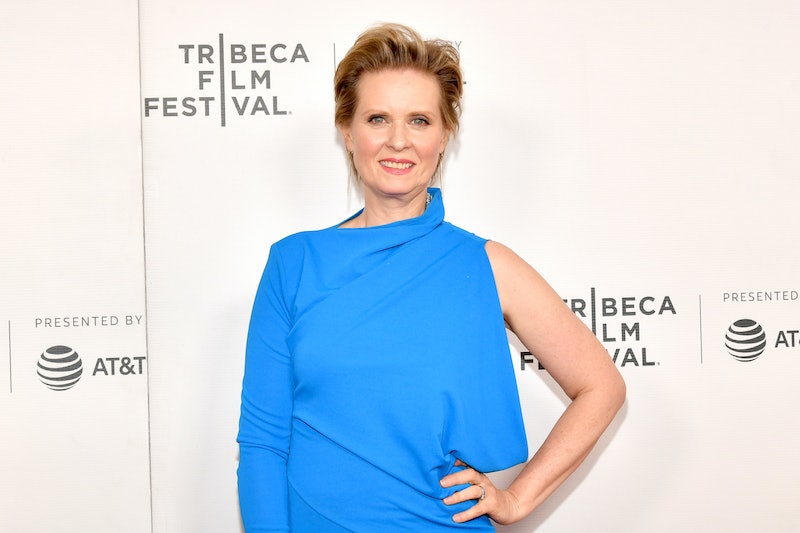 Cynthia Nixon proved herself to be a strong feminist voice when she joined New York state politics in 2018. And so it's no surprise that when she was recently asked about how her iconic HBO television show, Sex and the City, would be different if it were made today in 2019, she narrowed in on the show's brand of feminism. Most notably, Cynthia Nixon's critique of Sex and the City was exactly what Miranda would say.

Nixon has long been considered a total Miranda IRL — she even proclaimed herself a Miranda Hobbes in an essay for Refinery29. But some fans have also noted that differences between Nixon and her lawyerly, outspoken character on the hit HBO show, namely in that Nixon seemed more aware of the world outside of Manhattan's Upper East Side. And these differences were on full display in her recent comments.

Now don't worry, SATC fans, Nixon didn't fully pan the early 2000s series starring Sarah Jessica Parker, Kim Cattrall, Kristin Davis, and herself. Rather, she suggested some ways it could have been improved. "There was so much debate when [SATC] came out about whether it was a feminist show or not, which I always thought was stupid — of course it’s a feminist show. But I think it has a lot of the failings of the feminist movement in it. In that it’s like white, moneyed ladies who are fighting for their empowerment. In a bit of a bubble," Nixon said at the Tribeca Film Festival premiere of her new film, Stray Doll, via Indiewire.

As for how the show could be changed if it were to be remade in the context of 2019, Nixon told IndieWire that the best place to start would be in casting. "Well, I certainly think we would not have all been white, God forbid," the actor said. She continued, "One of the hardest things for me — it was at the time, too — is looking back and seeing how much of it centered around money, right? And how, Steve, my [character’s] husband, was like the closest we got to a working class guy, you know? Never mind a working class woman, right?"

Ever since Sex and the City wrapped in 2004, one of the most debated unsolved mysteries of television has been how, exactly, Carrie Bradshaw (Parker) was able to afford such a lavish lifestyle, filled with designer shoes — never mind her Manhattan apartment — with a writer's salary. The fact that SATC existed in a fictional setting in which only one episode actually addresses Bradshaw's spending problems, Nixon said, is part of its charm, though.

"In terms of like, the perfection factor. In terms of always looking so incredible. And I know that’s the fantasy element, and in terms of the show that was important. But I think there’s a lot of ways that people can be visually compelling without looking — quote unquote — perfect," Nixon told Indie Wire.

As much as Sex and the City had its flaws, Nixon is right in affirming its categorization as a feminist show. All of that focus on female orgasms and female pleasure was revolutionary for television at the time. It's certainly difficult to re-watch it now without cringing at Charlotte's refusal to leave her Park Avenue apartment, or while Carrie lusts after a pair of Manolo Blahnik heels while never mentioning the level of privilege she's afforded in life.

Even though Nixon told IndieWire that she finds the show overly focused on perfection, her character, Miranda, always represented the most down-to-earth, relatable character. And many fans would agree, she'd be the one calling out Sex and the City's white feminism now, just like Nixon herself.