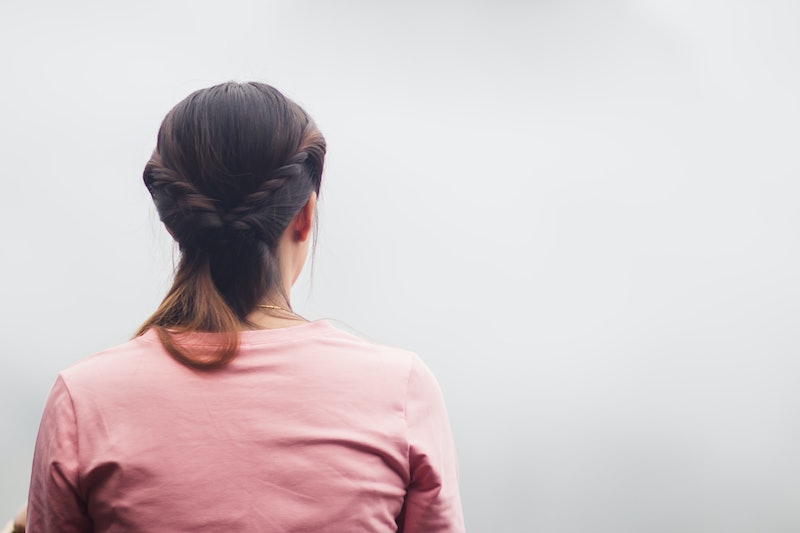 As you may have read, a few weeks ago on the podcast, Ladies Like Us, rapper T.I. discussed what he refers to as sex education for his daughter, 18 year-old Deyjah Harris. He told the hosts he discusses sex with her and emphasizes waiting — but he is also privy to results of her gynecological exams. "Not only have we had the conversation, we have yearly trips to the gynecologist to check her hymen," he tells the podcast hosts. "Yes, I go with her ... I will say, as of her 18th birthday, her hymen is still intact."

Not surprisingly, there was a social media backlash to T.I.'s self-reported behavior, which people accurately called out as abusive and creepy. Deyjah unfollowed her father on Twitter, then subsequently deactivated her social media. As of yesterday on Jada Pinkett Smith's Red Table Talk, T.I. addressed the comments, saying that his intention is to keep his daughter safe, and to look out for her best interests. He also said that his comments were taken the wrong way, and were partially a joke.

The incident has ignited conversations of the continued pervasiveness of feminine purity and virginity myths — the idea that abstinence is a marker of a woman's worth and morality. And the hymen has long and incorrectly been seen as a sexual activity tell-all, despite virginity testing being discredited. Nina Dølvik Brochmann and Ellen Støkken Dahl explain in the TED Talk, 'The Virginity Fraud,' "the myths about the hymen have lived on for centuries for their cultural significance. They have been used as a powerful tool in the effort to control women's sexuality in about every culture, religion, and historical decade."

Dahl says that women all over the world are still mistrusted, shamed, harmed, and in the worst cases, subjected to honor killings if they don't bleed on their wedding nights. These thoughts and practices center around the idea that sexual experience is unquestionably something to be saved, and historically, is to be monitored or safeguarded with the help of a father figure.

Bustle posted on Reddit asking users to share if they have ever felt like their fathers tried to control their sex lives. Reddit user ghostfromawishingwel tells Bustle on a thread, "I wasn’t allowed to so much as talk on the phone with boys until college. I snuck around a little in high school and ended up getting date-raped at 17. I went on to marry the first boyfriend my dad allowed me to have, whom I started dating my sophomore year of college. It didn’t end well."

HeckThisUsername says, "I was never forced into purity vows, or even religion but when I hit puberty [my dad] became more possessive of me. Later when I began using tampons instead of pads, he questioned my morality and virginity. He was convinced that women used them more as a pleasure tool than a feminine product. When I told him otherwise and that my virginity was not my only worth he tried to argue. He simply couldn't comprehend that it wasn't something I valued in myself and that I didn't plan to wait for my husband."

There are, of course, many fathers who are not enforcing control over their daughter's sex lives and encourage sexual autonomy. Many daughters feel true support from their dad's in this realm. A small group of respondents to The BDG Hive, Bustle's proprietary online panel of readers, all said "no" when asked if their fathers stepped over the line in regards to their sex lives, attempted to control their sex lives, or expressed ownership over the family.

"My father has never crossed any line or been inappropriate about any topics, especially my virginity," one respondent writes. "He raised me to understand I am an independent woman who makes my own decisions about everything in life, including my body."

But those fathers who do attempt to assert control over their daughters' sex lives don't see themselves as doing something inappropriate either, they usually view it as T.I. does — as a way of being protective and supportive.

"It all falls under the guise of being a good dad," Jennifer Hollinshead, founder and clinical director of feminist counseling center Peak Resilience, tells Bustle. "But what it actually communicates when a dad is concerned about protecting virginity, is that virginity is [an indicator] of worthiness of love or belonging." It's a way of saying that if a daughter engaged in sexual activity, she’s damaged somehow or has made a misstep, Hollinshead says.

"What is considered virginity or being 'pure' is also very heteronormative," Hollinshead says. "It communicates homophobia, because intercourse is not the only thing that [starts a sex life.] Young people have all kinds of sexual contact."

But the sexual purity storyline hasn't totally eroded despite opposing forces — like the prevalence of sex in the media, access to information, or sex positivity as a movement gaining traction — one that creates space for all forms of sexual/asexual expression. An inherent tension still exists in our fractured cultural discourse on sexuality that demands a response to, with, or against heteronormative male dominance. The concepts of purity and male control are deeply imbedded and can be difficult to identify, but they continue to impact the sexual experience and sexual health of young folks all across the U.S. Hollinshead traces it all back to being a "society based in patriarchy."

"Patriarchy literally means 'the rule of the father,'" she says, adding that while every father/daughter dynamic is different, in her work she has repeatedly encountered fathers who have great, mutually respectful relationships with their daughters who still don't talk about healthy sexual behavior. Instead, the idea that men are pigs or aggressors and women should be gatekeepers of their bodies is a narrative frequently perpetuated — and one that begins early.

Even subtle jokes fathers make about "sitting on the porch with a shotgun" or not letting their daughters out of the house, or never allowing their daughters to "date a man like me," can be harmful. They are all part of a repeated cultural narrative that supports monitoring a woman's sex life as though the woman is property.

"Control can be overt or covert," Hollinshead says. "Withholding love and affection because a daughter has begun to explore her sexuality is one covert way to control her behavior, meaning to show disapproval but not technically saying anything. Some fathers are more authoritarian and try to control daughters' sex lives through rigid rules or punishments for any sexual behavior."

It can create an environment where natural sexual impulses are seen as harmful and need to be downplayed, Hollinshead says. It can also add to the self-judgment women already face about their bodies.

Hollinshead does point out that control can also be communicated under the umbrella of love and faith, and this can be very confusing. Religious or cultural beliefs that create the framework for how a woman should conduct her sex and love life often have the intention to promote what is believed to be right and good. Having beliefs that guide or impact your view of sexuality can and may work well for some people — but restrictive, dogmatic, and prescriptive ideas can backfire. There have been studies that show people who take purity pacts and break them are less likely to have safe sex and more likely to have sex without protection. There is evidence to support that abstinence-only education might lead to greater instances of STIs and unintended pregnancy. In part, this can be attributed to feelings of shame, limited access to birth control, and misinformation.

"There is an inherent judgment in saying something like you should wait until marriage," Caitlyn Caruso, manager of state and local campaigns at Advocates for Youth, tells Bustle. "Even if fathers aren't saying directly 'you're impure,' that is the message received when young people are being told what is right and what is wrong."

"It's fair to say that young people having sex is still a relatively taboo topic," Caruso says. Caruso also points out that because young folks are reliant on their parents for everything, creating restrictive or judgmental ideas makes it difficult to be honest about their experiences if they aren't in line with familial ideals. If you aren't promoting autonomy around sexual experience, it communicates that you can't actually share openly. Caruso says this can and does lead to adverse consequences, like being less likely to seek sexual healthcare, or report harm or violation as it relates to sexuality.

In regards to communicating about sex and sex education with young folks, Caruso says that you want to create an informed, dynamic space for identity development, one that is as non-judgmental and non-pressurized as possible. Trusting that young people are experts of their own unique sexualities is something she can't stress enough. Fathers or parent figures believing they know best simply because they've lived through their own experience can disrupt a young person's sense of agency.

But know that if you are experiencing judgment or control over your sex life, you are not alone. Reaching out for guidance from sexual and reproductive healthcare providers or mental healthcare practitioners online or in person can be a good first step into getting personalized support. Your body and your sex life belongs to you.

Caitlyn Caruso, Manager of State and Local Campaigns at Advocates for Youth.

More like this
The Best Time To Date After A Breakup, According To Experts
By Bustle Editors
7 Women Share Their Best Orgasm Stories
By Lexi Inks
Virgo & Sagittarius Zodiac Compatibility, According To Astrologers
By Kristine Fellizar
Jennifer Coolidge Got A Lot Of “Action” Thanks To 'American Pie'
By Catharina Cheung
Get Even More From Bustle — Sign Up For The Newsletter