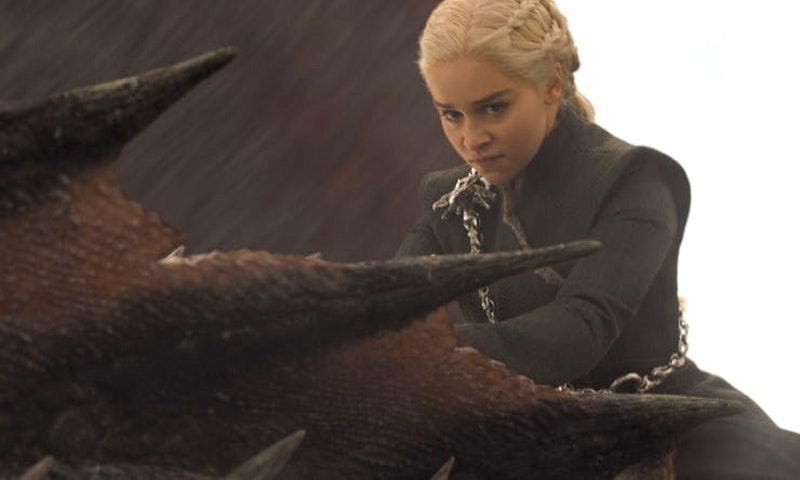 If you were just distracted by many of your favorite characters' fates hanging in the balance during the sixth episode of Game Of Thrones Season 7, "Beyond The Wall," no one would blame you. But despite the peril Jon Snow and crew were in, some fans were still able to take note of Daenerys' winter style. And once you got past her epic snow-ready coat, you may have noticed that she was sporting a familiar hairstyle. While it may seem objectifying to be discussing Daenerys' hair in Season 7 of Game Of Thrones rather than all of her accomplishments — you know, like bringing her dragons past the Wall to save the day — her braids being pulled back isn't just a fashion statement. As The Huffington Post noted, some fans have noticed that Dany's recent hairstyle on Game Of Thrones is most likely a callback to her first love (sorry, Jon) and a symbol of the fierce warrior she is.

Daenerys' platinum blonde locks, which are a notable feature of Valyrians and a trait of the Targaryen family, have always caused a stir since they are so striking. And while her long silver-gold braid in Season 7 is gorgeous — and quite practical for dragon-riding purposes since Daenerys shouldn't be dealing with her hair flying in her face — it's not about looking pretty. That's because the braid that Daenerys has been wearing in battle seems to be a reference to Khal Drogo's braid and the Dothraki custom of warriors continuing to grow their hair until they are defeated, as the fan Instagram page queendaenerys pointed out.

Like Daenerys' charming brother Viserys said when Daenerys married Drogo in the very first episode of Game Of Thrones, Drogo's braid was so long since he had never been defeated. And while noble families like the Tarlys may scoff at Daenerys for not being raised in Westeros, she is proud of her time spent in Essos and she learned a lot (good and bad) from the Dothraki. Beyond some Dothraki sticking by her side after Drogo died, the horselords have followed her across the Narrow Sea. The Dothraki have helped form the leader that she is today, so it makes sense she is using this hair element from their culture to pay homage to them and her beloved Drogo.

And to show that she is not one to be messed with — just like Drogo.

While her hair being a reference to Drogo hasn't been confirmed by the Game Of Thrones powers-that-be, it sure doesn't seem like a coincidence that Daenerys wore the braided hairstyle when she returned to Dragonstone in "Dragonstone," defeated the Lannister and Tarly armies in "The Spoils Of War," and took on the White Walkers in "Beyond The Wall." Add that to the fact that The Huffington Post wrote that Daenerys does wear her hair in braids (and sometimes with bells) to signify her victories in George R. R. Martin's books and it seems like a no-brainer that this hairstyle is completely intentional.

Knowing this Khal Drogo connection, it'll be a sad day if Dany ever trims those locks — and fans had better wish that day never comes. After all, to the Dothraki, a severed braid signals defeat.