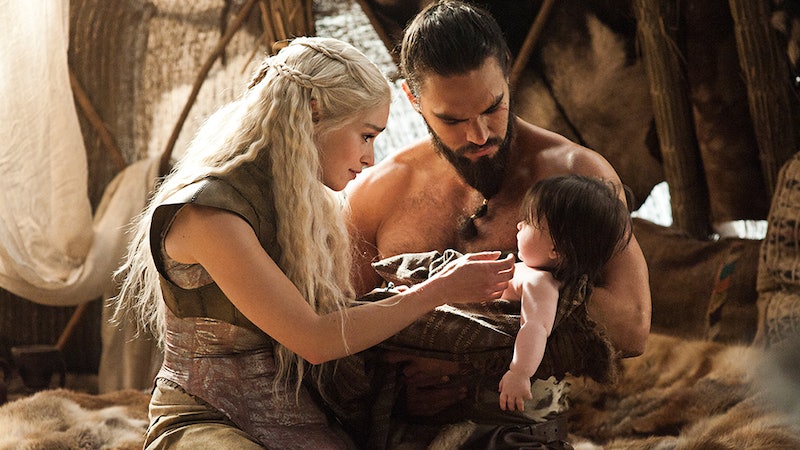 Yes, she is the Mother Of Dragons, but Daenerys can't have children and it's something she brings up often. It came up twice in the Season 7 episode "Beyond The Wall," first when Tyrion mentions she doesn't have an heir and when Dany shares this information with Jon Snow after her beloved dragon Viserion is killed by the Night King. "The dragons are my children," she explained. "They're the only children I'll ever have. Do you understand?" Game Of Thrones fans may not remember what she means, though, which is why it's worth looking back at the first season of Game Of Thrones.

In Season 1, a witch told Daenerys, who was pregnant with Khal Drogo's baby, that she couldn't have children. Dany took it to heart, but how reliable is this witch? As Refinery29 points out, it's the witch who said that she put a curse on Daenerys so that she would never be able to have human children, only dragon ones. Dany visits the maegi Mirri Maz Duur to help her heal her Khal Drogo, who was stabbed by his fellow Dothraki, Mago. But, the maegi double crosses her, swearing she'll bring Drogo back only to instead turn him into a vegetable as revenge for what the Khal did to her city. Her blood magic also results in the Khaleesi loses her unborn baby, which may or may not be a sacrifice.

On the show, Daenerys's son is lost, leaving her heartbroken, and she asks the maegi whether Drogo will ever be the same. "When the sun rises in the west and sets in the east," Mirri Maz Duur says. "When the seas go dry and mountains blow in the wind like leaves." But, in George R.R. Martin's book, The Song Of Ice and Fire, Mirri Maz Duur ended that statement with, "When your womb quickens again, and you bear a living child. Then, he will return, and not before."

What does this prophecy mean? No one really knows quite yet, but that hasn't stopped anyone from coming up with their own theories. Most of those theories deal with where Khaleesi needs to travel in order to bear a living child. The west could mean Westeros, while those mountains could be the ones beyond the Wall. Maybe Dany needs to take a page from Melisandre's book and travel to Asshai, the same ancient city where the Red Priestess gave birth to that shadow baby.

Since Dany was willing to share this information with Jon Snow, it seems he may be a vital part to understanding this prophecy. In "Beyond The Wall," Jon Snow tries to give Jorah Mormont his sword, Longclaw, back, but Jorah refuses, saying that Jon should have it to pass down to an heir. That could be a hint that Jon Snow could have a child before the series is through. Could it be with Dany? Could that child not only be the solution to the witch's prophecy, but also the answer to the Azor Ahai prophecy?

I know, I know, everything at this point is "the answer to the Azor Ahai prophecy." But there are some clues that actually support this notion, specifically that line in Mirri Maz Duur's prophecy: "Then he will return, and not before." If Dany is actually infertile and has a baby, it's a miracle — not unlike Azor Ahai returning.

The Azor Ahai prophecy states that the Prince Who Was Promised will kill the one he or she ("prince" in High Valyrian is actually gender neutral meaning it could also be the Princess That Was Promised) loves in order to create the Lightbringer sword that can take down the Night King and his armies. This could mean that Dany or Jon Snow is willing to sacrifice themselves for their little one and allow the other to become Azor Ahai. Jon Snow's goal is to take down the Night King, and, while Dany is hellbent on sitting on the throne, it's safe to say that she would throw that away to save the world for her newborn baby that she thought she could never have.

Or maybe this baby is actually the Prince That Was Promised. The fact that Tyrion is looking for Dany to have an heir and that Jorah has put the idea in Jon Snow's mind to have a child of his own could mean this child is special. This baby, this prince, could have been sent to save the Seven Kingdoms and could kill the one he or she loves for the good of others. This baby could kill its mom or dad to become Azor Ahai and save the world. But no pressure.