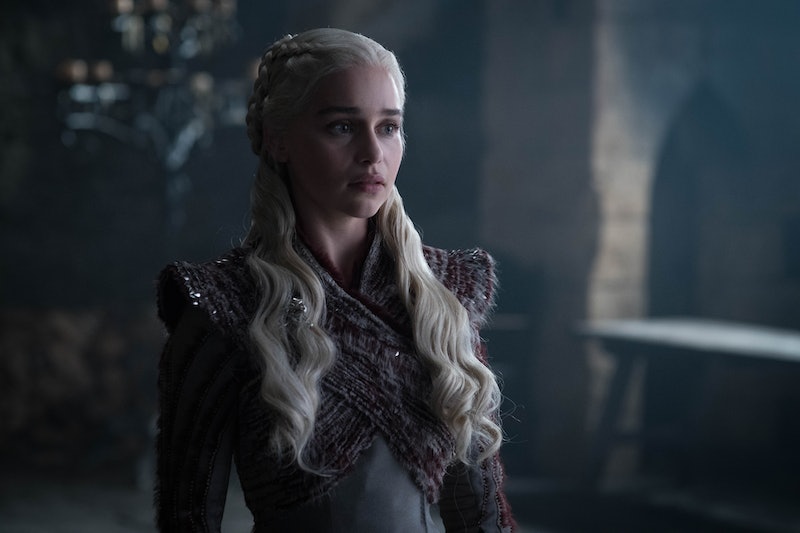 There are expected to be quite a few reunions during the eighth and final season of Game of Thrones. However, there will also be some characters that'll be meeting each other for the first time, the most anticipated one being between Sansa Stark and Daenerys Targaryen. But while this interaction is bound to feel a little tense, Emilia Clarke revealed during a recent interview with Entertainment Weekly that Dany meeting Sansa on Game of Thrones may end up feeling much more comical than fans expect it to be. In fact, she claims that this union parallels the Ben Stiller and Robert De Niro-led comedy, Meet the Parents, since it involves her character meeting the family of her new love interest, Jon Snow.

"I like to think that it's like Meet the Parents," Clarke told the outlet. "It’s like:'I hope they like me. This dude's wicked. It's a real good thing we got going on. He's the final piece. We're destined for greatness and world domination is a breath away.'" And that means getting on the good side of Jon's two sisters. Clarke added, "So I need to be like: ‘Can I braid your hair, Sansa? Little Arya, come over here, let's play some cricket.' So there's that. And then, very, very quickly, it’s like: 'Wait, is it just me, or do they hate me?'"

Of course, it's easy to see why Sansa would be skeptical of Dany right from the start. The Starks only just recently reclaimed Winterfell from the Boltons, so to learn that her brother and current King in the North, Jon, decided to bend the knee to a foreigner without consulting her is definitely not going to go over well. She's already having a difficult time with some of Jon's decisions as of late, which means Dany's presence could definitely put them at odds. But given Clarke's comments, it seems the Mother of Dragons will do whatever she can to win the eldest Stark daughter over. Perhaps a lie detector test would help matters?

In all seriousness, though, it'll be interesting to see what Sansa and Dany's conversations are like. And the good news is that viewers won't have to wait very long to see this all play out on-screen. According to EW, this Stark and Targaryen meet-up will take place right at the start of the very first episode. But Clarke assures fans that her queenly counterpart is more than up to the challenge of warming the northerners to her cause and that her romantic interest in Jon hasn't changed the strong, powerful ruler she's become. "The thing I now realize is she's not a scared little girl anymore," Clarke said during the same Entertainment Weekly interview. "So there's less room for vulnerability or sentimentality or soft edges."

As for whether or not Dany ends up winning over Sansa's allegiance when all is said and done remains to be seen, but if she was able to tame three fully grown dragons, odds are that a Stark alliance isn't completely out of the question.

More like this
Emilia Clarke Shares More Details About The New 'Game Of Thrones' Series
By Maxine Harrison
Twitter’s Reaction To HBO’s ‘Game Of Thrones’ Jon Snow Spinoff Idea Is Chaotic
By Stephanie Topacio Long
Emilia Clarke Remembers Her Broadway Debut As A “Catastrophic Failure”
By Stephanie Topacio Long
At 14, Jenny Han Wrote Rom-Coms About Her Friends & Fan Mail To Leo DiCaprio
By Alyssa Lapid
Get Even More From Bustle — Sign Up For The Newsletter