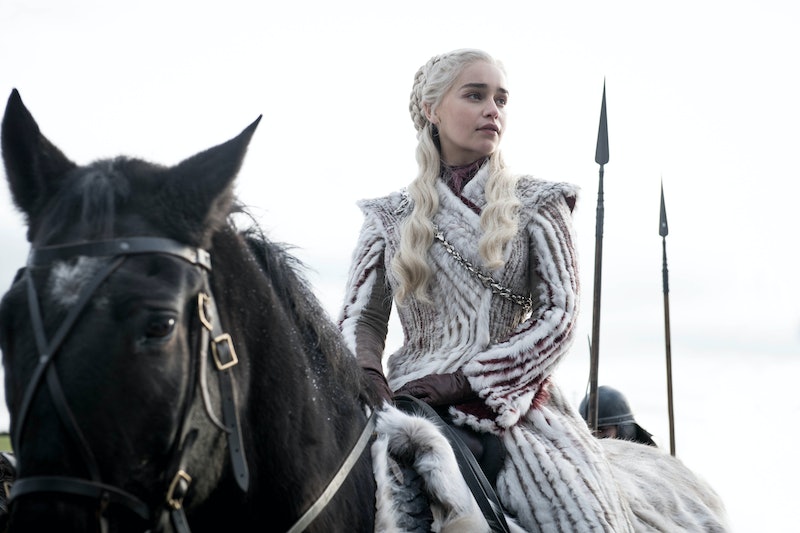 After seven seasons of drama and the deaths of way too many beloved characters, Season 8 of Game of Thrones is upon us, and there are so many loose ends to address before the end of the series. One of the biggest reveals is going to be figuring out who will end up on the Iron Throne in the end. That's what the game of thrones is all about, after all. And even though she's wanted to rule the Seven Kingdoms since the beginning, Emilia Clarke hinted that maybe Daenerys shouldn't end up on the Iron Throne after all, and it's an interesting take to say the least.

In a new interview with The New York Times, Clarke said that in a show revolving around control and one's leadership strength, there's a lot of sacrifices that have to be made in order to sit on the highest seat in the land: the Iron Throne. "The whole show is just a discussion on power," Clarke said in the interview. "Because the Iron Throne is representative of complete and consuming power and what that does to someone. It's fascinating, what I've found about the sacrifices that you make and what you get out of it as a result. Ultimately, if you get on the throne, what are you really getting?"

Daenerys' storyline began with her brother, Viserys, selling her off to marry Khal Drogo in order to gain access to the Dothraki army, in hopes to use them to get himself on the Iron Throne. The Targaryens think they have a rightful claim over that seat because their father, Aerys "The Mad King" Targaryen, was overthrown. To Daenerys, it's her birthright.

With that birthright of hers in mind, the Mother of Dragons has been through a lot and pushed herself to persevere to get to that ultimate goal of the Iron Throne. But as Clarke points out, it's not all it's cracked up to be and the losses people have experienced because of their fight to get there, or stay there, are hefty. "Cersei proves that you're not getting that much," she said. "You're getting a lot of loneliness, pain, critiques."

Cersei has lost all three of her kids, her brother-lover Jaime seems to have left her for good, and she had to go through a literal walk of shame in Season 5. She's on the throne for now, but she's gone through it to get there. Clarke definitely has a point, and maybe this is a hint that Daenerys sees this in the end (or suffers great turmoil, and maybe even death, this coming season because of this goal).

Also in the interview, Clarke talked about the more devious side fans have seen of Daenerys. "There's definitely a few Targaryen moments that she's had, for want of a better word," Clarke told the Times. "The Targaryen in her — the bad leadership decisions — make her sometimes go: 'I've got to have this power. I don't care who I'm controlling or what I have to do to get it, because it’s intoxicating.'"

Whatever is ahead for Daenerys Stormborn of House Targaryen, First of Her Name (etc.) will most likely be pretty epic. She's one of the viewers' favorites and her arc has really culminated in a way that a grand finale is to be expected — but Clarke's words seem to hint that the Dragon Queen may not achieve her ultimate goal after all, or if she does, it may not be all that she dreamed it would be.