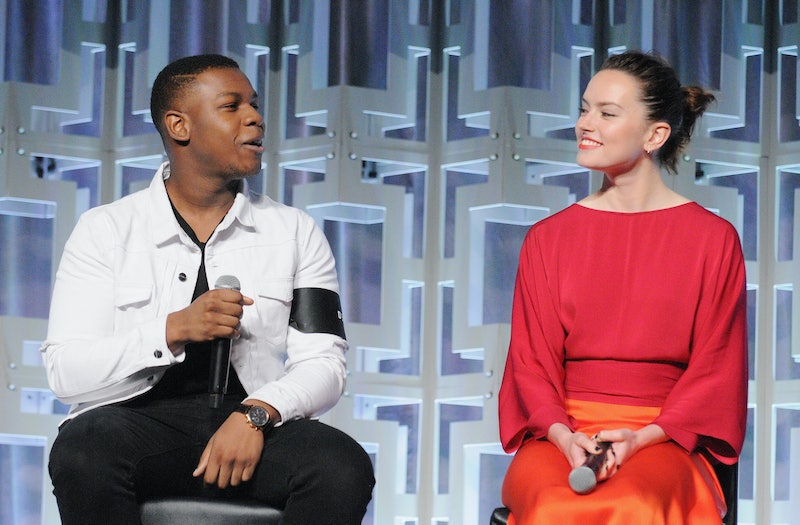 In the films (the most recent iteration of which, Star Wars: The Last Jedi, careened into theaters Dec. 15), Ridley and Boyega star as Rey and Finn, respectively. Even if only in a camaraderie sense, the pair's bonafide chemistry onscreen is tangible. And — as is the case with many fictional relationships that strike a particular chord with viewers — that's probably because it's real. During an April 2016 Facebook Q&A, Ridley confirmed that she does, in fact, think of Boyega like family:

"John [Boyega] is brilliant. He's like my brother... We get on so well. And we come from similar places because our families are very close and it's the main important thing in our lives... To have him there has just been brilliant."

And, if you've ever seen the two interact, Ridley's sentiments certainly don't come as any surprise. The duo's most recent display of heartwarming charm got some attention several weeks ago, after Boyega appeared as a guest on The Tonight Show Starring Jimmy Fallon on Nov. 29. After talking shop about the then-upcoming Star Wars movie, Fallon rolled a video in which Ridley challenged her co-star-turned-BFF to show off his dance moves.

"We have a question from a fan that we have videotaped," Fallon said, turning to Boyega. "I think her name is Daisy. Daisy, what's your question?"

"Please show Jimmy your breakout dance move of the wrap party," Ridley said slyly in the video. Boyega only had a moment to bury his head in his hands before the music started up. Unsurprisingly, given his talents as a performer, he rose to the occasion.

For all the die-hard Star Wars fans out there (and, if the box office numbers are any indication, there are many), Ridley and Boyega's sweet real-life friendship isn't exactly news. The 25-year-old actors (both of whom saw their respective breakout Hollywood successes with their leading Star Wars roles) have been engaging in conspicuously cute, high-profile antics for several years now. Standout moments include:

When They Wrote This Ridiculous Rap Song Just For Kicks

In April 2016, Ridley and Boyega revealed their joint hidden talent to Entertainment Tonight. In addition to their superstar acting chops, the pair also have a sense of rhythm. In between takes while filming on set, they tag-teamed to produce a hilarious, beat-box-infused, lyrical riot (or, as Boyega clarified, "We decided to collaborate on a song together"). Now that's friendship, y'all.

When They Giddily Revealed Their Pet Name For Each Other

In a December 2015 interview with Entertainment Tonight (ahead of the Star Wars: The Force Awakens opening), Ridley and Boyega — who were already beaming about their newfound friendship — revealed their sweet nicknames for one another. They call each other "peanut," which seems equal parts adorable and also probably sort of confusing.

In November 2015, before The Force Awakens even premiered, Boyega posted a series of Ridley's selfies to his Instagram account. You know the kind. The ones your best friend surreptitiously snaps using your iPhone's "live" photo setting while you weren't paying attention; the ones you save for that embarrassing b-day post you've been planning; the ones no one else is really supposed to see.

If Ridley and Boyega's perennially adorable — albeit, often at least moderately absurd — shenanigans don't scream "friends forever," I don't know what does. Here's to hoping their almost-siblingship continues going strong — mostly for their sakes. If Boyega's selfie post was any indication, there's probably a lot more potential blackmail where that came from.