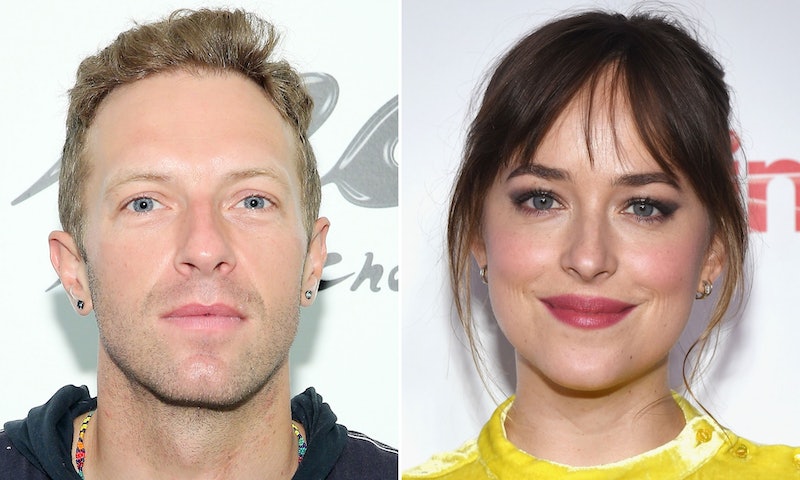 After much speculation and multiple dating reports, Dakota Johnson commented on Chris Martin for the first time. According to E! News, the Fifty Shades of Grey star opened up about her rumored romance with the Coldplay singer as the November cover star for Tatler magazine. Before you get too excited, Johnson kept her words to a minimum. That said, her response is so sweet you won't even care that she maintained an understandable level of privacy.

Per E! News, after Johnson was asked about her relationship with Martin, she replied,

"I'm not going to talk about it. But I am very happy."

Despite her super short answer, that's more than anyone really could've asked for. The Fifty Shades Freed actor didn't even have to comment, but she was kind enough to tell the world that she's "very happy," especially since they are extremely private about their relationship.

Johnson and Martin first made headlines in October 2017 after a source dished to People about the two grabbing dinner together in Los Angeles. One month later, Johnson was seen at a Coldplay concert in Argentina, which heated up dating rumors even more. Then, in December 2017, Us Weekly reported they were together romantically. (Bustle previoulsy reached out to reps for Johnson and Martin for comment, but did not receive an immediate response.)

"Dakota and Chris are definitely dating,” a sourced told Us Weekly at the time. "They’ve gotten to know each other really well and are very comfortable from one another. Chris sends Dakota his music to get her opinion. It’s more than just a fling."

They've been seen together a lot and even more recently, like when they were spotted holding hands in Malibu and when they went to a Radiohead concert together in Boston in July.

Before she even commented on Martin, Johnson's mom, Melanie Griffith, told People in May about the musician, "I adore him!" before adding, "But she is very private about her life and I respect that."

Believe it or not, but even Diane Keaton spoke about Johnson and Martin during a February appearance on The Ellen DeGeneres Show. She revealed the two were at Ellen DeGeneres' 60th birthday party together.

"I'm gonna talk about Chris Martin," Keaton declared. "He was with Dakota, right?" Then, she said to the audience. "They're a couple. Got it?"

Keaton didn't stop there and continued to gush over how attractive she finds the singer. "So, what I’m saying is, he’s gorgeous. That face got better with time." The Oscar-winner added, "I didn’t know who he was but I saw him and I noticed that he was gorgeous." When discussing Martin with Keaton, DeGeneres also made the following statement about Johnson: "She's with Chris."

Chances are another celebrity will comment on the celebrity couple before either Johnson says anything further or Martin officially makes a statement. Like Griffith said about her daughter, she's private about her personal life and understandably so. It seems like Martin is the same way. Whatever the case, at least fans can walk away knowing the two are "very happy." That's better than nothing, right?