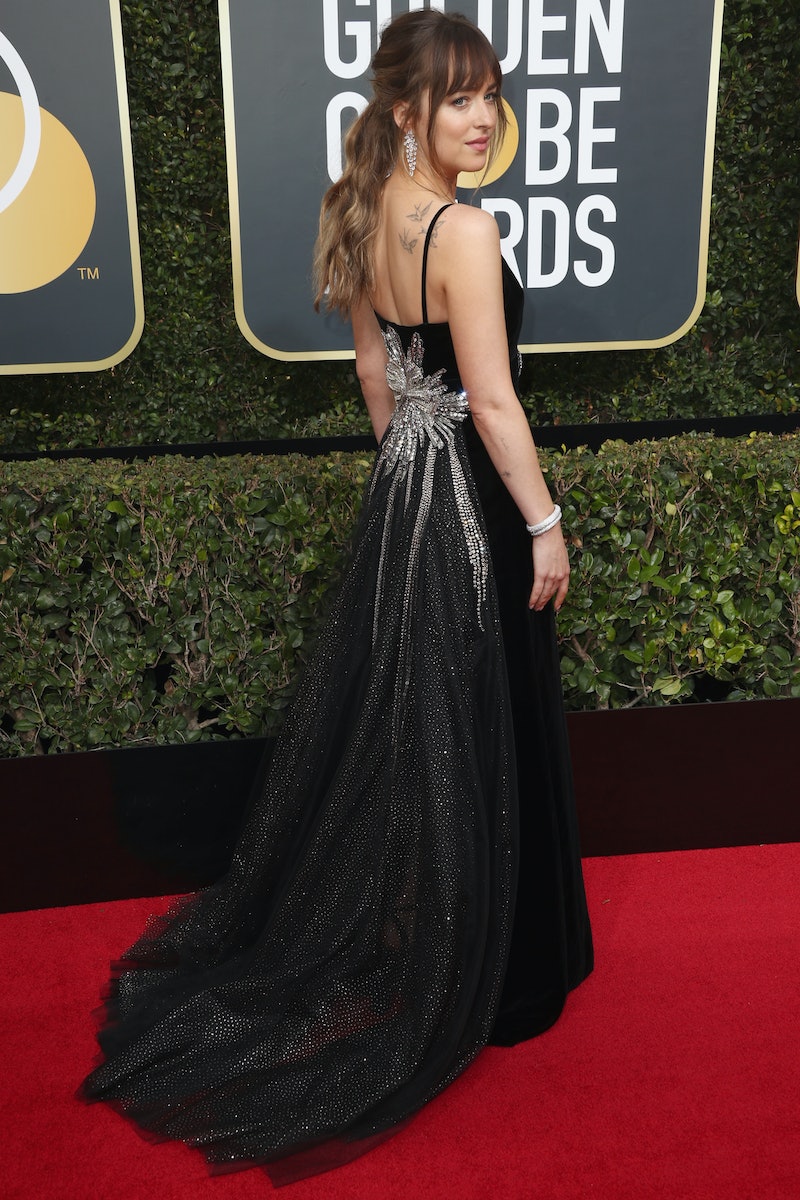 It's been three weeks since the Golden Globes, but the internet can't get over the amazing photo of Dakota Johnson side-eyeing Angelina Jolie while Jennifer Aniston was on stage. An unintentional move on Johnson's part, the snapshot became a viral obsession that everyone watching was relating to. Finally, Johnson attempted to explain the photo and what really happened, and although she doesn't really confirm if she was watching Jolie, she doesn't deny it either. Who wouldn't respond that way?

While the actor was visiting The Tonight Show Starring Jimmy Fallon on Monday night, Fallon presented her with the infamous photo and she began by laughing it off. When he stated the obvious, saying that Johnson looked like she was giving committed effort to watch Jolie's reaction from the corner of her eye, she said, "Yeah but so is Armie [Hammer]'s wife. I'm not the only one." To briefly take the attention off herself, she pointed to Elizabeth Chambers (who's also looking at Jolie in the photo). "Elizabeth is like very blatantly looking at her like, 'What is she gonna do?'" she continued. "And I was trying to be sly about it."

Success. Johnson was caught redhanded until their chat continued and she began changing her story.

Johnson then backed herself out of the corner saying that she was really just trying to stare at the Stranger Things kids, who she's as obsessed with as the next fan. (They were sitting in the total opposite direction of where her eyes were pointed towards Jolie, but that's OK. A for effort.)

"Truthfully, I don't think I was really actually looking at her 'cause if you look really closely at the angle of my eyes, they're kind of over here," she said while pointing her arm. When Fallon asked who she was looking at, she said "not sure" under her breath before pulling out the Stranger Things alibi. "I tried to send my friend [a video]... so I did that at the Golden Globes." She also wasn't holding a phone in the photo, but we'll let it slide.

Even if she used this as her excuse, at least she previously acknowledged the show-stopping moment between Aniston and Jolie and how it wasn't one to miss. She tried to watch without being obvious, didn't confirm nor deny being shady, went off the rails with an endearing excuse, and it's honestly all pretty relatable.

But no matter what explanation Johnson has up her sleeve, the internet will have that priceless photo for the rest of time.

When the photo was unearthed, audiences relished in its glory. Headlines like "Dakota Johnson Watching Angelina Jolie Ignore Jennifer Aniston Is All Of Us" emerged and people shared the screenshot with their own relatable captions. Because celebrity or not, everyone loves a bit of juicy drama when they see it.

Of course, the dramatic and very public love triangle between Jolie, Aniston, and Brad Pitt dates back to 2004. After being married for over four years, Pitt and Aniston divorced when he fell in love with Jolie on the set of Mr. & Mrs. Smith. Then, after over 13 years together, Jolie filed for divorce from Pitt (which hasn't moved forward). Meanwhile, Aniston had been happily married to actor Justin Theroux for two years at that point. Many people viewed the unfolding of events as some cosmic twist of karma, and needless to say, having both Aniston and Jolie in the same room (a room that's televised, nonetheless) is a rarity.

Watching Angelina Jolie and Jennifer Aniston present at the Golden Globes was not to be missed. Although Johnson whipped out a few excuses, the fact that she did it in the first place is still amazing.