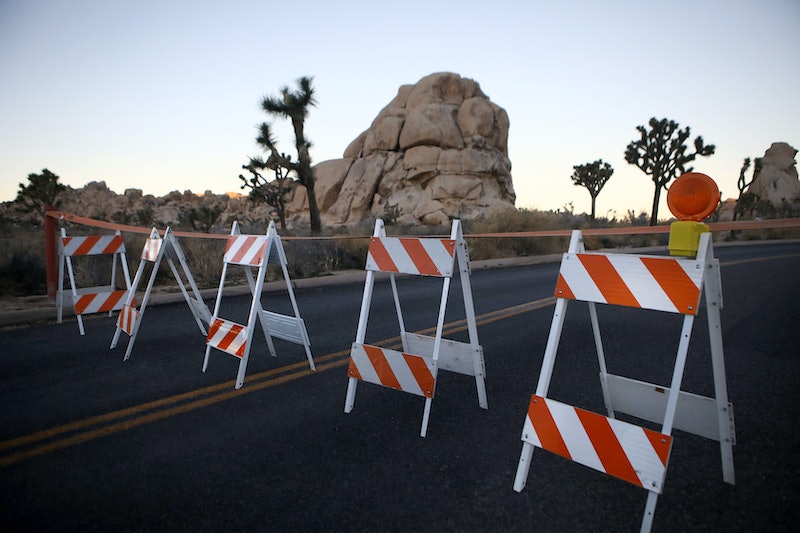 The government shutdown may be over for now, but the damage inflicted upon nationally protected land during that period might take centuries to undo. According to Curt Sauer, a former Superintendent for the park, the damage to Joshua Tree National Park during the shutdown has yielded "irreparable [harm] for the next 200 to 300 years," The Cut reports. This damage is largely due to human recklessness, he explained, due to how understaffed the park was during the shutdown.

According to The Huffington Post, only eight park rangers were on hand during the majority of the shutdown, and these rangers were tasked with keeping an eye on the 790,636 acres of land within the park. The Cut notes that many people who visited the area during the shutdown proceeded to start campfires in illegal areas, graffiti rocks, cut down trees, and drive around on forbidden off-road areas.

During a rally last Saturday at the park, John Lauretig, the executive director of the Friends of Joshua Tree, said via Palm Springs' Desert Sun,

Joshua Tree National Park was so heavily desecrated during the weeks of the shutdown that it was temporarily closed on Jan. 10 so that staff members could address the damage and sanitation issues that arose over the holidays. In a statement released on Jan. 8, spokesman George Land said,

While the vast majority of those who visit Joshua Tree National Park do so in a responsible manner, there have been incidents of new roads being created by motorists and the destruction of Joshua trees in recent days that have precipitated the closure. Law enforcement rangers will continue to patrol the park and enforce the closure until park staff complete the necessary cleanup and park protection measures.

Land added, "The communities near Joshua Tree National Park have provided significant assistance and support to the park, and park officials hope to restore visitor access to the park as quickly as possible to mitigate any negative impact to the local economy."

To The New York Times earlier this month, Casey Schreiner, the editor in chief of Modern Hiker, explained that Joshua Tree might seem like a rugged and strong landscape, but it's actually quite fragile.

Schreiner said, "If you’re not a desert person, you don’t understand how fragile these environments are. They look like they’re built to take a beating.”

He continued, "[Desert flora] can take literally thousands of years to form and can be crushed with a single footprint.”

As of Monday, Jan. 28, Joshua Tree is now open to the public again, though workers are not finished with the clean-up process, according to The Guardian. To learn more about how you can contribute to the restoration of the national park, you can contact the Joshua Tree National Park Association to get information about donations and volunteer availability.