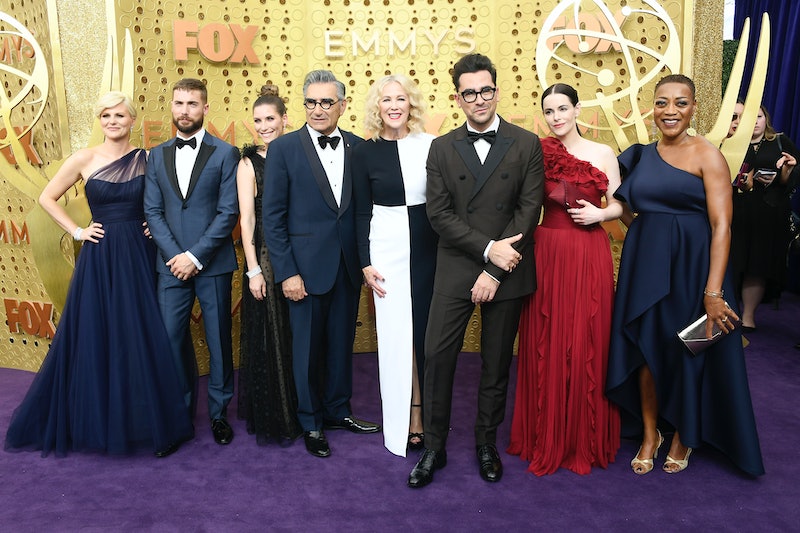 Dan Levy's dark brown tux may have been a little too tame for David Rose's taste, but he did include a special homage to his Schitt's Creek character at the 2019 Emmys. As fans were quick to point out on Twitter, Levy wore David's engagement rings from the show, which Patrick (Noah Reid) proposed with in Season 5. Though Levy wore them on his right hand, the rings are quite distinctive — four thick, solid gold bands — which made them easy to spot.

Levy hasn't yet mentioned his decision to wear the rings on social media, and he didn't say anything about them in his E! pre-show interview on the purple carpet, either. But he did post a picture with Reid and his dad (and Schitt's Creek co-star) Eugene Levy from Showtime's Emmys party on Instagram. "Three Canadians walk into an Emmys party..." he joked in the caption.

Besides, viewers were more than emotional enough on his behalf. "Dan is wearing David Rose's [engagement rings]. I can no longer tweet because I have died," tweeted one fan.

Added another: "Things I cannot handle: @danjlevy keeping and wearing David's [engagement rings]. To the Emmys. It's just too much."

Levy also wasn't the only one channeling his Schitt's Creek character on Sunday night. Catherine O'Hara, who plays Moira Rose, wore a geometric black-and-white gown perfectly in line with Moira's signature color palette. All that was missing was one of her trademark wigs. And it makes sense that O'Hara chose to honor Moira — awards season is her favorite season, after all. Levy's nod to David was just an added surprise.

With only one final season left to go, it would be a delightful bookend for Schitt's Creek to get the awards recognition it's long deserved and take home a few wins. Yes, it still has next year, but by that time the series finale will have come and passed. Just ahead of the Emmys, Pop TV announced the premiere date for Schitt's Creek's sixth and final season: it will return for 14 episodes beginning Tuesday, Jan. 7 at 9 p.m. ET. Which, uh, is pretty soon.

No one is ready for the show to be over — including Levy himself — but fingers crossed that by the time the final credits roll, it will have a few Emmys to cushion the blow. And hopefully Levy will have David's engagement rings to commemorate the magical gem of a show he created.