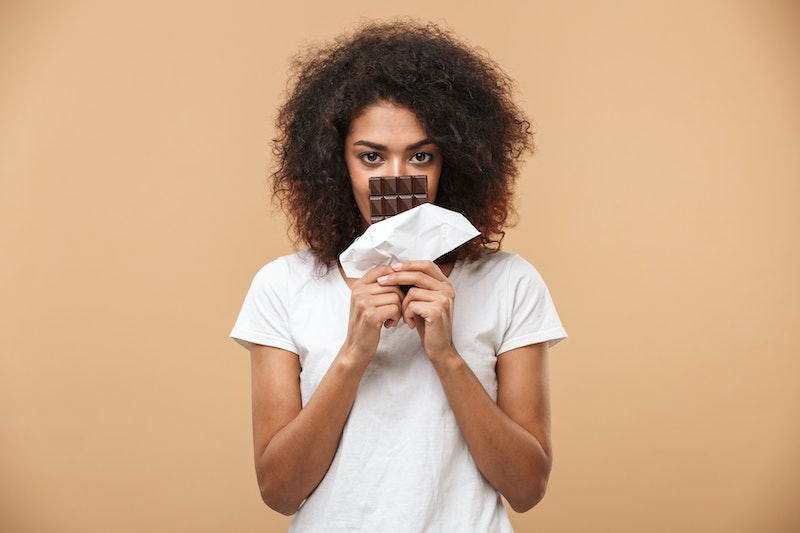 I know, I know — we’re so used to seeing research claiming that chocolate is “good for us” that it hardly feels like news anymore each time a new one comes out. But this one is worth checking out: According to two new studies, dark chocolate can reduce stress and improve your memory — and notably, this research didn’t find the results to correlate with the sugar content of chocolate. It focused specifically on the concentration of cacao, with the researchers noting that the results are quite encouraging, indeed.

We’ve long known that cacao is a potent source of flavonoids, which LiveScience describes as a type of phytonutrient contained within most fruits and vegetables. As antioxidants, flavonoids have an anti-inflammatory effect on the human body, bringing with it a sizeable set of benefits for our immune systems; indeed, flavonoid-rich diets are associated with the prevention of cancer and neurodegenerative and cardiovascular diseases. And with cacao containing the amount of flavonoids that it does… well, you can see how previous research would have drawn a line between chocolate consumption and these health benefits.

The current research, which was presented at the Experimental Biology 2018 meeting in San Diego, Calif. this week, is notable for being “the first time that we have looked at the impact of large amounts of cacao in doses as small as a regular sized chocolate bar in humans over short or long periods of time,” as principal investigator Lee S. Berk of the School of Allied Health Professions and Loma Linda University put it according to Science Daily. Previously, noted Berk, “we have looked at the influence of dark chocolate on neurological functions from the standpoint of sugar content” — that is, “the more sugar [there is], the happier we are.” The current findings, however, show that it’s not just the sugar in chocolate that’s at play here: Said Berk, “These studies show us that the higher the concentration of cacao, the more positive the impact on cognition, memory, mood, immunity, and other beneficial effects.”

According to the findings, the chocolate you consume needs to have a cacao percentage of at least 70 percent in order for the benefits to come through. In the first study, cacao consumption at this percentage was found to “[up-regulate] multiple intracellular signaling pathways involved in T-cell activation, cellular immune response, and genes involved in neural signaling sensory perception.” Meanwhile, the second study found that 70 percent cacao “enhances neuroplasticity for behavioral and brain benefits” All in all, the results suggest that consuming 70 percent cacao on a regular basis can boost your immune system, improve your memory, and reduce your stress levels.

Of course, as Vox noted in October, an awful lot of chocolate research has actually been funded by chocolate companies, so the health benefits of the sweet may very well have been pushed and overinflated over the years. Even if the flavonoids contained within cacao can have some positive effects on certain systems in the human body, chocolate is still candy, so calling it “healthy” is perhaps not the best way to frame it. That doesn’t mean that legitimate research into what Vox calls “high-quality cocoa science” isn’t worthwhile; on the contrary. As Harvard nutrition research JoAnn Manson told the outlet, “[Cocoa] has looked promising in small-scale randomized controlled trials and in observational studies, so it’s worth moving now to more conclusive and large-scale randomized controlled trials.” But even as this research is performed, it’s still worth taking the body of knowledge with a grain of salt.

Additionally, the quality of the chocolate in question matters. As chocolatier Jacques Torres told CNBC’s “On the Money” in March of 2018, “Dark chocolate can be good for you, and when I say ‘can,’ it’s about what type of dark chocolates you are eating.” Chocolate with a high percentage of cacao — at least 50, but closet to 70, as the current research underlines — and a low concentration of sugar is your best bet for reaping the health benefits.

But, hey, you know what? It’s A-OK if you don’t even care about the potential health benefits of chocolate. If you just like to eat it because it’s a tasty treat, go forth. Do you. Live that chocolate life.

More like this
On TikTok, Tinned Fish Date Night Is The Latest Viral Food Obsession
By Emma Carey
10 Pumpkin Recipes That Are Way More Creative Than Pie & Lattes
By Rebecca Deczynski and Alexis Morillo
This Psychological Effect Might Be Keeping You From Hitting Your Goals
By Lexi Inks
UK Audiences Will Soon Be Able To Watch 'The Bear'
By Frances Stewart
Get Even More From Bustle — Sign Up For The Newsletter