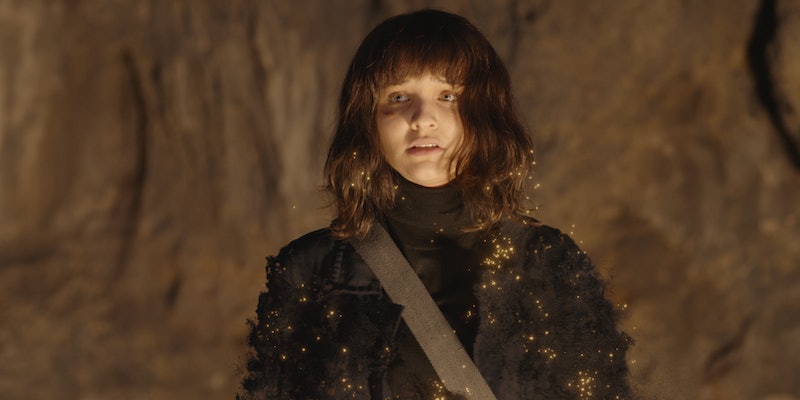 Spoilers ahead for the series finale of Dark. Netflix's most complicated family drama has come to a close, and for the most part, the Dark series finale tied up the loose threads left from previous seasons. In the series' final episode, Jonas and alternate world Martha travel to a newly revealed third dimension: the origin world, where H.G. Tannhaus first activated the machine that created Jonas and Martha's two knotted realities. By saving Tannhaus' family from a fatal car crash, the two are able to stop the string of events that led to Tannhaus creating the time machine and thus spawning their endless loop. That leads Martha, Jonas, and all their descendants to fade from existence, just whispers in the wind.

Does H.G. Tannhaus ever learn about time travel in the "real" world?

After H.G. Tannhaus' son, daughter-in-law, and infant granddaughter die, Tannhaus builds a device that ends up splitting his own world into two. But the creation of the device is only possible through the loop: old Claudia gives a young Tannhaus the blueprints, and he perfects the design using 2019 Ulrich's cellphone and a cesium isotope from 2019 Jonas.

The implication is that time travel would never have existed if not for, well, time travel. But is it believable that, if his loved ones never die in the origin world, Tannhaus never tinkers around on a new machine for any other reason, given his scientific interest in wormholes?

Why does Jonas and Mirror Martha's son travel in threes?

The main antagonist of Season 3 at first appears to be an unnamed man with a cleft lip scar, who can be seen traveling through time and mysteriously killing people. It's later revealed that he's the son of Adam and Eva (aka Jonas and Mirror world Martha) but it's never actually explained why he travels with a young, middle-aged, and old version of himself. Was it simply for the creepiness factor?

What happened to Wöller's eye?

Ultimately it's a minor detail, but we never learn how Wöller lost his eye. In the final origin world scenes he still sports the scars, and even begins to explain how it happened, but is cut off by a crash of lightning. Perhaps the scene is a winking nod from the creators to fans' pleas for answers to every single mystery (yet here we are!).

One of the more noticeable hanging threads is the origin story of Regina's husband Aleksander Tiedemann, aka Boris Niewald. It's implied that he committed a murder and changed his name before suddenly appearing in Winden in 1986 and later becoming head of operations at the plant. The murder case is never solved on screen, and it's only implied he killed Inspector Clausen's brother and assumed his identity. (We also don't learn much about Clausen, for that matter.)

Boris' last name is "Niewald," a combination of the family names Nielsen and Kahnwald, which fueled fan theories about the possible significance of his backstory. In a story about intertwined families, was that name really just a red herring?

How did the Stranger become Adam?

We know that one version of Jonas eventually turns into the Stranger and then into Adam, who goes on to lead the nihilistic cult Sic Mundus. But how did the generally good-natured the Stranger become the world-weary Adam? Though we see the Stranger grow increasingly frustrated trying to create a time machine in the 1880s and early 1900s, we don't ever see a definitive moment where he breaks bad, nor do we learn if there was a specific moment he decided to change his name.

Apparently grief and time travel run in the Tannhaus family. H.G. Tannhaus' grandfather is Gustav Tannhaus, the blind man seen in flashbacks. When Gustav's mother Charlotte died, his dad, Heinrich Tannhaus, became obsessed with bringing her back. Heinrich founded Sic Mundus, but failed to figure out how to resurrect her. Gustav continued Heinrich's work, and in 1888, he meets adult Jonas, Magnus, Franziska, and Bartosz from 2020. Gustav learns time travel exists from Jonas, but then the unnamed son of Eva kills Gustav before he can tell anyone else. We don't know much about Tannhaus' descendants beyond that. Were they even making headway on time travel technology before Jonas appeared to confirm it was possible, and did Tannhaus' interest in clocks and time stem from his lineage?

What happened to Adam's face?

While other characters note that time traveling has "taken a toll" on Adam, Claudia's is not similarly scarred, despite having traveled the loop countless times to figure out the existence of the origin world. So what really caused the scars? Was it exposure to radioactivity after the nuclear blast (which seemed to similarly scar Adult Elisabeth)? Or, like the trio with the cleft lip scar, is Adam's face simply for ominous effect?

Did Jonas and Mirror Martha actually break the loop?

In the end, Jonas and Martha undo the knot between their worlds, but some users on the Dark Reddit page believe that in doing so they simply created another larger loop that will play out with different characters. Though it's clear Jonas, Martha, and the rest don't exist in the real world in the end, Dark seemingly leaves a door open for a potential new time wrinkle. Despite Jonas and Martha's worlds no longer existing, the origin world Hannah somehow dreams of them, and as if struck by inspiration, decides to name her unborn child Jonas. Is that final line meant to imply that their world is now running on its own loop, or is it just one last cheeky reference from the creators? We may never know.