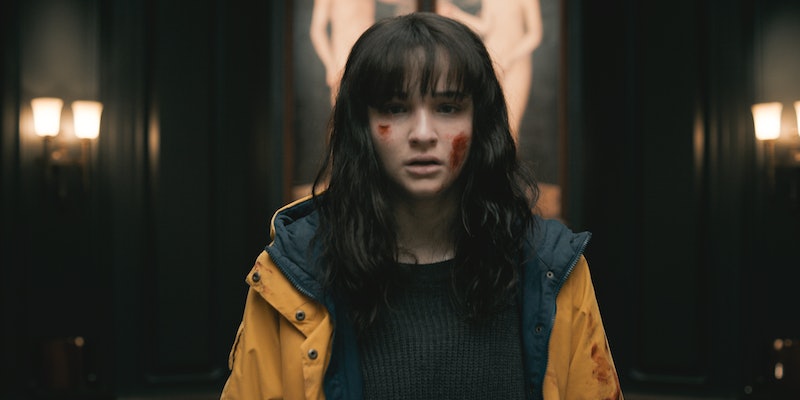 This goes without saying, but spoilers ahead for Dark Season 3! The cycle has ended. The knot has been untied. The world has been destroyed… and also saved. The Dark Season 3 finale ending may have left your brain feeling as tangled as the Winden family tree — but sketching intertwining diagrams of family members and puzzling out the story's twisted chronology has become a pastime for Dark fans. And now that the epic saga has come to its conclusion, it's time to fit the pieces of the puzzle together one last time.

For years, young Jonas Kahnwald has tried to figure out how to break the loop that leads to nuclear apocalypse, guided and thwarted and manipulated along the way by time travelers with their own agendas like Adam (his older self) on one side, Eva (an alternate world version of Martha Nielsen's older self) on the other, and the White Devil (Claudia Tiedemann's older self) somewhere in the middle. In Dark Season 2, Jonas was convinced that the way to save Winden (and the world) was to erase his own existence by stopping his father from going back in time. But the introduction of a mirror world in Season 3 — one in which Jonas never existed but Winden was ultimately destroyed in a nuclear apocalypse anyway — proved that the solution was tied to something bigger than his own fate.

So what was the solution to untying the knot? Did Jonas manage to save the world? What exactly happened in those final moments? Let's break it down.

Even though there is only one world with a Jonas in it, it's revealed partway through the season that there are somehow two Jonases. The Jonas viewers have been following since the beginning of the series is actually killed by Mirror Martha shortly after arriving in the Mirror world and conceiving a child with Mirror Martha's younger self. Adult Jonas and Adam were not actually older versions of the Jonas viewers knew this whole time, but rather older versions of a Jonas who was never taken to the Mirror world at all. That Jonas rode out the apocalypse in his basement and stayed in the Prime world his whole life.

How do both of these Jonases exist? It turns out that, at the moment of the apocalypse, time stood still for a fraction of a second. Eva (Adam's counterpart, the oldest version of Mirror Martha) took advantage of this instant in which the rules of time did not apply to create two versions of events: one in which Jonas traveled to the Mirror world and one in which he did not.

2. The Center Of The Knot

Season 3 largely revolves around the search for the center of the knot, the one moment or person from which the tangled web of Winden is born, and the point at which it can be undone. Adam believes that the origin is the son of Prime Jonas and Mirror Martha — a child of two worlds, who is the root of the Winden family tree in both universes, having fathered Tronte Nielsen with both versions of Agnes. Adam is convinced that, if this child is destroyed, the knot will be untied.

Being a child of both worlds, it can only be destroyed by the combined force of both worlds; so Adam ties up a pregnant Martha underneath a wormhole that channels the energy from the simultaneous apocalypses in both worlds. When this energy is unleashed, Martha and the child inside her are both obliterated… but nothing changes. Winden is still there, and Adam is confounded.

It turns out that, just like there were two Prime Jonases this whole time, there were always two Mirror Marthas as well. The one who saved Jonas and took him to her world is the one who was killed by Adam along with her unborn child. But this is always what happened, so Adam killing her changed nothing. There was a second Martha all along, created at the moment when time stood still, who never saved Jonas. Instead, she returned to Eva, was given her trademark facial scar by her older self, and became the Martha who killed Jonas in front of her other self.

So if the child inside Martha wasn't the origin, what was? Claudia explains the truth to Adam: there weren't just two worlds… there were three. The Prime world and the Mirror world were both offshoots of the "Real" world; both were created by H.G. Tannhaus when he turned on a time machine he had built in an attempt to save his family from dying in a car accident. The time machine triggered an apocalypse in his own world, but also gave birth to the two other dimensions at the same time.

Realizing the error of his ways, Adam uses the moment when time stands still to create a third Jonas in addition to the one who was taken to the Mirror world by Martha and the one who would stay in the Prime world to become Adam. Following Adam's instructions, this third Jonas intercepts Martha at the moment Magnus and Franziska take her to the Prime world to save Jonas, and instead takes her to the "Real" world.

There, Jonas and Martha go to the road where Tannhaus' son, daughter-in-law, and infant granddaughter would be killed, and prevent that universe-altering tragedy. Instead of dying, the family returns to Tannhaus' house. The moment that saved the world from nuclear apocalypse wasn't a loud machine that destroyed a life, but rather a quiet moment that saved a life and healed a broken relationship.

As Tannhaus reunites with his family, Jonas and Martha — and everyone in both of their universes who is inextricably linked to time travel — fades quietly away, dissolving into dust that scatters like stars.

Dark ends on a bittersweet note. Practically every character viewers have come to know over the past three seasons has been erased from existence — but the world has been saved in the process, and the survivors get to live on, unaware of the apocalypse that nearly wiped them out. The only people who remain in the Winden of the "Real" world are those not tied up in the knot started by the child of Jonas and Martha. The final scene features the six of them sitting around a dinner table together enjoying a friendly and intimate meal: Regina, Katharina, Hannah and her partner Wöller, and Peter and his partner Bernadette (Wöller's sister).

But how unaware are they, really? As the lights flicker out, Hannah recounts a dream she had: one in which the world ended, and she had the sense that it was a good thing. As they raise a toast to "a world without Winden," the lights come back on. When asked what Hannah and Wöller are planning on naming their unborn child, Hannah answers, seeming struck by sudden inspiration: "I think Jonas is a beautiful name."