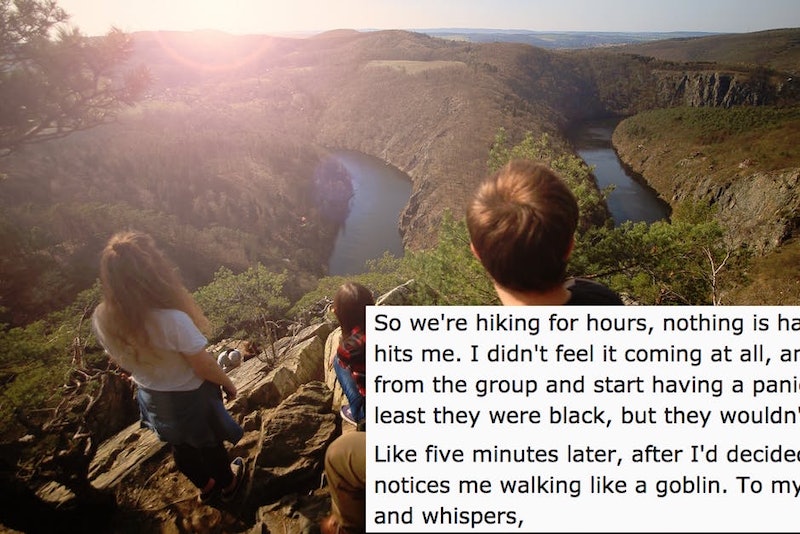 Fun fact: I may have just heard tell of my future husband on a Reddit message board? Less fun fact: I'm going to have to engage in a literal Hunger Games of other fans that have now racked up over 14,000 comments about him over the last 24 hours. I almost hesitate to share with you this woman's epic tale of Dave the Period Fairy for fear of adding more competition into the mix, but y'know, may the odds be ever in all of our respective favor. And hey, maybe the mere existence of Dave the Period Fairy will inspire a whole new movement of period fairies and we can all live in relative, menstrually sound peace.

The legend of Dave the Period Fairy begins on the Reddit message board Two X Chromosomes, wherein the storyteller, user I_Removed_Something, who refers to herself as "Jane," talks about going on a hike with her three male friends, Dave, John, and Teddy.

So we're hiking for hours, nothing is happening, then about twenty minutes from the end of the trail, it hits me. I didn't feel it coming at all, and it's like four days early. I immediately slink back like 20 feet from the group and start having a panic attack. I had NOTHING on me and I was wearing shorts. At least they were black, but they wouldn't hold much. I'd also 100% bleed up the Uber.

Like five minutes later, after I'd decided on stuffing my bra down my shorts, Dave looks back and notices me walking like a goblin. To my horror, he falls back and starts walking next to me. He leans in and whispers,

I'm like, huh? Then I realized I'm like doubled over with my hands on my crotch. Seemed obvious.

"Period issue?" he says next.

At that point I'm like this and I just mumble "yeah."

And then, this guy, this fucking glorious, magnificent guy, he calls out to John and Teddy: "Hey, Jane's scraped her arm on a tree or some shit, I'm gonna tend to it but it's gonna be like five minutes. Just get to the road and set up lunch and call the car."

John says sure and the two of them keep on walking. Dave slides off his magical backpack and opens a pouch on the front of it. "Pads or tampons?" he says.

I mutter "tampons," completely stunned at all this. He pulls out three tampons, the good kind, and a handful of wet-naps. Hands them to me and then he opens the main compartment and pulls out a long sleeve black t-shirt. "Go in the trees and take care of it, then tie the shirt around your waist." He then pulls out a big band-aid and slaps it on my arm to keep up his cover story.

I ask him why he had these, he's just like, "I've been hiking with women for years, you think I'm stupid?"

Personally, I am the one who is stupid — stupid in love with Jane's friend Dave, that is.

It isn't just Dave's unexpectedly feminist Boy Scout preparedness, but that this is the kind of thing that normalizes periods in general. All too often, the burden of lifting the stigma on menstruation falls on women; whether they're getting banned on Instagram for showing photos with period blood or fighting off trolls after being photographed openly bleeding during a race, it's up to women to be out there fighting the good fight. Periods are an entirely natural phenomenon, happen to approximately half of the population at some point in their lives, and are, y'know, the byproduct of the essential biological systems that perpetuate the human race — yet the shame culture surrounding them is so, so real. It is refreshing to see a man (specifically my husband, Dave) not only not batting an eye, but actively supporting a woman in a way that that indicates there was no reason to feel that internalized shame in the first place.

Guys, we all slept on 14,000 people discovering Dave before we did; maybe it's time to throw in the towel and hope that he leaves more Dave the Period Fairies in his wake. In fact, it seems he already has: "Hi there, quick query, what are the 'good kind' of tampons and are there good kinds of pads?" asked one male commenter. "You know. So I can Dave in the future."

(Side note: You know you're doing good things with your life when your fake name becomes a verb.)

As for whether Jane's period will bring them together for the ultimate love match? Jane responded to a comment that seemed to indicate that it would not be since they're pretty different, alas. But hey — more Dave for us. In the meantime, I'm siding with the commenter who thought of an excellent way to thank him: "Maybe just bake him/buy him a cake with icing that says 'Number 1 Hiking Partner. Period.'"

Gotta love a good pun. Of course, not nearly as much as I love Dave the Period Fairy, forever and always, amen.