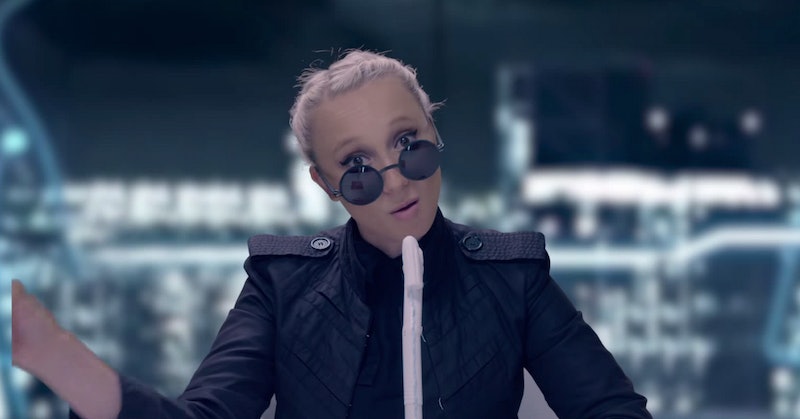 First and foremost, I would like to take this opportunity to apologize to my uterus. Enough people who period-shame exist in this world already; you didn't deserve all the extra flack I gave you on top of it, dear uterine organ. I mean, yeah. You do occasionally get a little painfully enthusiastic about that whole shedding of your lining business. But hey, I basically blackout emotionally at Taylor Swift concerts — we've all got our weaknesses. What I'm trying to say is, although I complain to you and about you on the reg, I recognize that you are a pretty badass organ — not only for being one of the strongest muscles in the human body, but for, y'know, housing and creating all human life and bearing the responsibility for perpetuating our species. NBD.

As much as we are indebted to these uteruses, though, they are somehow subject to huge amounts of scrutiny when it comes to periods. Periods are just one more thing that are weirdly censored in our culture, like the nipples of one particular gender, or the ability to breastfeed babies in public without the half the damn world losing its mind. I've run out of ways to express my frustration with this — the sexualization of women's breasts is so out of control that apparently we can't even use them for the purpose they were designed for. And silencing and shaming women about their periods is really no different, considering it is yet another part of the ~circle of life~ that brought even the period-shamers here in the first place. Like, are you really going to sit around and call us gross for talking about or visibly having our periods when that same gook was the kind that cushioned you in the damn womb for nine months? Are we really going to be this whiny and immature about something that half of the population endures on a regular basis?

I mean, yes. We are. We have. We continue to, because society as a whole cannot wrap its brain around the fact that shaming periods is basically the equivalent of shaming women for existing in the first place. We've got miles and miles to go on this front, but there are some kickass women who are taking a stand in the best way. Here are some ladies who have used their periods to make powerful statements about the absurdity of period-shaming:

Back in March, the artists caused a stir when their photo series, meant to demystify periods, was taken down from Instagram for violating guidelines two separate times — despite the fact that there were no written guidelines that they violated. In an open letter to Instagram, Rupi wrote,

Thank you Instagram for providing me with the exact response my work was created to critique. You deleted my photo twice stating that it goes against community guidelines. I will not apologize for not feeding the ego and pride of misogynist society that will have my body in an underwear but not be okay with a small leak. When your pages are filled with countless photos/accounts where women (so many who are underage) are objectified, pornified. and treated less than human. thank you.

The story quickly went viral and, in a surprisingly pleasant twist, managed to give the photos even more of a platform for an open dialogue about normalizing menstruation.

When the runner woke up the day of the race she had spent months training for with her period, she opted not to drop out of the race, but instead to bleed freely during the marathon. She ran all 26.2 miles with period blood visible between her legs, and the pictures sparked a huge debate in whether or not it's "acceptable" for women to be visibly bleeding in public, yet again providing an amazing platform for people to discuss the blatant shaming of periods.

When Amber Gordon Got The #PeriodsAreNotAnInsult Hashtag Trending

After the GOP debate, Donald Trump infamously said about moderator Megyn Kelly of Fox News, "You could see there was blood coming out of her eyes. Blood coming out of her wherever." Justice was swift and hashtagged, because soon #PeriodsAreNotAnInsult was blasting through Twitter after a call to arms from Amber Gordon of Femsplain. Women live-tweeting their periods to Trump has been a delightful side effect to this trend, but overall it spoke multitudes to the absurdity that a woman's behavior could be reduced to her menstrual cycle.

The comedians used the hit song as a vehicle to protest the tampon tax in the UK, where the European Union is still classifying women's menstrual products as "nonessential items". Their pun game was too fierce for this world, but their message was even fiercer: tampons are not a luxury item, the same way having a period isn't optional for women (without paying for very specific procedures or birth control, that is).

"This is a long-standing campaign. I have had a look at it in the past. It's quite difficult," Prime Minister David Cameron said to a student in February. "Some VAT [value-added tax] things you can change. Other VAT things, if they're linked to other products, it's quite difficult to do it within the framework of European laws and I can't remember the answer."

Hopefully the strong actions of women like Cariad, Jenny, Amber, Prabh, Ruba, and Kiran will help everyone ~remember~ soon. It's time to demystify the menstruation once and for all, and these women are all helping make it happen — one period at a time.