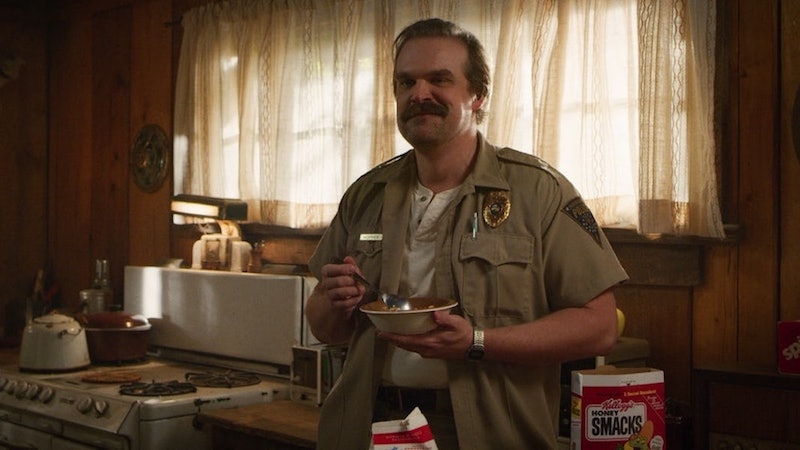 Jim Hopper’s real-life counterpart doesn't know what to think about his character's fate. Stranger Things’ David Harbour isn’t convinced Hopper is "the American" in the Season 3 finale anymore. The Netflix series last left off with the assumption that the beloved police chief of Hawkins, Indiana (Harbour) died in the blast at the underground Russian facility after Joyce (Winona Ryder) closed the portal to the Upside Down. In a post-credits scene, however, it's revealed that an undisclosed American is being held in a cell in Russia. Since Hopper’s body was never shown post-blast, some fans theorized that Hopper is the American. It’s a theory Harbour believed, too — but now, he isn’t too sure.

“[Creators Ross and Matt Duffer] told me the arc of the season, and then I think we got Episode 8 like a couple months before we shot it,” Harbour told TheWrap on Friday. “And I remember reading that episode, and they hadn’t told me this whole thing about this Russian facility at the end and how that was gonna be the sort of teaser and like ‘the American’ and the Demogorgon.”

He continued, “And I really thought I was the American, and then I haven’t heard a lot from them. So I really don’t know if I am. But I thought I was, but it was never discussed. I didn’t ask [the Duffers] ’cause I felt confident I was — and now I’m not so confident.”

While the fate of Hopper is unknown, Harbour expressed an interest in resurrecting the fan-favorite role. “My hope is the same as yours,” he said. “My hope is that there is some sort of resurrection, but I don’t know. I know they haven’t gone into production yet.” While Stranger Things was renewed for Season 4, Netflix has yet to announce a premiere date.

As for the identity of the elusive American, fans have also theorized that none other than Dr. Brenner (formerly known as “papa” to Eleven) is the hostage. While Brenner was attacked by a Demogorgon in Season 1, his death was never made explicitly clear. And, in an interview with Collider in 2017, director Shawn Levy confirmed that Brenner was, in fact, still “alive” and “out there.”

So, what could this mean for Hopper's fate? While there have been various theories that point to Hopper being alive, Harbour is very much curious about his fate, too. During an appearance on Late Night with Seth Meyers last October, Harbour FaceTimed the Duffer brothers to ask whether or not his character was dead. “I mean, we’re still figuring it out,” the brothers said. “You guys are a ton of help, thanks,” Harbour replied. “Really wonderful work. Good luck with Season 4.”

For now, it appears fans will just have to wait for Stranger Things Season 4 for definitive answers.