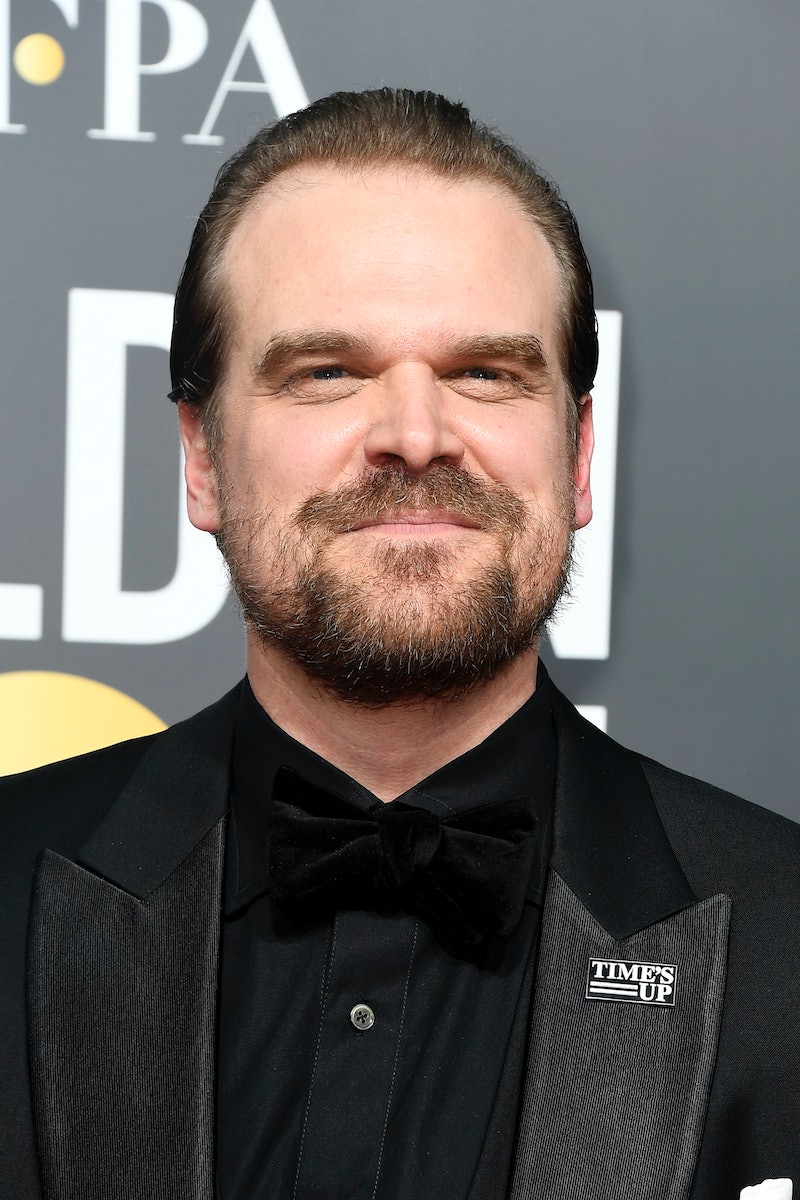 While many women on Sunday's red carpet are donning black outfits in solidarity with the Time's Up gender equality movement, some of the men are going a similar route with pins on their lapels. Stranger Things star David Harbour is aligning himself with the Time's Up campaign at the 2018 Golden Globes, and said in a red carpet interview that time is up on "women not getting the respect they deserve in the workplace."

It's a reaction we'd expect from the man who plays the beloved Hopper on Stranger Things, a show that doesn't shy away from showcasing complex, unique, and badass women. He's not alone, either. As men typically wear black to awards shows, many have chosen to emphasize their support for the movement with the "Time's Up" pins. Armie Hammer, Ewan McGregor, and Daniel Kaluuya, to name a few, have also been spotted with the subtle but powerful accessory.

The Time's Up campaign aims to ride the heels of the sexual harassment reckoning that continues to rock Hollywood, but do so while also bringing in women from all over all industries. It completely reshaped the conversations on the Golden Globes red carpet as men and women alike stood in solidarity with the cause. Some, like Amy Poehler, Meryl Streep, and Michelle Williams, even came with activists for these causes as their dates, giving them a huge platform with which to advertise their organizations.

"TIME’S UP is a unified call for change from women in entertainment for women everywhere. From movie sets to farm fields to boardrooms alike, we envision nationwide leadership that reflects the world in which we live," the organization's website reads. "Powered by women, TIME’S UP addresses the systemic inequality and injustice in the workplace that have kept underrepresented groups from reaching their full potential."

It is a big night for Harbour aside from the political statement he stood by as he walked the carpet. The actor is nominated for best supporting actor for his role as the gruff but lovable police chief from Hawkins, Indiana. He's up against the likes of Alfred Molina (Fued: Bette and Joan), Christian Slater (Mr. Robot), Alexander Skarsgard (Big Little Lies), and David Thewlis (Fargo).

It's Harbour's first Golden Globe nomination, and it's clear that he considers it a privilege. Following his nomination, he released a statement thanking the Hollywood Foreign Press. "Thank you HFPA for the great honor of being nominated for a supporting TV actor Golden Globe award this year, and for nominating Stranger Things in the best TV drama category as well. It's gratifying to be seen for my work and to be in a category with such esteemed colleagues," he said, according to the Los Angeles Times.

He also has a seemingly wonderful relationship with his co-stars. He's consistently posting support and praise for the rest of the Stranger Things team, and continued to do so as the statement continued, according to the LA Times. "My co-stars are all so inspired and inspiring to work with on a daily basis, and I surely wouldn't be nominated without the special chemistry I had this past season with Millie [Bobby Brown], Winona [Ryder], Finn [Wolfhard], Noah [Schnapp], Sean [Astin], Paul [Reiser] and all the rest. Their work makes me shine. They make it easy for David and Hopper to look good.”

Time's Up likely will continue to be a huge part of awards show coverage, continuing into the Academy Awards. It's been a long time coming, according to the women behind it, and even those who haven't necessarily been outspoken about these issues in the past are still expressing solidarity.