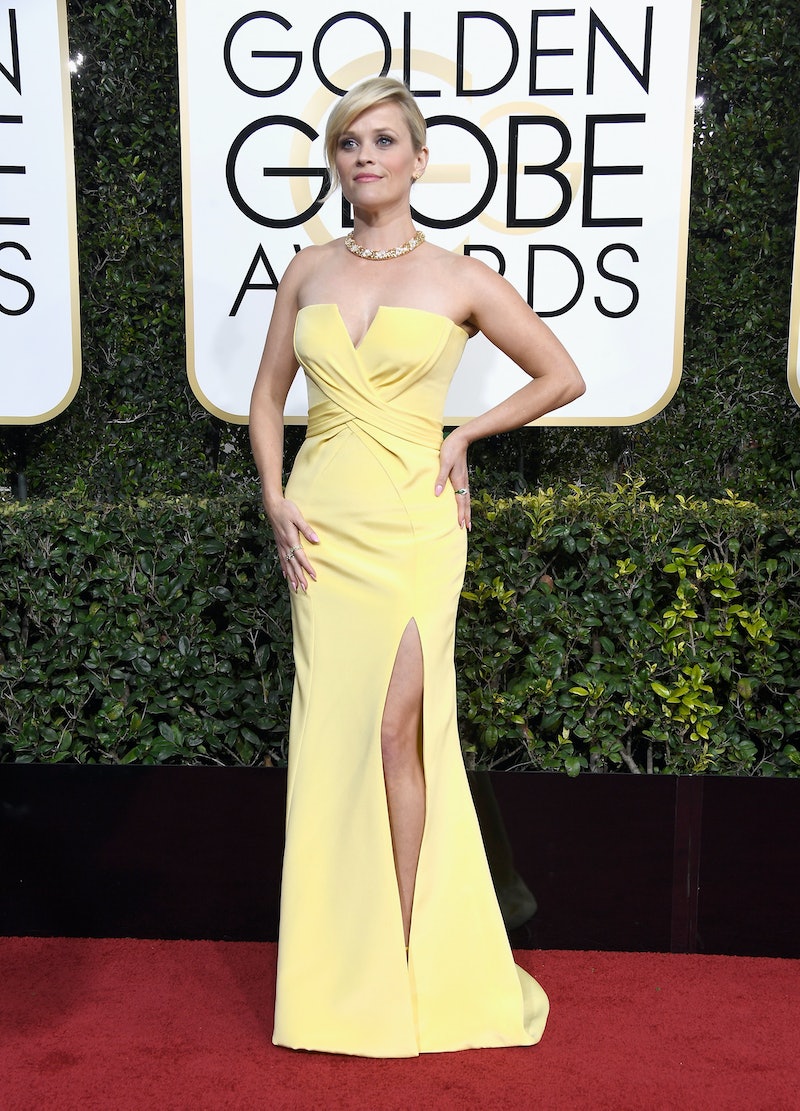 Priceless Lorraine Schwartz jewels, statement necklaces, and tiny, personalized clutches won't be the most talked about style trends on the red carpet of the 2018 Hollywood awards season. Instead, the Time's Up pin will be the most important accessory at this year's Golden Globes. The pin was specifically designed for the award's show to draw further attention to the country's sexual harassment problem, which affects Hollywood and beyond.

Actors of all genders are expected to wear the pin at the 2018 Golden Globes ceremony on Sunday, Jan. 7 — and it's a beautiful example of how fashion can act as an agent of change.

According to The Hollywood Reporter, the Time's Up pin is emblematic of the sexual harassment prevention initiative of the same name launched by Reese Witherspoon, Emma Stone, and Shonda Rhimes, among other prominent women in Hollywood. The initiative aims to end the silence surrounding sexual violence, harassment, and bias in the entertainment industry.

The pin, which features the name and logo of the organization, was created by designer and stylist Arianne Phillips, who has worked on Nocturnal Animals and W.E.. Phillips has done projects with Prada and Moschino's Jeremy Scott during her career, and has teamed up with Madonna and Lenny Kravitz for their stage ensembles. Phillips created the pin at the request of Witherspoon.

Phillips told The Hollywood Reporter that it was a major time crunch to create the pin, given the holiday season. She teamed up with L.A. jewelry designer Michael Schmidt and the duo hunkered down with few colleagues to create the Time's Up logo and the pin itself. They manufactured 500 pins in the U.S. in just two weeks, which is a pretty miraculous feat

Despite the stress and pressure of the time sensitive nature, Phillips was unfettered, telling THR, "I met so many great women, and it was such an honor to be called to action."

Besides the pin, Time's Up, which is funded by Witherspoon and other Hollywood insiders, also includes a legal defense fund for survivors, regardless of affiliation. There is a public GoFundMe site for those who wish to get involved and to further support Time's Up.

It's not clear at press time if the pin will eventually be available for purchase.

The pin isn't the only way fashion will do its part make a statement at the Globes, which officially kick off awards season. Actors are reportedly planning to wear black on the 2018 Golden Globes red carpet in a show of solidarity and support for accusers and survivors. While black is a color that is typically avoided by women on red carpets since it doesn't translate on screen and in photos, the industry is more concerned with calling attention to a critical issue with a unified look.

This Twitter user summed up all of the feels about the pin. Statement jewelry is taking on an entirely new and more important meaning with this pin and at this event. Since so many people will be tuning into the prize giving ceremony to see who wins and what they wear, it's a brilliant way to advance the cause.

It's becoming an annual tradition to call attention to important issues plaguing society at Hollywood events. Last year, celebs and actors wore blue ACLU ribbons with their glamorous ensembles on the red carpet at the Oscars. The ribbons represented the "Stand with ACLU" initiative, since the organization works tirelessly "to defend and preserve the individual rights and liberties guaranteed by the Constitution and laws of the United States."