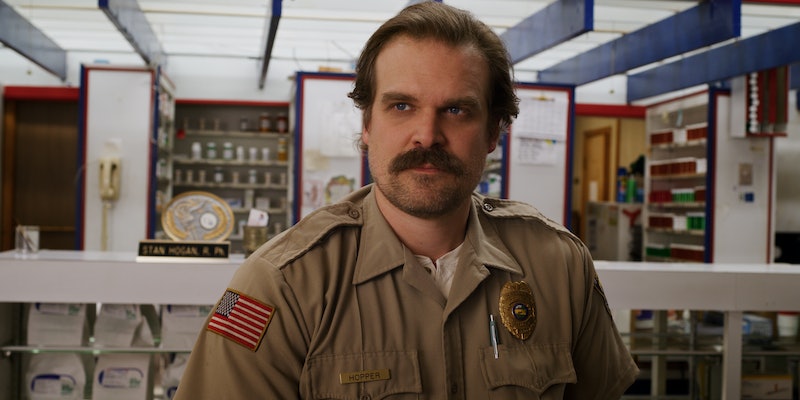 Sheriff Jim Hopper has been a hot mess since he first appeared onscreen, but the fact that he's a work in progress is what makes the character so appealing. In a new interview with Esquire, David Harbour discussed Hopper's role in Stranger Things Season 3, and while the actor was careful not to give any concrete details away, he did share that he believes his character's arc has always been about one thing: redemption.

In Season 1, fans meet Hopper as a shell of a man. He leans on alcohol and pointed barbs to mask the pain he feels over losing his daughter. By the end of Season 2, he's stepped into the role of surrogate father to Eleven and Hawkins truest (and most sarcastic) protector. That's a lot of character growth for just two seasons, but according to Harbour, the good sheriff still has more to learn.

"The Hopper arc has always been an arc of redemption," the actor told Esquire. "He's redeemed as a man with purpose or justice in Season 1, redeemed as a father, mostly, in Season 2, and in Season 3 we'll get another aspect of the redemption he needs."

Could this latest step in Hopper's personal growth be about claiming romantic redemption? It's no secret that his marriage fell apart after the death of his daughter, and he's been dancing around Joyce since the series began. It seems that the next logical step for Hopper is to realize he's not only worthy of love, but capable of being a caring and loving partner to someone else.

However, his more immediate journey appears to be wrapped up in his role as a father to Eleven. In Season 2, he sought to shield her from the world, and if the trailer for Season 3 is any indication, he's now going to have to learn how to let her go enough to grow and live some semblance of a normal life. At his core, Hopper is still learning and unlearning how to relate to the world, and that's a process Harbour seems to enjoy exploring.

The actor explained, "He is forgiving himself, and his ghosts are forgiving him slowly as well. But he still has a ways to go. He is reconciling what it is to be a man in this world. He grew up a certain way and he has to unlearn some of that, and cherish some of that as being his strength."

Ultimately, fans may not want Hopper to find too much redemption. After all, Hawkins is nothing if not incredibly dangerous, especially for people who are seen as "good" — just ask Barb and Bob. Over Memorial Day weekend, Harbour offered up another, slightly alarming clue about what Season 3 has in store for his character, as well as the rest of Hawkins' residents.

Per Complex, the actor told fans at the MCM Comic-Con that the Season 3 finale will be the show's most emotional episode to date. Speaking of the Eleven and Hopper bond in particular, he said, "You get to see a lot of that throughout the season and it's very unexpected what happens in the end and it's very, very moving. I think episode eight is the most moving thing we've ever shot."

As long as that moving finale doesn't end with Hopper completing his redemption arc and leaving fans crying into their Eggos, then we're all good.