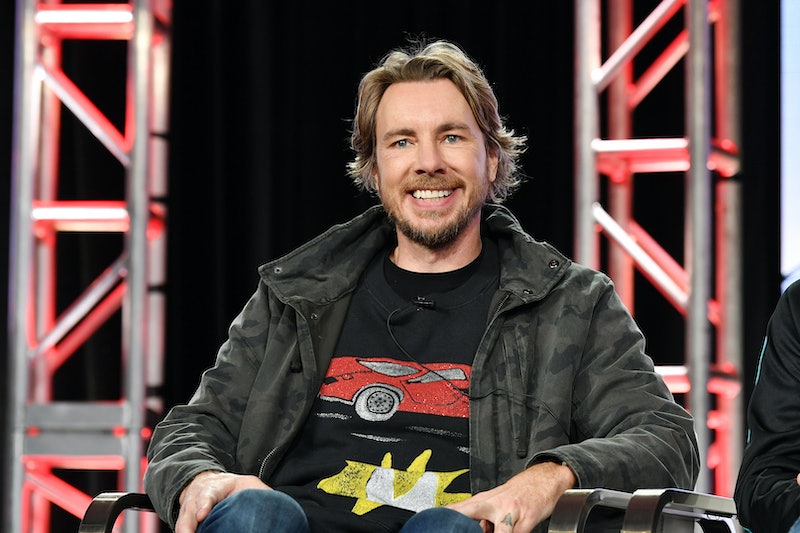 Following the incredible success of Netflix's documentary series, Tiger King, it seems like every celebrity has expressed interest in playing its outrageous lead character, Joe Maldonado-Passage (better known as Joe Exotic). But his wild profession might be a deal breaker for some people. While talking about the possibility of playing the famous zookeeper with The Hollywood Reporter, Dax Shepard revealed his fear of animals might keep him from playing Joe Exotic in a Tiger King movie.

The Parenthood actor and podcast host, who first shared his interest in playing the former zookeeper on Twitter in late March, has quickly become a top choice for Joe Exotic amongst Tiger King fans. However, while he is attracted to so many elements of Maldonado-Passage's over-the-top persona — "Physically, I can do mullet, mustache, guns, gay, I think," Shepard told THR — his biggest fear might be the one thing to keep him from actually accepting the role. "I am deathly afraid of large animals; it's the only fear that I carry around," he revealed.

"I have recurring nightmares that I'm in a room full of domesticated lions and tigers and a friend has assured me that they're safe and then they always attack me," Shepard confessed. Of course, he has a compromise to offer any future filmmakers interested in casting him in a Tiger King movie: CGI cats. "I'll do the kittens," he explained. "I don't mind losing a pinky, but a jugular? I've got to keep that safe."

Despite his apprehension about working with large animals on screen, Shepard told the outlet that he was drawn to the possibility of playing such a complicated and outlandish character as Maldonado-Passage. "I think me as an ex-scumbag addict who's kind of nice now, I feel like I have the goods," he explained. The actor also noted that he would be interested in playing any of the other people featured in the documentary because "those were my neighbors growing up," adding that he has "an endless soft spot for flawed people who I think are sweetie pies inside."

Even if Shepard's lobbying doesn't end up with him landing the role of Maldonado-Passage, he's enjoying being a part of the Tiger King casting conversation. (There is currently a limited series in the works based on the Joe Exotic: Tiger King podcast starring Kate McKinnon as Carole Baskin.) "I saw one [dream cast] last night and every actor on the board was twice as well-known as me, twice as much cachet, many [Oscar] nominees in the mix, and I'm like, 'Oh, wow, I'm being included with all these people. If nothing else happens, I feel so flattered.'"

Regardless of how potential casting directors feel about him playing Maldonado-Passage, Shepard has already earned the approval of the former zookeeper's ex-husband, John Finlay. (For the record, Finlay wants Channing Tatum to play him in the hypothetical movie.)

Of course, despite not having seen the documentary himself yet, Maldonado-Passage also has some strong feelings about who he thinks should play him on screen. "He would like Brad Pitt or David Spade to play him," filmmaker Rebecca Chaikin told The Hollywood Reporter. "He doesn’t refer to David Spade as David Spade — he refers to him as [the character] Joe Dirt." Looks like Tiger King fans will just have to wait and see whether its Shepard or Maldonado-Passage who emerges triumphant in any future casting of an on-screen Joe Exotic.

More like this
Bachelor Nation's Blake Horstmann Is Dating 'Love Is Blind' Star Giannina Gibelli
By Jake Viswanath and Radhika Menon
Move Over, 'Sunset'! The Drama-Filled Trailer For 'Selling The OC' Is Here
By Nola Ojomu
Here’s Everything Coming To & Leaving Netflix In July
By Grace Wehniainen
Jurnee Smollett’s Heart Is Healing
By Rebecca Carroll
Get Even More From Bustle — Sign Up For The Newsletter