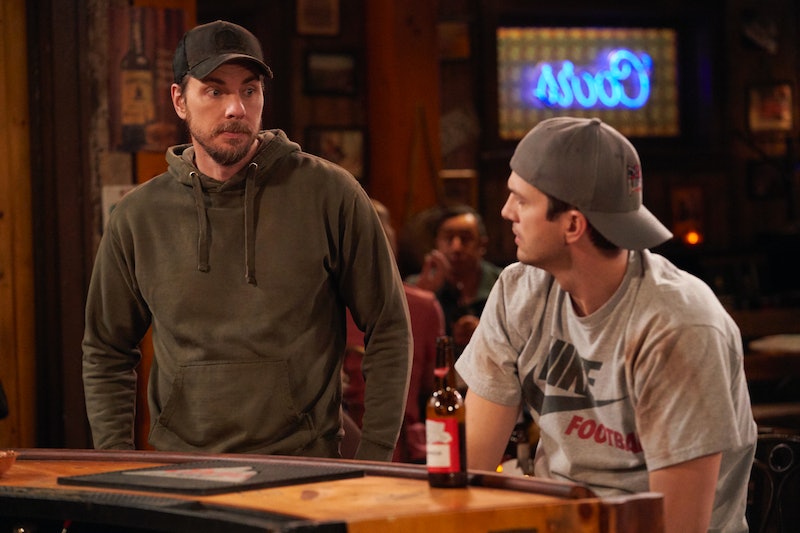 Following the departure of Rooster at the end of Part 1, Part 2 of The Ranch's third season will usher in a new arrival on the Bennett family farm. Inevitably, Parenthood actor Dax Shepard's character on The Ranch will bring a new energy to the cast's dynamic and shake up the series' storyline. But him coming onboard also marks a pretty epic reunion — and a dose of nostalgia for long-time MTV fans.

Shepard will play Luke Matthews, a solider who has a history with the Iron River Ranch and the town of Garrison, Colorado, even if he doesn't appear to be a familiar face to the Bennett family. He quickly forms relationships with Cole Bennett, played by Ashton Kutcher, as well as Bennett patriarch Beau, played by Sam Elliott. He arrives just after Rooster skipped town in Part 1 — a plot point written in after Netflix fired star Danny Masterson in the wake of multiple sexual assault allegations against him, all accusations which Masterson has vehemently denied.

However, while it may seem like Luke is meant as a replacement for Rooster, Shepard likely won't become a permanent fixture on the show. Deadline reports that the actor is not joining as a series regular, but rather as a recurring figure, and will instead be taking on the lead role in a Fox comedy pilot entitled Bless This Mess alongside Lake Bell. So, happy as fans will be to see Shepard onboard, the door is still wide open to a more longterm replacement for Rooster in The Ranch Season 4, which was confirmed back in June.

The casting of Kutcher and Masterson as brothers was a clear reference to their time together on formative late '90s / early 2000s sitcom That 70's Show, on which they played close friends. Now, with Shepard filling a similar role within The Ranch, some may recall his collaborations with Kutcher during the early seasons of seminal MTV prank show Punk'd.

Though Punk'd is Kutcher and Shepards's most well-known team-up, the hidden-camera celebrity prank show was a far cry from the sentimental drama and laidback laughs of The Ranch. Since Kutcher was already a recognizable star at the time thanks to That 70's Show and the success of Dude, Where's My Car?, Kutcher's involvement in the pranks mostly came from a behind-the-camera perspective, while Shepard was one of the show's field agents in the first season, helping carry out the pranks themselves. Shepard even had a key role in perhaps Punk'd's most famous Punk'ding: Justin Timberlake being told his assets and dogs were being seized by the government, which as Shepard told Marc Maron on Maron's podcast WTF, almost resulted in blows.

While there will almost certainly be no celebrity pranking present in The Ranch, the casting of Shepard is a smart choice to ensure that Luke and Cole have an automatic chemistry from the beginning. Kutcher and Shepard have maintained a friendship that is over 15 years long and running, and that will definitely show on-screen.