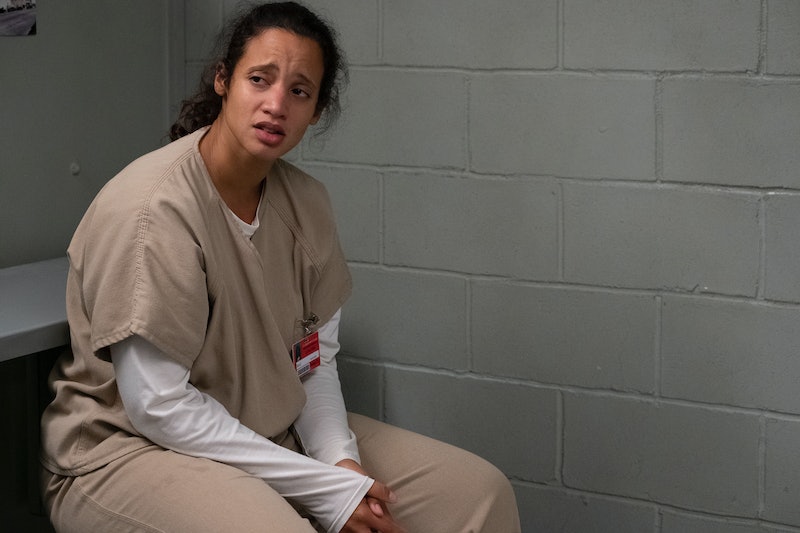 Spoilers ahead for Orange is the New Black Season 7. The Netflix series officially wrapped up the show's incredibly influential legacy and most of the main characters' story lines — except for Daya's. But now, actor Dascha Polanco has revealed Daya's fate in Orange is the New Black in an interview with The Hollywood Reporter. "They made it very clear to me that I don’t die," she told THR.

In Season 1, Daya joins her mother Aleida in prison, which prompts Aleida to smack her across the face in anger and disappointment. Aleida eventually gets out, but Daya receives a life sentence for shooting a corrections officer and inciting the Litchfield prison riots in Season 5. Right before Season 7's end, though, Aleida finds herself back where she began after violating her parole. She and Daya meet again, and they have an altercation similar to the first in Season 1, but worse.

Daya, who has evolved to be the mastermind behind the prison's drug ring and who has lots of power, informs Aleida upon her return that she is using her younger sister Eva to fuel her business from the outside. Aleida just wants to protect her younger daughters from being trapped in the same imprisonment cycle, so she acts out in rage and strangles Daya to the ground. The last time the two are on-screen, a guard is attempting to remove Aleida from a nearly asphyxiated Daya, and it's easy to assume she doesn't make it from her mother's grasp alive. According to Polanco, the show's writers told her that's not the case.

"I thought that she did. But the writers told me, 'She doesn’t die, but she gets knocked out really well,'" she said. "And I realized it was going to be left as that question. I acted that out really well, huh?"

Other characters received more final endings to their stories, like Pennsatucky's death by overdose and Alex's transfer to Columbus, but Daya and Aleida's uncertain ending is indicative of the vicious cycle their relationship represents.

"Her story is the product of a cycle that we, as a community, need to intervene in. If we really had a true justice system where it’s set up for incarcerated individuals to succeed, we would see less of this type of evolution," Polanco told THR. "Abuse of power is involved, [the cycle] of mothers and daughters and there are mental health issues that need to be addressed, as well as postpartum. There are a lot of things to address in there to help an individual evolve, educate themselves and get the support they need in order to not fall into this again."

Despite almost being killed, Polanco is sure that Daya will use the experience as a wake up call. "Daya is really a diamond in the rough. Although she’s not [finished], she learned how to love and how to fail and how to succeed to the best of her circumstances, and I respect her for that," she said. "I know that she’ll come back stronger than she ever thought she would. And learn some Spanish, maybe!"

Whether or not she learns Spanish remains to be seen, but everyone can learn something valuable from Daya's story.

More like this
Netflix Shut Down 'Bridgerton' S3 Rumours About A “Very Dark” Storyline
By Bustle
Bill & Frank’s 'The Last Of Us' Episode Has Twitter Emotionally Wrecked
By Alyssa Lapid
'The Crown' Season 6 Has Suspended Filming "Out Of Respect" For The Queen's Death
By Bustle Staff
'The Queen’s Gambit' Season 2 Tweet Wasn’t From Anya Taylor-Joy
By Mary Kate McGrath, Jack Irvin and Grace Wehniainen
Get Even More From Bustle — Sign Up For The Newsletter
From hair trends to relationship advice, our daily newsletter has everything you need to sound like a person who’s on TikTok, even if you aren’t.