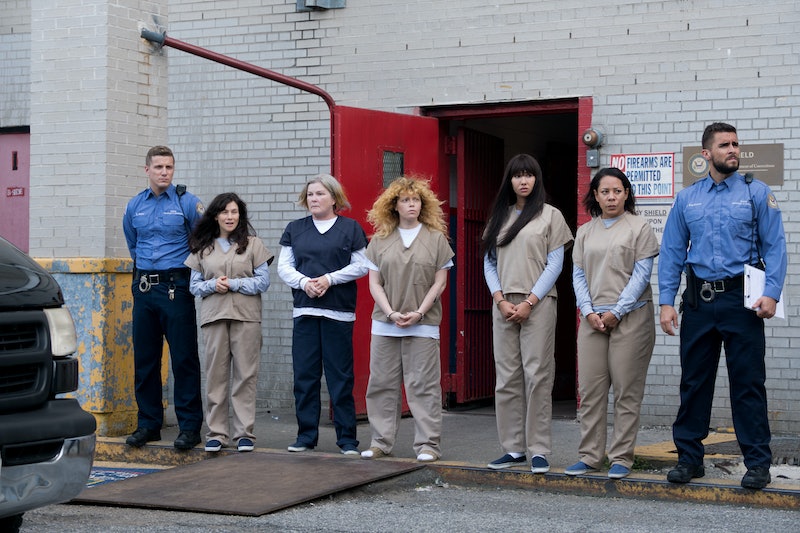 Spoilers ahead for Orange is the New Black Season 7. Pressing play on Orange is the New Black's seventh season sadly initiates the beginning to the end of an era. But thankfully, the OITNB series finale offers enough closure for fans to move on — even if they don't want to. Some of the characters featured in Season 7 have stories dating all the way back to Season 1, some were recently introduced, and others are brand new. But whichever the case, in 13 episodes, each of their intertwined arcs are finally put to rest.

Before getting into everyone's fate, you may need a quick Season 6 refresher. A bunch of Litchfield inmates — namely Piper, Alex, Suzanne, Pennsatucky, Blanca, Red, Nicky, Daya, Gloria, Lorna, Maria, Taystee, and Cindy — were sent to maximum security after the Season 5 riots. There, they established new friends, love interests, and enemies, and by the season's end, settled into their new normal. Piper got out on early release, reluctantly leaving to reintegrate to the outside world without Alex, and Blanca was "released" only to be immediately detained by Immigration and Customs Enforcement and dragged off. How did Season 7 provide closure? Let's discuss.

Piper Gets Her Happy Ending

Piper struggles to handle civilian life without Alex by her side. She lives with her brother, Neri, and their newborn baby, and after getting fired from her waitressing gig, smooths things over with her dad and gets an an administrative job at his accounting office. She's doing pretty well, all things considered, but she's not happy. Alex gives her permission to see other people in an effort to help, but when she starts to fall for a woman named Zelda and Alex realizes she's only complicating Piper's life, she ends their relationship. But they're married, and Piper persists. She loves Alex and wants to be with her, so she patiently awaits her release. The season finale finds her taking college classes and driving to visitation hours at Alex's new prison.

Alex is forced to smuggle and sell drugs, then phone chargers, by two different corrections officers. One, C.O. McCullough, just happens to fall in love with her, and when the feelings aren't reciprocated, Alex is punished for it. After Warden Ward is forced to fire two guards caught violating prison rules, McCullough admits her love for Alex and insists on Alex's transfer so she can keep her employment at Litchfield. The warden is already out two guards and has no choice but to comply. In the season's final scene, Alex seems happy in her new location, and is even reunited with some old friends: Boo, Yoga Jones, and Norma.

After finding a sense of stability and a friendship with Suzanne, Pennsatucky decides to take the GED exam. While studying, she learns she's dyslexic, but she works incredibly hard to prepare herself and pass. On test day, Luschek forgets to request extra time for her learning disability, and she's forced to fill in bubbles at random, assuming she failed. Feeling defeated, she impulsively relapses and overdoses on drugs provided by Daya. Taystee finds her dead in the laundry room and the inmates hold a memorial service. Taystee receives an envelope containing P-Tuck's diploma — she passed the GED.

After getting out on early release, Cindy is still guilt-ridden that her testimony against Taystee landed her former friend with a life sentence. She attempts to move back in with her family but is confronted by her daughter, who thinks they're sisters, with the truth. Cindy's mom kicks her out and she spends some time homeless (but employed) before reconciling with her family and promising to do better.

Gloria, meanwhile, is finally released and reunited with her kids after nearly getting additional time for being caught with a smuggled cell phone. Thankfully, guard Luschek admits to trafficking the devices, getting fired and letting Gloria off the hook.

Red is diagnosed with dementia and Lorna finds herself in frequent psychotic episodes after learning her infant son has died of pneumonia. The two bond over their lost senses of reality. In their final scene, Red sings Lorna to sleep with a Russian lullaby. Lorna sucks her thumb.

After grappling with her life sentence and nearly attempting suicide, Taystee is inspired to help others survive on the outside once they're released. She takes on teaching personal finance classes and, with an investment from Judy King, founds The Poussey Washington Fund, which provides micro-loans to ex-convicts in order to help get them on their feet.

So there will definitely still be trouble in Litchfield Max.

Fig and Caputo decide they want kids, and do everything they can to get pregnant. This includes a sperm-related surgery for Caputo and countless IVF shots for Fig. Eventually, though, Fig has an "Aha!" moment and feels compelled to adopt. Their story ends at an adoption information fair where a little curly-haired girl serenades them with Afroman's "Colt 45."

With the two experienced kitchen masters out of commission, Nichols has to step up to the plate. Her final scene finds her imparting her witty wisdom on her new crew in the ICE detention center kitchen.

Determined to help the wrongfully detained, Flaca uses her smuggled cell phone to gather information immigrants need to avoid deportation. They each hand her slips of paper as she delivers their lunch trays, and she promises to do the best she can.

Karla Is Stranded At The Border

After doing everything she can to defend herself in immigration court, Karla is deported back to El Salvador, but her young sons remain in the U.S. In her final scene, she is trekking toward the U.S. border with a group of asylum seekers, and she trips over the terrain, breaking her ankle. Unable to walk, the group's leader has to leave her behind. He says he'll come back, but there's no way of knowing for sure that he does.

It comes much later than it should have, but after much tribulation, Blanca and her lover, Diablo are finally reunited. Blanca receives help from Freedom for Immigrants and is released from detention. She flies to meet Diablo in Honduras, the country he's from. He was deported there, but they're so happy to be together that they don't care where they live.

When the credits start to roll, don't switch off the show right away. To officially and properly close a seven year tenure, the cast — including more minor characters that aren't in this list — does a curtain call and they say their goodbyes to the camera. Prepare to laugh and cry at the same time — just like you've done through all seven seasons.