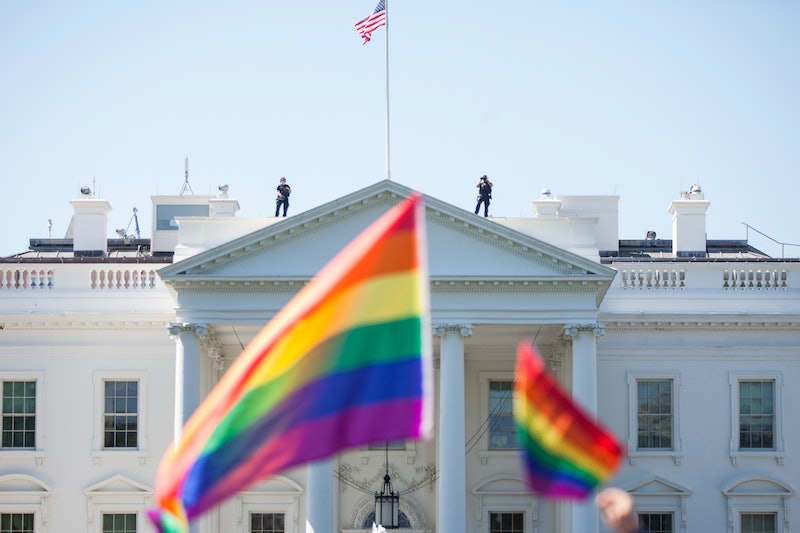 One of the main things I remember my friend Carl kept saying was, “This evening could have gone so differently.” And truly, it should have. Our motley crew — me, Carl, my other friend Ali, her roommate, and a few friends of friends — had been on our way to get burgers after spending our Saturday celebrating among hundreds of sweaty, beaded bodies and billowing Pride flags at D.C.’s Capital Pride parade earlier this month. But as we were making our way around Dupont Circle, the annual nexus for Capital Pride, we saw people running away from what we all thought was an active shooter threat.

As I started to run, I tripped, knocking my glasses off-kilter. I struggled to get to my feet and braced myself to be crushed under the stampede of people running. (Later, I’d find out that I’d scraped my leg and was bleeding, but I didn’t feel it.) I was able to push myself up and cram myself through the doorway of the Dupont Circle Hotel, the only shelter in sight. There were people filling up every nook of the hotel. I looked around for familiar faces, realizing some of our contingent had been separated. Ali was nestled under a service cart, crying. Carl, on the other hand, had a face that was dark and tight. With shaking hands, I texted our group chat at 7:26 p.m. “I’m a Pride at there’s a shooting I think! We’re in a hotel.”

Police would later tell us that the threat of an active shooter was a false alarm. No, no one actively roamed Dupont Circle with the intent to harm, according to D.C. police. (Days later, I’d read that a man brandishing a BB gun at Pride is what is thought to have caused the panic.) But the terror I experienced that day and that I carry with me now is anything but false.

My chest still constricts thinking about the girl in a rainbow-striped bodysuit and glitter eyeshadow who choked back sobs, telling the person on the other end of her call that she’d lost her friend in the stampede and couldn’t get in touch. I can still picture the service cart I’d hidden behind when I called my girlfriend to tell her “I love you” and gripped Ali’s hand as we waited for the all-clear. I was a few feet from the door and had positioned myself so that it was in my line of sight. Just in case.

It may have been a “false alarm,” but the trauma I experienced during Capital Pride is very real. Not only do U.S. citizens need to live with the threat of gun violence every day, thanks to the inaction of Congress, but as a queer person, I couldn’t help but think of the violence LGBTQ people faced to pave the way for us to even celebrate Pride — and the generational trauma LGBTQ people still live with today.

People on high alert in active shooter events, even ones that turn out to be false alarms, are “exposed to a trauma response which can be internalized ‘as if’ the event had occurred,” Dr. Nancy L. Beckerman, a gun violence trauma specialist at Yeshiva University, tells Bustle. Even people with no prior history of mental illness or trauma might report “acute anxiety sleep difficulty, nightmares, panic-like symptoms and difficulties functioning after surviving or witnessing gun violence,” Beckerman says. This can evolve into panic disorder, generalized PTSD, or avoidance and withdrawal.

With active shooter situations on the rise in the two decades since Columbine, this violence is often at the forefront of the American consciousness. But for people who identify with marginalized or multiply marginalized groups, gun violence is only one facet of the traumatic violence we face daily. Specifically within the LGBTQ community, the threat of targeted violence is ever present.

Pride month was born of the June 1969 Stonewall Inn riots where queer people — with trans women of color, such as Marsha P. Johnson and Sylvia Rivera, on the front lines — rose up against police who abused their power during a bar raid. Now, exactly 50 years later, protections for LGBTQ people are being rolled back near-daily, with potentially tragic consequences. In June 2019, Layleen Polanco, a trans woman of color, was found dead in solitary confinement on Rikers’ Island. Days later, Zoe Spears, another trans woman of color, was found dead in Fairmount Heights, MD — just a few blocks away from where Ashanti Carmon, another trans woman of color, was also found shot to death in March. So far, at least 10 trans people have been found dead in 2019, Human Rights Campaign reports. But the intersection with gun violence, too, is top of mind during Pride, especially after the Pulse nightclub shooting on June 12, 2016, which claimed the lives of 49 people — primarily LGBTQ people of color. I thought about Pulse when I was trying to figure out where in the kitchen would be the best place to hide.

Generational trauma can have real health effects, even if someone isn’t physically hurt.

While these touch points might be easy for cisgender and heterosexual people to ignore, queer people, especially queer people of color, can’t divorce ourselves from it. All we can do is seek to remember and work through it. As Beckerman says, “The trauma of a lifetime of being marginalized and unsafe, oppressed and unfairly treated by the power structures in society, can become internalized.” And with hate crimes against communities of color, the LGBTQ community and religious minorities on the rise within the past two years, it’s impossible to ignore the threat of targeted violence — especially at a large public gathering like Pride.

Generational trauma, combined with the constant threat of violence, can have real health effects, even if someone isn’t physically hurt during the traumatic event. “Since a person’s sense of self is rooted in their culture, this persecution is intimately intertwined with this,” Dr. Anna Filip, a physician at Christiana Care, a private hospital system, tells Bustle. “Persecution is often used to perpetuate marginalization of a person or community and this marginalization has long-term consequences in health.”

A 2017 study of 12,000 people from the Human Rights Campaign showed that 77% of LGBTQ teenagers surveyed felt depressed, and about 70% dealt with dealing with feelings of hopelessness and worthlessness. Further, 95% percent of LGBTQ teenagers have trouble sleeping at night and only 26% feel safe in their classrooms. A 2019 study from The Trevor Project, which surveyed 35,000 LGBTQ teenagers and young adults, found that 39% had considered suicide in the past year. And 76% of respondents said that the political climate had negatively impacted their “senses of self.” Again, to write the Capital Pride scare off as “just a scare” is to write off the very real trauma, and the health consequences thereof, that queer people carry with them everyday.

The car ride home from Pride involved a bit of recapping, and all of us saying over and over again how glad we were that we were safe. Soon, it dissolved into us deflecting. We joked about how mad we were that we never got Shake Shack, and Carl perused UberEats to see if we could remedy that. But when I got home, I stood on the sidewalk outside our apartment, and quietly sobbed into one friend's shoulder and my girlfriend's chest. I held them tight and thanked whatever twist of fate ensured I was there to cry on the sidewalk. That I had not become another statistic, like I had anticipated.