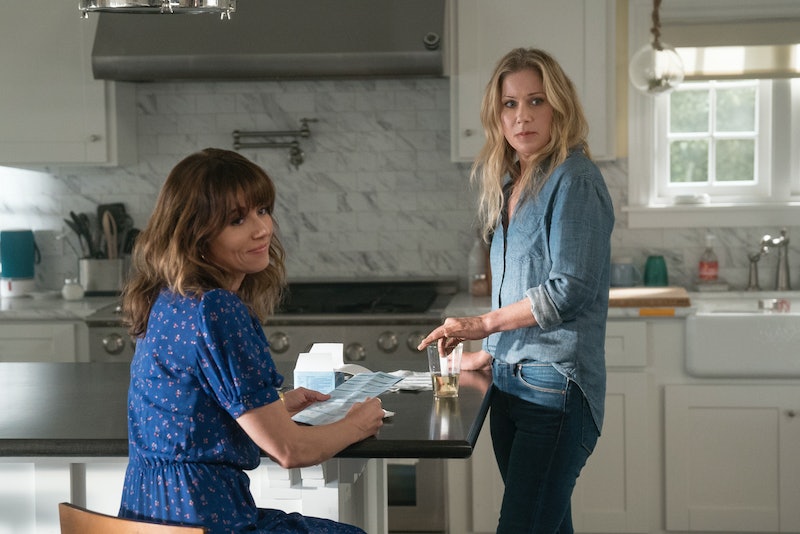 Grab your glass of chardonnay and your golf club and get ready to smash some windshields, 'cause the "white wine vigilante" and her twisted bestie are coming back to screen. That means it's also time to recap Dead To Me Season 1, because there's a lot to remember before it hits Netflix on Friday.

The story begins with a meet-cute between Jen Harding (Applegate) and Judy Hale (Linda Cardellini) at a grief support group. Jen is mourning her husband, Ted, who was recently killed in a hit-and-run while jogging. Judy is supposedly mourning the loss of her fiancé, Steve. The unlikely duo hit it off and become fast friends, chatting on the phone late at night and driving around town scoping out cars that look like they might have been involved in a hit-and-run. But everything's not what it seems with Judy…

Here's what else went down in the 10-episode first season.

Jen quickly learns that — to her astonishment — Judy's fiancé Steve is alive and well. Horrified at her new friend's deception, she cuts off all contact. But Judy shows up at the support group to explain. She did technically "lose" her fiancé: he left her after a series of miscarriages, which is the real loss that she's mourning. Feeling bad for her, Jen invites Judy live in her family guest house (and Ted's former studio).

Judy's reason for being at the support group isn't the only thing she's lying about, unfortunately. Meeting Jen wasn't an accident: Judy was the driver who hit Ted, albeit accidentally. Overwhelmed with guilt, Judy then sought out her victim's spouse, but was unable to tell her the truth. Eventually, Judy learns that Jen blames herself for Ted's death: the couple had a fight the night he was killed, which is why he left his house for a run in the middle of the night. To clear her friend's conscience, Judy admits to killing Ted — and a furious Jen kicks her out.

Before Judy admitted the truth, she and Jen went to a grief retreat, where Judy met and struck up a relationship with a man named Nick. After learning that her friend's new boyfriend was a detective, Jen asked Nick if he would investigate her husband's death. Jen then receives a piece of the car wreckage from the young girl who discovered Ted's body, and Nick is able to trace the part to a 1966 Mustang, greatly narrowing the focus of the search.

Detective Perez is the officer officially in charge of the investigation. Judy comes to her to turn Steve in for laundering money for the Greek mafia through his art gallery. While searching Steve's storage locker for evidence, Perez sees a conspicuous oil stain indicating a car had once been stored. After Judy confesses the truth to Jen, Jen goes to turn her former friend in — but Perez says a confession to a civilian isn't sufficient evidence, and isn't willing to jeopardize Judy's role as a witness in Steve's money laundering case.

Meanwhile, Jen has plenty of family issues to deal with as well. She learns that Ted was carrying on an affair with a waitress named Bambi at the time of his death. Needing money, she's forced to ask for a loan from her overbearing mother-in-law, Lorna. Her youngest son, Henry, is convinced that his father's spirit is living in a bird that comes to visit him. And her oldest son, Charlie, is dealing drugs he'd stolen from his dad's medicine cabinet — and is also caught with a gun in his backpack that he stole from Lorna. Jen takes the gun from Charlie and stashes it in the safe in Ted's studio.

Judy's fiancé may be handsome, but he's also a criminal and a narcissistic asshole. After confessing the truth to Jen, Judy empties Steve's bank account (which contains the Greek mafia's laundered money) to give it to her best friend as an apology — and then plans to die by suicide. Steve shows up at Jen's house looking for the money, and in the middle of their confrontation, reveals that he was also in the car when Judy hit Ted. Jen realizes the truth: kind-hearted Judy never would have driven away from Ted and left him for dead if the manipulative Steve hadn't forced her to.

Before she is able to die by suicide, Judy receives a call from Jen asking her to come over. Judy arrives at Jen's house and finds Steve's body floating in her friend's pool. Jen is standing over him, holding the gun from Ted's safe.

Did Jen shoot Steve when she learned the truth about his role in Ted's death? Did one of her boys, who have both been acting out lately, kill him to protect their mom? Did the Greek mafia show up looking for their missing money? What will Jen and Judy do next? Find out when Dead To Me Season 2 premieres on Friday, May 8.