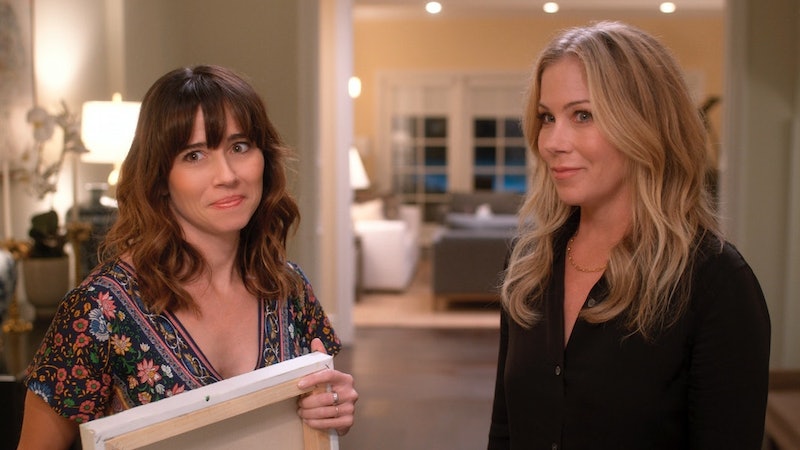 Spoilers ahead for Dead to Me Season 2. As it turns out, James Marsden’s return to Dead to Me as his own twin would not be the only buzzworthy cameo this season. Liz Feldman’s Netflix dark comedy returned for its sophomore season on May 8, and reunited its titular star, Christina Applegate, with her former Married With Children co-star Katey Sagal — and now, Dead to Me Season 3 just might include a Married With Children onscreen reunion, according to Feldman.

Season 2 picks up after the chaotic events of Season 1: Jen (Applegate) and Judy (Linda Cardellini) both grapple with the aftermath of Steve’s (Marsden) death after his and Jen’s bloody altercation. Season 2 also introduces Judy’s incarcerated mom for the first time, played by Sagal. In an interview with TVLine on May 10, Feldman discussed the “wonderfully ironic” casting of Sagal as Cardellini’s mother after she famously played Applegate’s mother, Peggy Bundy, in Married With Children. While Applegate and Sagal share no screen time in Season 2, Feldman coyly teased a future Bundy onscreen reunion and said, “At the very least I want to give you hope.”

When Sagal’s name appeared in the mix, Feldman said she “just started laughing.” She told TVLine, “I was like, ‘Oh my God, that’s insane and I love it.’” She then approached an “absolutely thrilled” Applegate, who “immediately put in a call to Katey to encourage her to come on board.” Feldman said, “Christina adores Katey. She really is like a mother to her.”

While Dead to Me has yet to be renewed for Season 3, the second season concluded with a major, full-circle cliffhanger. Given its critical success and various award show accolades since its debut, a renewal is likely. Feldman is ready to dive in, too. In an interview with Refinery29 on May 9, Feldman revealed she has even more secrets up her sleeve. "I do think there's some more story to tell. I know exactly what I would want to do for the third season,” she said. “Especially now that you know how Season 2 ends. Now there's somebody else with a secret.”

More like this
'That '90s Show' Star Callie Haverda Got Advice From Mila Kunis & Ashton Kutcher
By Brad Witter
Here’s Why Danny Masterson’s Hyde Isn’t In 'That '90s Show'
By Brad Witter
Ashton Kutcher Wants Danny Masterson “To Be Found Innocent” In Rape Retrial
By Jake Viswanath
At 28, Debra Jo Rupp Was Living A Much Different '70s Show
By Grace Wehniainen
Get Even More From Bustle — Sign Up For The Newsletter
From hair trends to relationship advice, our daily newsletter has everything you need to sound like a person who’s on TikTok, even if you aren’t.