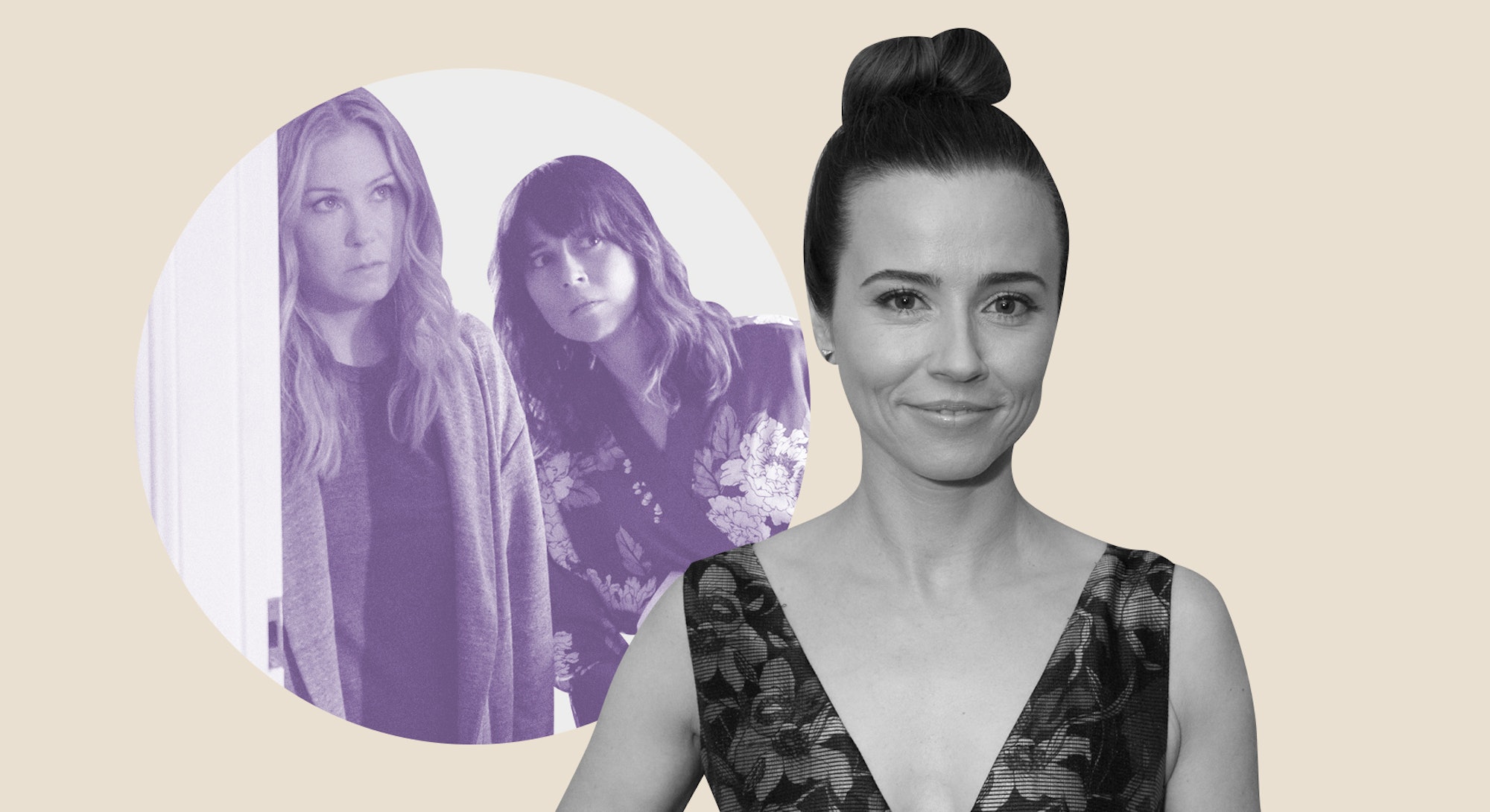 Judy Hale aims to please. In Season 2 of Dead to Me, Linda Cardellini’s relentlessly nurturing character meets an intriguing woman named Michelle (Natalie Morales) while she’s moving her mother into the nursing home where Judy works. What could be a passing interaction turns into a blossoming friendship when Judy’s caretaker mode goes into hyperdrive, offering the seemingly stressed out Michelle coffee, pudding, weed. Michelle takes her up on choice number three and Judy’s eyes widen, as if they were screaming: a friend.

Throughout the series, audiences have seen Judy serve herself up on a silver platter, contorting herself to the needs of her toxic former fiancé Steve (James Marsden) and her brash, Brooklyn-bred best friend Jen (Christina Applegate). It’s an impulse the actor can relate to. “Judy just craves connection and acceptance by somebody,” Cardellini tells me over Zoom from Los Angeles, where she’s quarantined with her partner, daughter, dog, and pet snail. “I think people are mostly looking for connection. It's one of the things that draws me to what I do. As a person, I love people. [I’m like], ‘Can I give you a hug?’ It's also very Linda.”

Cardellini, 44, first broke onto the scene as Lindsay Weir in Judd Apatow’s cult classic series Freaks and Geeks. Though the show was short-lived, Cardellini’s magnetic portrayal of a mathlete looking to trade in her trophies for some teenage trouble soon made her the go-to for playing a specific type of intelligent loner in projects like Scooby Doo, ER, and to an extent, Legally Blonde. “I think the thing that a lot of those characters have in common is they're searching,” she says. “Lindsay doesn't fit in with who she’s supposed to be and is looking for something deeper with others. [Scooby Doo’s] Velma wants to be part of the group, but she's also just her own person. All of those people are searching for way deeper connections.”

“I think people are mostly looking for connection. It's one of the things that draws me to what I do. As a person, I love people. [I’m like], ‘Can I give you a hug?’ It's also very Linda.”

In Dead to Me, Cardellini’s character finally finds connection in the venom-spewing yin to her meek, wounded yang. Judy and Jen aren’t exactly “friendship goals.” The two meet when Judy follows Jen to her group therapy for grieving spouses and poses as someone who has just lost her fiancé out of guilt for accidentally killing Jen’s husband; season 2 opens (spoiler alert) shortly after Jen murders Judy’s ex Steve. But despite their differences — and perhaps because of their strange, murder-y circumstances — in each other they feel seen. It’s a feeling shared by the actors who portray them.

Though Applegate and Cardellini hadn’t crossed paths before becoming co-stars, it didn’t take long for them to bond over their decades of experience in the industry (Applegate also first made a name for herself in a 90s sitcom, Married... with Children), being mothers of young daughters, and an excitement for giving meaty roles to 40-something women on screen. Reviews of Dead to Me praised their natural rapport, which according to Cardellini has only deepened with time. “There’s a big scene at the end of Season 2 where some things come to light and Judy gets hit with some hard truths,” she says. “These [types of] scenes where Christina and I have to go head to head always end up stripping us the most raw when it's her and I. It's actually really wonderful for our friendship because after the scene we hug each other and talk. We grow closer.”

Reflecting on their time filming together is emotional for Cardellini. There’s a lot she’s missing about the world right now, and the camaraderie of a film set is chief among the experiences she’s yearning for. “There are everyday things that now in quarantine you can't do. You end up missing saying hello to somebody at a coffee shop that you see everyday or whatever that [thing] is [for you],” she says. “A lot of us, not all of us, but a lot of us thrive on community in some way, shape, or form.” The preternaturally warm, people-loving actor finds that sense of community is best embodied in the late nights spent at the craft services table with her co-stars and crew.

“I’m looking at the show being released as a celebration of all that time we got to spend together in close quarters. It’s actually got me emotional,” she says, breaking the veneer of a calm, composed star promoting her new show in a pandemic. She takes a moment to wipe her tears before continuing. “One of the things I really love about my job is the sense of community you have. Sometimes [there will be] a couple hundred people on set, all working towards the same thing. Hopefully we’ll get to do that someday.” One day soon, she’ll find that connection again.